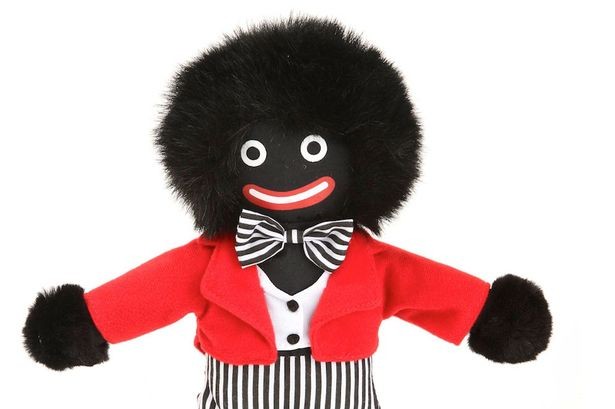 So the other day I posted about these golliwog dolls that were being sold in a shop in my neighborhood.

My neighborhood is pretty diverse. I’ve lived here for 10 years and I know shop owners pretty well and I feel as if I have a good rapport with them.

This shop is pretty new maybe a couple years old and it sells some nice things like jewelry, and clothes, hats and what not. You can get the standard “hippy’ gear in there (tie dye dresses, beads, scarves). So on this day while walking past I was stunned to see these black dolls in the window front.

I stood there for about 10 minutes in surprise. My surprise turned to a wtf moment and then to curiosity as to why this is in this shop. I have had many conversations with the shop owner and she seems like a really nice woman. While standing there I thought how was I going to calmly ask why was she selling these dolls in her shop.

For those who don’t know what a golliwog is it was a character in kids books in the 19th century and it was described as being a scary black gnome who turned out to be friendly. The author based this off of a rag doll she found and decided this would be a good idea for a “scary”character in the book.

So these books were very popular in Europe. So in the beginning there were no negative connotations to the character. It was later in Enid Blyton books when these characters that had a resemblance to the dolls that it started to have a negative name attached.

In the books the villains looked like the dolls and they perceived as sinister and menacing . By this time during WW II “Wog” was a slur used against darker skinned people. So by the 60’s the term golliwog began to have a racist connotation to it. This doll also contributed to the black face character which was later on to be labelled as racist towards black people.

When it got to the US it was boxed in with other anti black caricatures such as “mammies”, “pickanninies”, and “minstrels”. The point is that this doll may not have started out with bad racist intentions but today in 2015 we now know this to be a racially insensitive object, especially to black Americans.

SO now here I am standing in front of this shop front in my cool diversified neighborhood where you would not expect to see such a thing wondering how do I approach this woman. So I say fuck it I’m just going to go in and ask her where she got them from.

Well she wasn’t in there (lucky for her) but a young lady was working so I asked her did she know about the dolls. She looked at me in surprise and said she didn’t because they must have been put in on her day off but she was also surprised that they were there.

Now that was interesting because this young lady was younger than me and she was not black!

So why would she be surprised?! She said she knows the origins of this doll and how offensive it is and she was just as surprised as me that the owner would sell such a thing in her shop. So here is a young non black woman who knows the history of this doll so why wouldn’t an older woman who is older than both of us not know.

So now I’m really confused. I tell the young woman that this doll is highly offensive and I want to let the owner know that it’s not acceptable especially in this neighborhood and she agreed that she would tell her and that she also thought they should not be there.

We talked for a while and then she decided while I was leaving that she was going to take the dolls out of the window and let her boss know why when she saw her. I commended her for making that decision on her own and thanked her for her time of talking to me be about it. I went home thinking that so many people feign ignorance when it comes to race issues here because there was never that history here.

Those dolls were popular here in Australia but it didn’t have the negative connotation that it had in the States. Even so that doesn’t make it right to sell these dolls in shops like it’s just a novelty toy that was once a rag doll/ character in a children’s book. This doll is more than that.

It represented generalities that black people today still have to face. Black skin in not beautiful, black is sinister, black is menacing, blacks are the villains, black is for entertaining the white man. This doll was popular in a time period where blacks were seen as not human and only property.

It was created during a racist era. It is not just a doll it represents more than that and I should not have to walk in my neighborhood in 2015 and see this doll in a shop front window being sold as a “classic” toy and be taking back to that time where I would not have been even able to walk in the same shop as everybody else.

No it was not acceptable. It is offensive and racially insensitive! I have recently walked past the shop and the dolls were not there. I haven’t spoken to the owner but I will when I feel the need to.

I still want to get her perspective on why she had the dolls just so I can see for myself if she was being malicious or was she just ignorant. I feel as though she knew but didn’t think that anyone would have a problem with it.