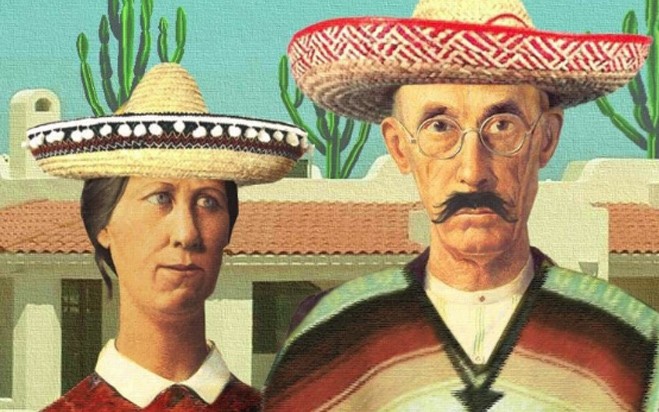 Mail arrives, telling me that by going to Mexico I have sold out, fled, abandoned the United States. I’m a coward, some of my correspondents say, and a traitor.

Anyway, they’re upset, which is irrational. They think that just because I went to Mexico, I left the US. They don’t understand. I didn’t leave the United States. It left me.

It was a bait-and-switch operation. I signed on to one country, and they slipped another in under me. I want my money back.

In the country where I grew up, if you found a naked intruder in your daughter’s bedroom with a Bowie knife and a hard-on, you shot him and arranged to have the rugs cleaned. The sheriff wasn’t greatly interested and the country prosecutor didn’t see anything to prosecute.

Today you would be charged with the use of excessive force. The cadaver’s family would sue. They would end up with your house unless they just ran you broke with legal bills. The outcome would depend on the racial make-up of you, the intruder, and the jury. Your daughter would be married with grandchildren before the courts reached any conclusion.

When I used to have the police beat for the Washington Times in the Yankee capital, the cops told me, dead serious, that if I ever shot an intruder, I should shoot him again to make sure: You can’t afford to have two stories, they said, especially if he’s black which, in Washington, was a foregone conclusion. They’ll hang you, said the cops.

In the country I grew up in, you got on an airplane by walking up these funny little steps with wheels on them. Then you sat down. That’s all you did.

I know, I know: You don’t believe this. It’s true. You just walked on. Further, the stewardesses were not merely civil but—so help me—friendly. Flying was actually enjoyable. The seats were big enough that you didn’t sit with your knees beside your ears and your feet in your pockets.

Now, getting aboard is like going into max security at some ghastly penitentiary. I once flew a bit around the old Soviet Union, as distinct from the new one, on a junket. Security was less oppressive, though the food was marginally worse unless you liked green chicken. The service was just as sullen.

Maybe that’s what I miss most about the Old Country. People were courteous.

I think people were courteous also because they lived in an agreeable country and were pretty happy with things. The new country seems angry—quietly so, not sure what to do about it, but looking for someone to hit.

The Old Country the music was vibrant, vigorous, much of it springing from the great black bluesmen of Mississippi and then Chicago, some of it from the mountains and the jazz dens of the big cities. In the music of the new country, the whites whine and the blacks grunt angrily. From Tampa Red to rap is a long way down.

In the country I signed on to, things worked on the principle of individual responsibility.

If you robbed a bank, which people generally didn’t, everyone figured you did it because you decided to, and you went to jail and everyone was satisfied, except you, which was the idea.

Most people knew how to behave, and did. It saved a lot on police departments and you could walk around at night.

In the old country, the government was pretty much benign or actually useful. It built roads and largely left you alone. The public schools were not great but neither were they terrible. People ran their own lives. The federal government tended to be somewhere else, which was a splendid place for it, and you mostly didn’t notice.

In the country that is now where America used to be, the government is the cause of most major problems instead of a solution, however inefficient, to a fair number of them.

The government keeps you from educating your children, holds standards down, prevents you from hiring the best people you can find to work in your business. It won’t allow local jurisdictions to control crime, prevents localities from enforcing such moral standards as they see fit, virtually illegalizes the religion, of most of the population, and generally won’t permit people to live as they like.

Now, I used to be fond of the United States. Granted, I wasn’t much of a patriot. The word nowadays seems to mean one who doesn’t so much love his country as to dislike other people’s. I figured live and let live.

A lot of other countries struck me as fine places. But America was my favorite. It just suited me. I liked the people in their wild variety and the countryside and the music and the brash independence.

It wasn’t perfect. Still, given the sorry baseline for comportment in human agglomerations, it was about as good as you could get.

I’m still fond of the United States. I just can’t find it.