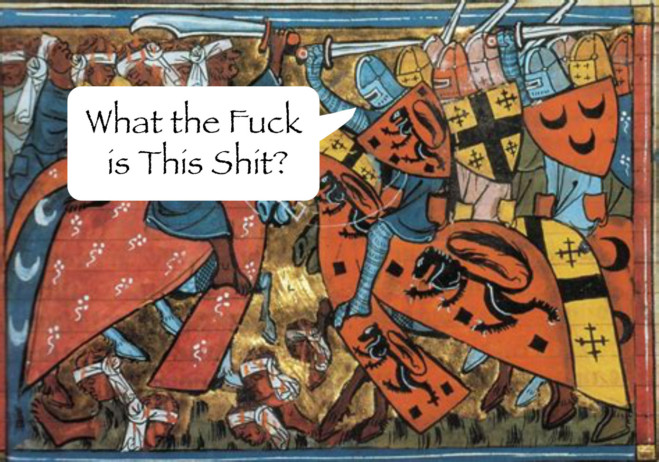 There’s a stupid fucking idea going around that goes like this: Everything was swell and peaceful in the Middle East until those nasty Christian Crusaders rode in and started hacking the sweet lovable locals to pieces.

First of all, history did not magically start with the Crusades, and people before that weren’t just sitting around the campfire singing fucking songs.

Thousands of years before either Christianity or Islam existed, people were fighting over the place. Egyptians, Canaanites, HIttites, Persians, Jews, everyone.

Eventually, Rome kicked everyone’s ass and took over. And right around the Roman takeover something relevant to the ‘crusade’ myth happened. There was a guy called Jesus who walked around doing magical shit. I mean, you can’t have a Christian crusade without a Christ, and here he was, Jesus Christ Superstar. Anyways, the Romans didn’t like his show, so they nailed him to a cross for doing magic without a license (or something like that).

The Romans had bigger problems back in Rome with a bunch of barbarians, so while they weren’t looking the sneaky Palmyrans took over in the Middle East.

After a super-barbarian by the name of Constantine took over Rome, he decided he wanted the Middle East back too. A dream told him he’d win if he painted crosses on his troops, so he converted to Christianity, beat up the Palmyrans, and retook Syria and Israel.

It was at this moment that the West became Christian. Constantine told all the useless fucking bureaucrats around the Roman Empire that if they wanted to keep their jobs, they had to convert to Christianity too. Presto-chango, out with Zeus in with Jesus.

He didn’t trust the douchebags back in Rome, so he built a New Rome, a new capital city for the eastern part of the empire, the first city founded by Christianity: Constantinople.

Constantine really wanted everyone else to convert to Christianity. He was kind of a dick about it actually and the current residents of the ‘Holy Land’ weren’t all that interested. The Jews in particular did not want to convert, they said, “Son of God my ass, that Jesus kid used to throw rocks at my goat.”

But what about the Muslims? What did they have to say about it? NOTHING. There was no such thing as Muslim at the time. Mohammed wouldn’t be born for another 300 years.

THE MIDDLE EAST WAS RULED BY CHRISTIANITY BEFORE ISLAM EXISTED.

Christianity continued to spread throughout the Middle East for the next 300 years, with major religious centers at Jerusalem, Antioch in Syria, Alexandria in Egypt, Constantinople in Turkey, and finally Rome. Four of the five Holy Christian Cities were in the Middle East.

Not everyone was happy about this. It was mostly bad news for Jews. And the Arabs weren’t impressed with being told to obey the magic books of the Christians and Jews, so some Arab guy wrote his own magic book. And surprise surprise, his magical book said that he ought to be in charge and that anyone who disagreed was an asshole.

People liked his book. It became a bestseller. So what happened next? Did the newly founded ‘religion of peace’ spread love and tolerance throughout the region? No.

And they did not stop. They kept on capturing territory and subjugating infidels. Syria, Persia, Libya, Morocco, and on and on until the Islamic Caliphate was twice the size of the Roman Empire at its peak
So the idea that the Middle East was a peaceful place until Christian crusaders invaded the place is absurd. The exact opposite of reality.

The Christians were already there, along with the Jews and others for hundreds of years. Whatever sins the Christians and Jews may have been guilty of before that were NOT against Muslims, because there were no Muslims.

But after the founding of Islam, the Muslim conquest went on for 400 years before the First Crusade. FOUR-HUNDRED FUCKING YEARS before the Christians got tired of turning the other cheek. The First Crusade re-captured the holy cities of Antioch and Jerusalem, set up a Kingdom of Jerusalem, and mostly went home.

And besides, what did the Muslims do? Did they sit around the campfire crying about how mean and nasty those darn Crusaders were? No. They went right back to being mean and nasty themselves as they took those cities back and tried to conquer Europe.

They ruled over Spain for 700 years, only being ejected in 1492. They failed to take France, but they captured Constantinople in 1453, the first city founded on Christianity, and still hold it today. They call it Istanbul now, and Christian prayer is forbidden at what was the largest Christian cathedral in the world for nearly a thousand years.

And still they did not stop.

By 1529 they were at the gates of Vienna, and again in 1629. And there, finally, the Islamic military conquest was stopped. For hundreds of years, hundreds of thousands of Muslim soldiers were deployed to attack and subjugate formerly Christian lands, well into Europe.

While the crusades were a handful of brief military excursions waged not to conquer new territory, but to retake what had been lost. And though they had brief successes, they all eventually failed.
So were the Crusades the origin of the conflict in the Middle East?

Are the ongoing conflicts in the Middle East all the fault of those nasty Crusaders?