Imagine that you could pay for anything with an IOU that you scribble on a piece of paper. Wouldn’t that be great?

Very convenient. And imagine if when the person wanted to be paid “for real,” that you could pay with an IOU for more IOUs!

This pleasant arrangement is an accurate description of the system we have been enjoying since 1972. 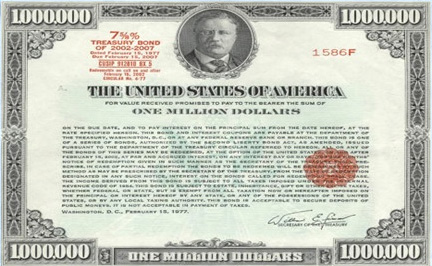 Before 1972, the system was much the same, but with one important difference. The government would convert IOUs to a “for real” payment in gold.

The US dollar was “good as gold” as they used to say.

But because of the huge debts incurred by social spending programs and foreign wars, and because those expenses created nothing of value that could be traded, more foreign holders of dollars began insisting on taking “for real” payments in gold.

But the US did not have enough gold to pay all its creditors, so Nixon closed the gold window.

Not because he was a mean guy, but because the policies of his predecessors would bankrupt the nation if forced to pay “for real.”

But the dollar held on as the world’s reserve currency.

1. Oil.
The US had made treaties with the Arab nations that they would conduct all oil sales in dollars only. Thus any nation who depended on Middle East oil, and that is just about every nation, would have to purchase dollars first.

2. Fear.
With nearly every nation holding a large quantity of U.S. Treasury debt, a default in the system would mean a loss of what is owed to them. In the case of China and Japan that is around a Trillion dollars—each.

Yes, all those inexpensive cars, electronics, and junk at Walmart are inexpensive because we don’t pay for them “for real,” but only with IOUs for more IOUs.

A question raised by the ratings agency Fitch regarding the recent Government shutdown:

“this ‘faith’ is a key underpinning of the U.S. dollar’s global reserve currency status and reason why the U.S. ‘AAA’ rating can tolerate a substantially higher level of public debt than other ‘AAA’ sovereigns.”

This “faith” is a state of mind that goes both ways, as the US needs the “confidence” of foreign investors. And as Fitch is hinting, the permanence of this two-way state of mind is far from guaranteed.

Sure, the fear that China would lose faith in America’s commitment to honor its $1 trillion in Treasury holdings — a popular notion during the 2008 crisis — has since proven overblown.

But that doesn’t mean China and other nations don’t question from time to time whether the dollar deserves to hold its reserve currency status.

When the Congressional Budget Office published a projection showing the deficit at 21% of GDP by 2050, one could not blame the Chinese for considering alternatives.

Indeed, the speed with which China is internationalizing the yuan can only be aimed at turning its currency into a rival to the dollar.

Ever since Richard Nixon closed the gold window, the dollar’s value has been based upon nothing more than faith and circular logic.

But this is not a static state. People’s perceptions change with time. And the times they are a changing.

If America’s ballooning Medicare and Social Security debt are not brought under control, the debt problem will instead be fixed through inflation.

That would amount to a de facto default on foreign investors, who would lose money via exchange losses.

Any investor who fears such a thing won’t wait for it to happen. But if enough start acting on this fear, they would deliver a self-fulfilling prophecy.

That might seem a bit far-fetched right now. As in fact, the dollar is currently being helped by crisis elsewhere.

The Euro is a basket case, Japan has its own debt problems, the Middle East is in turmoil, and emerging markets are reaching the limits of their once rapid growth.

On a relative basis, the dollar looks good.

But as Euro member nations recently discovered, investors can lose their confidence in a countries’ political system quickly.

If Washington continues on its current path, it too might suffer a loss of “faith.”

For all debts are discharged one way or another, either they are paid, or they are defaulted on — eventually.

The only thing left to figure out, is the meaning of “eventually.”