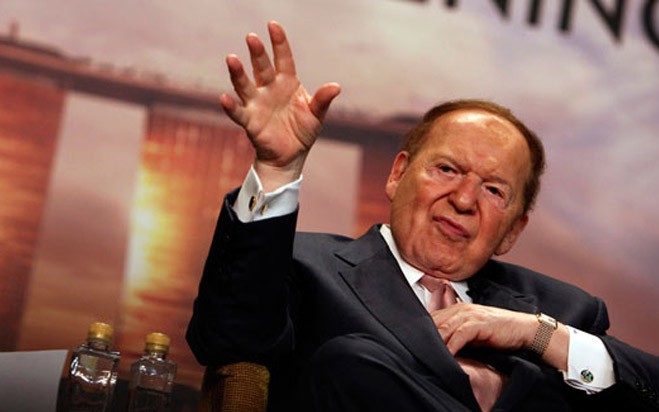 One by one, they snuck into Vegas to dance for the godfather’s blessing.

In the 2012 campaign, Adelson single-handedly kept Newt Gingrich in the race – long after everyone else knew that Newt was going nowhere – with an infusion of $15 million. After Newt dropped out, Adelson then sank another $30 million into Romney’s campaign.

It’s no wonder that so many GOP hopefuls want to be Sheldon’s new best friend. Or as his press secretary put it, “The ‘Sheldon Primary’ is an important primary. … anybody running for the Republican nomination would want to have Sheldon at his side.”

In choosing a favorite for 2016, Sheldon’s political advisor said, “the bar for support is going to be much higher. … There’s going to be a lot more scrutiny.”

Victor Chaltiel, an Adelson friend who sits on the board of Las Vegas Sands, says that Sheldon “doesn’t want a crazy extremist to be the nominee.” And Shawn Steel, a California GOP money man, says Sheldon is a “very rational guy.”

But last fall at Yeshiva University, this “very rational guy” shared his ideas on U.S. negotiations with Iran:

“What are we going to negotiate about? What I would say is, ‘Listen, you see that desert out there, I want to show you something.’ You pick up your cell phone and you call somewhere in Nebraska and you say, ‘OK let it go.’

“So, there’s an atomic weapon, goes over ballistic missiles, the middle of the desert, that doesn’t hurt a soul. Maybe a couple of rattlesnakes, and scorpions, or whatever. And then you say, ‘See! The next one is in the middle of Tehran. So, we mean business. You want to be wiped out?”

Adelson’s response was recorded by Philip Weiss of Mondoweiss website. Weiss says the audience cheered Adelson’s proposed nuclear strike on Iran and no one on the stage, including several journalists, peeped a word of dissent.

And this is a “very rational guy,” who doesn’t want “a crazy extremist to be the nominee”?

It is no secret which GOP candidate Sheldon considers a “crazy extremist.”

Senator Rand Paul has taken a strong stance against interventionist foreign policy, going so far as to write an op-ed for TIME Magazine explaining why the US should stay out of Syria. A few days after Paul’s article, NBC reported that almost 60 percent of Americans agreed with him.

Sheldon Adelson was not one of them.

The attacks on Paul since then have been on the rise. A personal hobby of The Washington Post’s Jennifer Rubin who has penned articles including:

The fact that Sheldon Adelson views Paul as a threat, and Jennifer Rubin thinks he is worthy of so much attention is a testament to how much impact Paul has had on Americans, and on the GOP.

That Americans are tired of foreign military adventures without purpose or end should not be a surprise. Recent polls show that the majority believes that America should, “mind it’s own business.”

Rand Paul agrees, and will not alter his view no matter how much money is on the table, and regardless of attack ads and a hostile press.

In a world of spineless politicians who grovel at the knee of big money backers, maybe a politician with unwavering principles such as Rand Paul, could be called an “extremist.”

But perhaps the GOP should consider that Americans are tired of successive Democratic and Republican Presidents meddling in foreign countries.

Although not perfect, Rand Paul’s foreign policy reflects the preference of everyday people on both the Left and Right, and though a pro-business Republican, has appeal to Liberals on social policies.

However, the Republican Party has demonstrated time and time again that it is bad at seizing opportunities. It won’t be any surprise if wealthy GOP warmongers do all they can to jeopardize Paul’s expected 2016 presidential bid.

When the attack ads against Rand Paul come – and they will come – ironically they won’t come from Democrats, but from big money warmongers in his own party.