During his press conference today, President Obama addressed the violence in Baltimore, claiming his political agenda would help:”

“There’s a bunch of my agenda that would make difference right now in that,” he said, calling for more funding for early education, criminal justice reform and job training.”

How will more funding for early education prevent people from setting local stores on fire? Could this all have been prevented if only preschoolers were taught how to riot in a more agreeable way?

Why would people on welfare want job training? They are already getting paid to do nothing. Maybe they mistook the CVS store for a job training center and smashed the windows so they could be first in line?

Yes, it is needed.

But what is President Obama’s idea of reform? Counseling, smart probation, reinvestment, blah, blah, blah, more of the same shit progressives have been spewing since LBJ. This is the old “our policies may have failed, but if we spend more on them then they will succeed” scam. 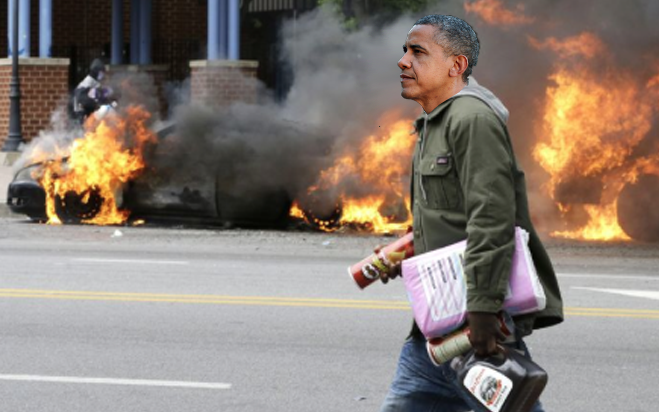 “I’m under no illusion that under this Congress we’re going to get massive investments in urban communities.”

Well, that’s a relief. I mean, would any sane person make a massive investment in a community where it’s likely to be burnt down?

President Obama then explained that Americans should not “just pay attention to these communities when a CVS burns,” but rather work together to tackle poverty around the nation.

You hear that Americans, get out there and start working to tackle poverty around the nation… do it now. What a joke.

First of all, you, that is to say YOU, are not going to do shit to tackle poverty.

You are going to sit there behind your computer screen and act righteous and that’s about it. Maybe you’ll post a slogan on Facebook to show your friends how wonderful you are, and that, is about it.

What President Obama is really saying, is that because you are not going to do shit, you should vote for him and his ilk for the illusion of doing something.

Oh yes, you too can be a hero, you too a warrior for social justice. In your dreams.

But President Obama isn’t finished yet…

“What I’ve tried to do is promote those ideas that would make a difference, but I think we all understand that politics is tough because it’s easy to ignore those problems or to treat them as a law and order issue as opposed to a broader social issue.”

Okay, I’m pretty sure that people smashing car windows, looting stores, and burning down buildings is a “law and order” issue. Maybe on planet Obama people who steal, burn, and riot are victims, but down here on earth they are criminals.

President Obama also suggested that it’s the medias fault, saying, “One burning building will be looped on television over and over and over again and the thousands of demonstrators who did it the right way, I think, have been lost in the discussion.”

If only we could have 24 hour coverage of all the people sitting at home minding there own business then all that icky stuff would just go away.

I’d suggest he just resign and put us all out of our misery, but heaven help us, Joe Biden is an even bigger moron.

610 days till the next election. But who’s counting…