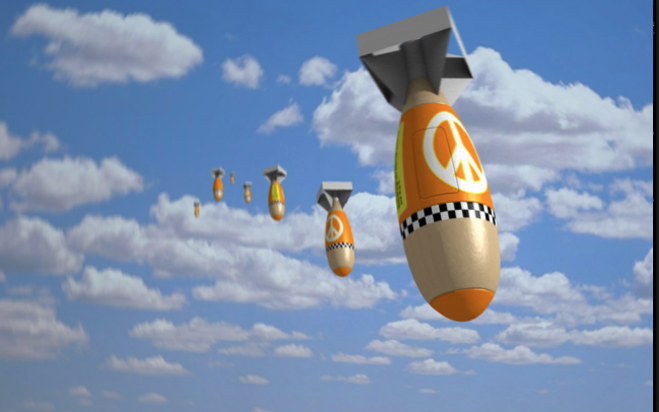 Mencken was right, “For every complex problem there is an answer that is clear, simple, and wrong.”

Perhaps nothing demonstrates this more than U.S. policy in the Middle East. Whether it’s George Bush and the neo-con gang, or the Obama & Hillary show, the insanity of spreading peace with bullets and bombs goes on.

There is plenty of blame to go around, but I’m not here to point fingers, I’m here to point the way out. There is no time machine, no going back to solve yesterday’s problems, we can only begin from where we are.

And where we are is in a delusion. The idea of spreading ‘democracy’ and ‘western secular ideas’ to the region is a fantasy. The majority of the people who live in the region, do NOT want western values. In Egypt, 74% want Sharia law, in Pakistan 84%, Iraq 91%, and Afghanistan 99%. 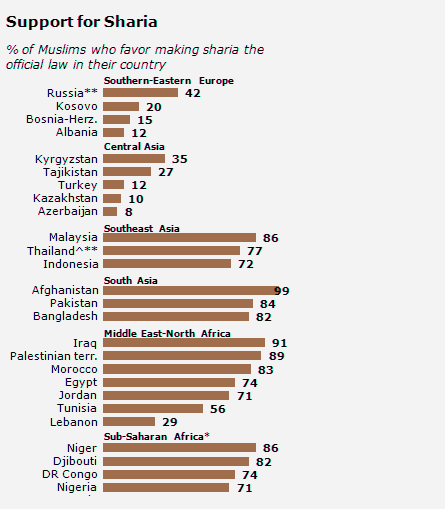 And yet our so-called leaders seriously believe they can transform the place by invasion, remote-control bombing, and fomenting bogus revolutions.

But looking to Western politicians for solutions to complex problems is a fool’s errand. These people are little more than professional narcissists, their primary motivation being the further glory of themselves. The current contenders for the American presidency ought to be proof enough of that. But I digress.

So what is the solution?

The people of the region want Sharia law, so… let them have it.

Stop trying to export Western values and Western governments to a people who simply do not want them. Truly embrace multiculturalism and learn to tolerate Islam doing their own thing their own way.

Personally I think Islam is a backwards ideology and Sharia is an immoral aberration, but… so what?

Why should what I think have anything to do with the way Mr. and Mrs. Abdullah in Bagdad conduct their affairs?

If not me, then why you? or Bush, Obama, Trump or Hillary? Why should Americans fight and die to give Mr. and Mrs. Abdullah something that they don’t want? How is that fighting for “our” freedom? It isn’t.

Now, a complete withdrawal from the region is not going to be sunshine and unicorns that’s for sure. The emergence of ISIS in Iraq is proof enough of that.

And what does ISIS want?

They want an “Islamic State” the same thing the majority of people who live in the region say they want. So why shouldn’t they have it?

Without Western interference and financing, there is very likely to be a period of political unrest and violence, as the powers that be struggle with the peoples they presume to govern. We see this in Syria today.

It is regrettable. A tragedy really, but a necessary one.

What the Western mind cannot seem to accept, is that the Middle East is not a region of nations. Sure, there are lines on the map, and flags for places like Syria, Iraq, Jordan, and Saudi Arabia, but these “nations” are not the creation of the people who live there.

There is no George Washington of Syria, there was no war for independence of Saudi Arabia, and there was no popular referendum to establish Iraq.

The region is an area of tribes, with tribal customs and loyalties. The countries we see on the map are fictions, drawn up randomly by the victors of the first world war. If the people who live there don’t like the lines, and why should they, then the lines can go.

If the people of the region want Sharia law and ISIS, then so be it. That’s up to the people who live there to work out. Not Western politicians, not kind-hearted numbskulls, not arms-dealers, nor oil companies.

The people who live there will have to sort it out for themselves – after all, who else has more right to do so?

As for the many Muslims who have emigrated to the West already, those who embrace the Western tradition of separation of Church and State and are seeking their own prosperity are more than welcome to stay.

And those who prefer Sharia – 51% in America and 66% in Europe – should also be given what they want, in a land where Sharia is the custom, where they can pursue their happiness in whatever way they see fit. They have to go back.

Sometimes breaking up is the best thing to do. To truly embrace multiculturalism, means truly embracing multiple cultures. Accept and release. Live and let live. Love and let go.

“East is East and West is West…”