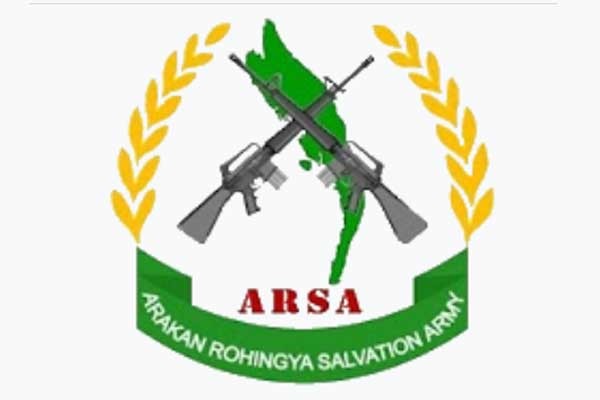 According to CNN and most every other Western news agency, some sort of genocide is taking place in Myanmar against the minority Rohingya Muslims.

The mainstream media story goes something like this: the poor innocent Rohingya were just minding their own business when all of a sudden the army started killing, raping, and burning their villages. Here are some racist monks who approve of the whole thing. Oh and look, here’s a picture of a baby suffering to emotionally manipulate you.

Since I just travelled to Myanmar, I decided to look into it, and… it’s all true. But its also fake. Fake news. Why? Because of what’s left out.

For one, this conflict between ethnic groups in Rakhine province is not new. Not by a long shot. In fact, the word Rakhine means, “one who maintains his own race,” and the area is 96% ethnic Rakhinian Buddhist.

The Rakhinians have been there for 5000 years, and up until the 17th Century they ruled themselves, and liked it that way. Rakhine had a bustling port and the first Rohingya were Arab traders who stayed on in the area.

Rakhine was eventually taken over and ruled by successive foreigners, the Moghuls, the Portugese, the British, and finally by the new country of Burma, now Myanmar.

In the 1950’s there was a movement to re-establish the independence of Rakhine, but it didn’t happen. 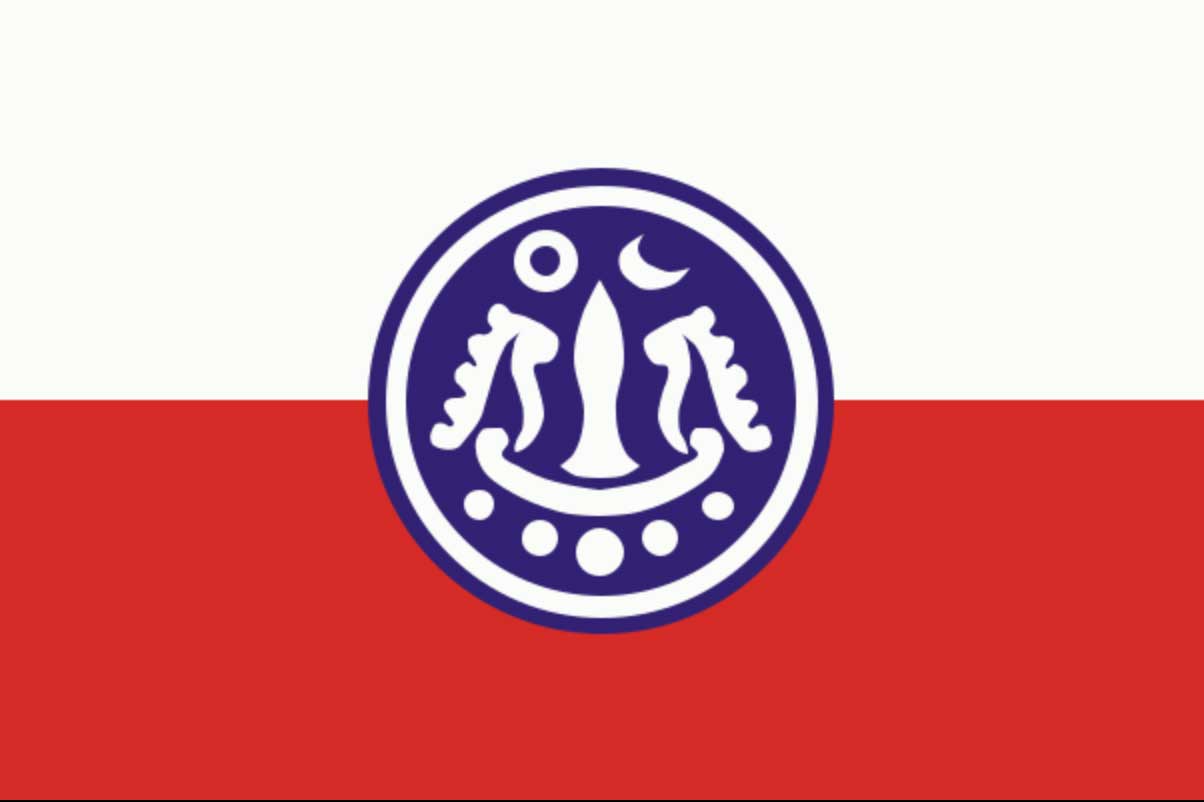 Instead, Burma recognized the Rakhinian ethnic majority, and called it good enough.

But what about the Rohingya?

Why are they being treated so badly? Why are they all over the news and all the outrage? Well, if you think they were just sitting around making donuts when the army decided to burn their villages down, you probably watch too much TV.

It isn’t that the CNN’s and BBC’s of the world are lying – though they may be – but rather the way they pick and choose to craft a story “to their liking.”

Case in point, the CNN version says that the current unrest is due to an unfounded rape accusation made by racist monks. What they don’t mention is that incident was SIX years ago, while more recently (2016 and 2017) Rohingya insurgents blew up a bridge, and looted 24 police posts armed with guns and machetes, and killed several policemen. 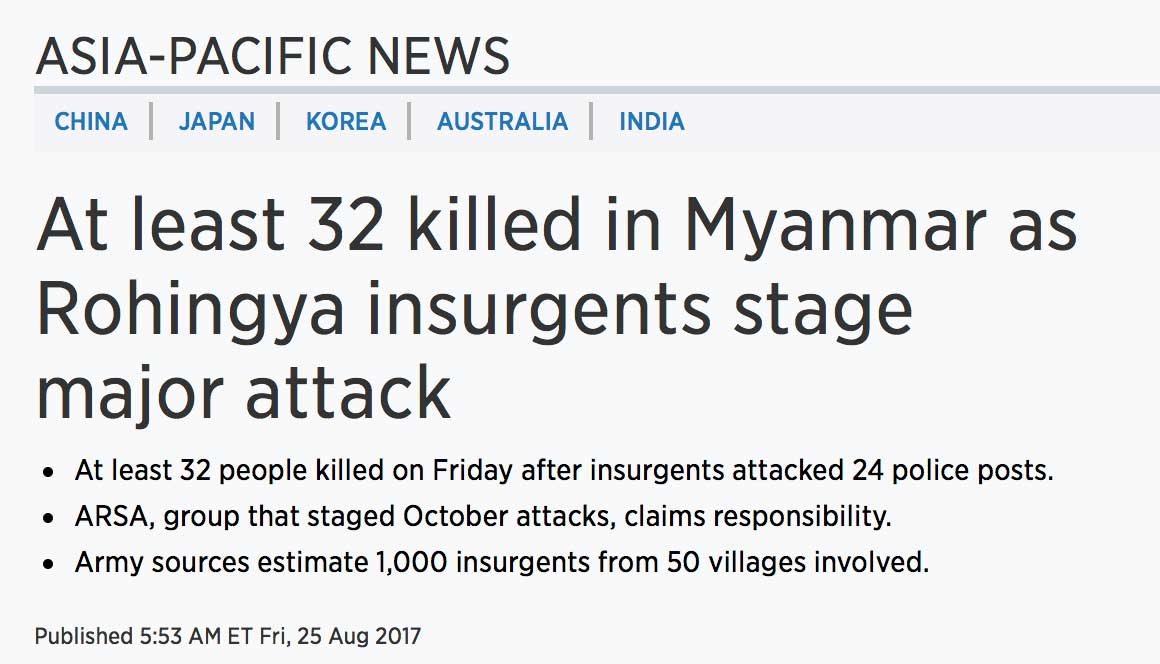 It was reported at the time, promptly forgotten, and left out of any following developments.

Another thing that got left out is who exactly these Rohingya insurgents are. Up until recently they called themselves Harakah al-Yaqin and are led by Ata Ullah, who was born in Pakistan and trained in Saudi Arabia.

Ullah began recruiting Rohingya locals shortly before the attack in 2016, and rumor has it training is provided by Pakistani and Afghan jihadists.

The average Rohingya probably doesn’t have much to do with Ullah and his band of assholes, and to be certain 10’s of thousands are now suffering BECAUSE OF THE BACKLASH TO ATA ULLAH, not because of racist monks, or Myanmar’s supposed desire to carry out genocide.

In what could only be called a PR move, Harakah al-Yaqin changed their name to the Arakan Rohingya Salvation Army (ARSA).

ARSA says they only seek to defend the Rohingyas and their rights, but exactly how attacking police stations and blowing up bridges protects anyone’s rights remains unclear. Perhaps as a next PR move they can remove the machine guns from their logo.

An ARSA press release stated, “We shall not rest until all our desired goals are achieved with the genuine help of the civilised world.” That is to say, their goal is to drag Western powers into the problem that they themselves made. CNN and the BBC are simply ASRA public relations stooges.

So are the Rohingya victims?

Yes, absolutely. Victims of a stupid man from a foreign country with stupid ideas and the backlash against them. You won’t hear that on CNN.

But what is the solution?

Unfortunately, the time for peaceful solutions is long since past. If Rakhine had been granted Independence back in the 1950’s, chances are good this would not have been a problem at all. Even better, if the Rohingya minority was also granted a micro-nation, where they and their culture could be preserved and governed to their liking.

Didn’t happen. Not going to happen.

At this point it might actually be better for the Rohingya refugees to stay in Bangladesh, where the culture is more similar to their own, and start anew. But I am told that many are returning and are “welcome to return” by the Myanmar government.

I assume that efforts are being made to exclude Ata Ullah and his thugs, and let true refugees in. But I expect that effort to fail. This is a conflict of ideologies, it is multi-generational, and it is not going away, at least not peacefully.

There will be more conflict, more violence, and more innocent people will die. Sorry.

But in this terrible situation there is another lesson lurking.

In all the time the Rohingya have been in Myanmar, hundreds of years now, they have not assimilated. They have kept their own language, their own religion, their own law, and now through radical groups they want power as well. And the many peaceful Rohingya are subservient to the radical few.

Three centuries ago the Rakhinians could have told the Rohingya, “Hey, you guys can’t stay here,” and there would be no such problem today.

It would have been hard. There would have been some sad people. But they didn’t do it. They put it off. Perhaps they wanted to prove how nice they were. And now things are much much worse than they need be.

Are you paying attention Europe?