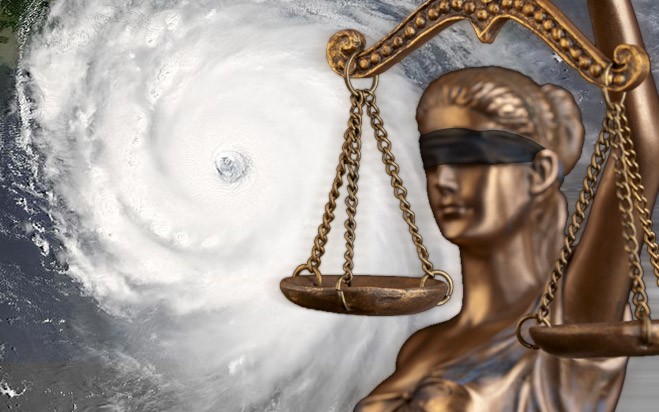 There’s a dangerous storm brewing in Florida. Not in the Atlantic but off the coast of Lake Monroe in the Sanford County Courthouse.

Just up the freeway from DisneyWorld, George Zimmerman is on trial for the murder of Trayvon Martin. The results of this trial are likely to create a storm the likes of which we haven’t seen since Hurricane Rodney King, or Tropical Storm OJ Simpson.

Although it is no DisneyWorld, the trial has turned into a circus. Attendees had to win a lottery to get a seat, and big media has minute-by-minute coverage.

Given that there are 30 firearms related murders every day in the US, it might be worthwhile examining why this one has become a circus, and not others.

Of course, everyone “knows” the reason. This is a trial about race, not about crime.

But this answer is incomplete.

Consider for example that last year there was a trial in St. Louis in which a man was accused of murdering a six-year old child. In his defense he claimed that the child was “racist.”

By any standards that is a pretty outlandish story. Tailor made for media headlines. But you’d never heard of it, have you?

Or consider the case of Nkosi Thandiwe, a young black man who shot three white girls in Atlanta. Why? In his defense he testified, “to enforce beliefs he’d developed about white people as an anthropology major at the University of West Georgia.”

The bullets were just sitting on a shelf, until an anthropology class created hatred that wasn’t there before, and a justification for violence based on race.

A pretty damning assessment of the current state of education, one worthy of reporting perhaps…

But, you’ve never heard of it before, right?

Given these examples, it should become obvious that the Zimmerman trial is not just about race, or just about a crime, it’s about something else.

It’s about creating division, not between ‘right and wrong,’ but between, ‘us and them.’ There are many who benefit from the tactics of division.

It didn’t take Jesse Jackson long to appear on the scene and declare himself judge, witness, and executioner. Despite having no first hand knowledge he said, “Trayvon was shot down in cold blood by a vigilante,” and added, “killing us is big business.”

And then NBC really fanned the flames when they ran an edited version of the police recording. The original recording was as follows:

Zimmerman: “This guy looks like he’s up to no good, or he’s on drugs or something. It’s raining, and he’s just walking around, looking about.”

Dispatcher: “OK, and this guy, is he white, black or Hispanic?”

But when NBC ran the tape it was spliced so Zimmerman said:

“This guy looks like he’s up to no good. He looks black.”

The line between ‘reporting news’ and ‘making shit up,’ had been crossed. But apologies notwithstanding, the court of public opinion had already been decided.

Multitudes of guilt-ridden white people wore hoodies as a symbol of their outrage and innate goodness.

Such divisions being made, are not easily mended.

As this trial approaches its close, it appears as if Zimmerman will be acquitted. This is an outrage to some people and I suppose to many anthropology majors. Some have even pledged to kill Zimmerman or random white people.

That is not a recipe for peace and tranquility.

And what of the facts?

Few care about them. They already have the convictions of their “beliefs.” They don’t ask questions because they already know whatever it is they want to know.

Questions can be inconvenient…

Did Zimmerman do something stupid?
Yes, beyond a reasonable doubt.

Did Zimmerman shoot Trayvon Martin?
Yes, no one denies it.

Did Zimmerman intend to murder Martin because he was black?
There isn’t a shred of hard evidence to support the idea.

Does anyone seriously believe that Zimmerman saw Trayvon Martin and said to himself, “Hey look, there’s a black kid over there, I think I’ll go shoot him.”

Of course there is the burden of history, and that more than anything explains why ‘this case’ and not the other examples have become a media circus. The legacy of slavery has divided society into roughly three parts:

Contrary to the impression given in anthropology and cultural studies departments, no white person now alive has ever owned a slave. Nor has any black person been a slave.

Everyone knows this but somehow it doesn’t stop the illogical blame and guilt for events that occurred more than a 100 years ago. Instead of improving relations they fan the flames.

Does racism still exist today? Yes, of course it does.

But the Zimmerman trial is doing nothing to reduce tensions and mend relations – not as long as it’s presented as a Race Opera. Quite the opposite.

If Zimmerman is acquitted and a new wave of senseless violence erupts in the streets of Orlando, Atlanta, Oakland, or your city, who will be to blame?

Zimmerman? The jury? Plantation owners of the 1800s?

No. None of the above.

If violence erupts, those who fanned the flames of race, along with those who professed solidarity and support based on race, who will be guilty of creating division, and of justifying violence.

Hucksters on TV, opportunistic politicians, and the sympathetic eager to clear themselves of guilt by association, give their blessing to violence – knowingly or unknowingly.

Some will profit from it, while others will just scratch their heads and wonder, “Why can’t we all get along?”

Justice should be blind.

But that doesn’t mean we should be.