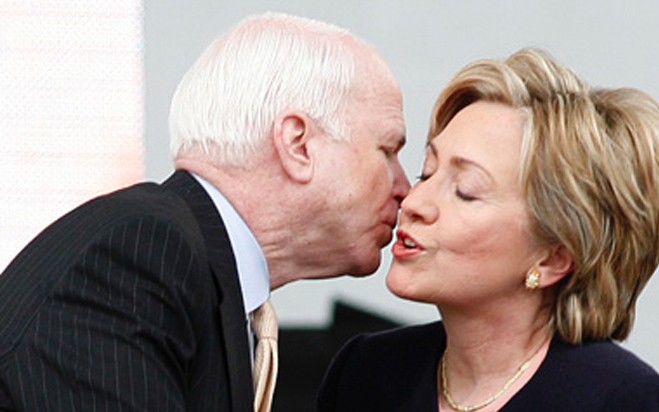 There seems to be a game in Western politics with everyone vying to be the next Churchill, by finding and defeating the next Hitler.

Candidates have included everyone from Fidel Castro, to Moamar Khaddafi, and Kim Jong-un. Curiously absent from that list are successful mass murderers such as Pol Pot, Mao Tse Tung, or Rwanda’s Sindikubwabo.

But what about Putin?

Is he really as big a menace to Ukraine as McCainiac and Sillery seem to think?

Way back in the 1930s, Joseph Stalin imposed a genocidal famine on Ukraine, killing between 2 to 9 million independent farmers.

Walter Duranty won a Pulitzer prize covering up Stalin’s genocide in the New York Times. Franklin Roosevelt then officially recognized Uncle Joe’s U.S.S.R. with nary a protest over the starving peasants in Ukraine.

Decades later, in 1991, George H.W. Bush warned Ukraine that it would not support their independence from Russia if they sought to “replace a far-off tyranny with a local despotism.”

In other words, American Politicians have never given much of a shit over Ukraine.

So when did the matter of whose flag was flying over Crimea or Lugansk become so important that we would risk interference, potentially becoming involved in a war with nuclear-armed Russia?

Every president from FDR through George W. Bush has sought to engage Russian leaders, not in open warfare, but in open negotiation.

This policy has not always been successful, but it has never been catastrophic, with the possible exception of the loss of Eastern Europe and the building of the Berlin Wall.

How then can the seething hatred of U.S. politicians toward Putin be justified?

What has he done to rival the slaughter of millions, or annexing half of Europe, or even sending missiles to Cuba?

In Ukraine, Putin asserted Russia’s hold on the Crimean peninsula where Russia has harbored its navy since George Washington was President. Hardly a reckless land grab.

With the outbreak of open fighting in Ukraine, Putin has parked an army on its border, but there has been no invasion.

Does that look anything like Hitler’s march across Europe into Russia? Or Stalin’s march in the opposite direction?

As for the downing of the Malaysian airliner, Putin did not order that. Why would he? What could possibly be gained from it?

Intel intercepts seem to indicate that Ukrainian rebels thought they had hit an military transport plane.

Yet Sen. McCainiac, calls Obama a coward for not arming the Ukrainians to fight Russian-backed separatists.

Suppose that American arms were sent, and in response Putin occupied the Eastern half of Ukraine.

Neo-con John Bolton says the answer is to bring Ukraine into NATO.

In other words, that the U.S. should be prepared to go to war with Russia over the Crimea, Kharkov, and Donetsk.   Places that McCainiac and Sillery would struggle to find on a map, and places that no former U.S. President has ever considered a vital American interest.

What motivates Putin is simple.

He wants the respect due a world power, and he see’s himself as the protector of Russian interests in neighboring countries.

Rightly or wrongly, his motivations are little different than JFK in Cuba, Reagan in Grenada, or Bill Clinton in Haiti.

Meanwhile Putin helped rid Syria of chemical weapons, allows U.S. flights over Afghanistan, collaborates in the so-called war on terror, and launches our astronauts into space.

Are those the actions of an enemy? of a new Hitler?

He simply disagrees on Crimea and Syria.

And what motivates the Sillerys and McCainiacs of U.S. foreign policy that they would risk reigniting the Cold War by isolating and agitating Russia at every opportunity?

Control of Ukraine’s untapped natural gas reserves cannot be disregarded. But the chest thumping from both Right and Left seems to indicate something more at play.

Is it not just political posturing, attempting to appear strong and resolute, like a new Churchill.

Just who is the real problem?