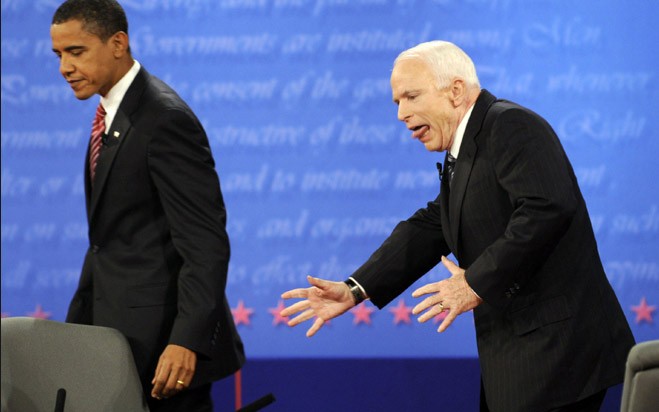 The Obama administration imposed new sanctions on Russia in response to the takeover of Crimea, and threatened more actions.

Both positions are idiotic.

In the case of the sanctions, what was passed were mostly a freezing of U.S. assets of Russian officials. The response from Russia has been mostly laughter.

Russia’s deputy prime minister laughed off the sanctions against him, asking if “some prankster” came up with the list.

In a later tweet addressed to “Comrade @BarackObama,” he asked, “what should do those who have neither accounts nor property abroad? Or U didn’t think about it?”

On finding that he was on the sanctions list, Vladislav Surkov said, “It’s a big honor for me. I don’t have accounts abroad. The only things that interest me in the U.S. are Tupac Shakur, Allen Ginsberg, and Jackson Pollock. I don’t need a visa to access their work. I lose nothing.”

If FOX News was asking “if it was enough” for Comedy Central, then the answer would be yes. But that’s not what they were asking.

The warmongers led by John McCainiac, who never met a country he didn’t want to bomb, wants a military buildup in the Black Sea.

But the unasked question is, “What for?”

The last time I checked the United States was supposed to stand for democracy, and in a recent vote 95% of Crimeans voted to join Russia.

Who the hell is John McCain or Barack Obama to say otherwise?

In response to Obama’s sanctions, several U.S. Senators have been banned from travelling to Russia, including John McCain.

Will the sanction stupidity end now? I doubt it. Not when “honor” is involved.

McCain and the war-mongers will pressure Obama for more sanctions, then Russia will respond “tit for tat.”

The U.S. will freeze Russian assets in the US and then Russia will freeze US assets in Russia. If push comes to shove, Russia could cut off Europe’s natural gas supply, but that’s Europe’s problem not the U.S. so who cares, right?

It’s a matter of honor.