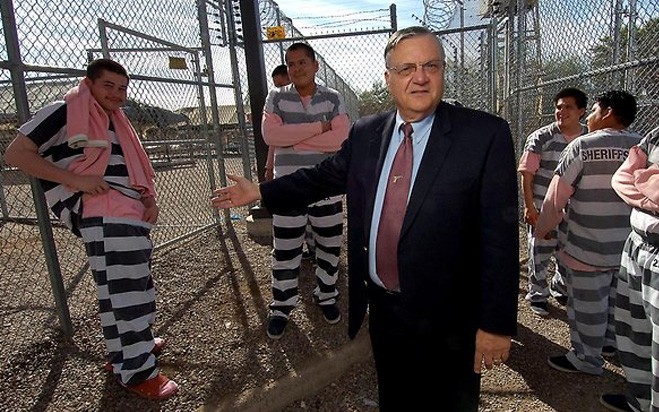 Sheriff Joe Arpaio has some interesting ideas about crime and punishment.

Based on these “radical” viewpoints, Sheriff Joe created a “Tent City” prison in Maricopa County, Arizona, saving taxpayers tens of millions of dollars.

Inmates sleep in tents, smoking is banned, television is a privilege, and everyone has a job. Inmates do work on city and county projects in new age chain gangs.

Sheriff Joe figures that is all the exercise his inmates need and took away their weightlifting equipment. He said,

“They’re in jail to pay a debt to society not to build muscles so they can assault innocent people when they leave.” 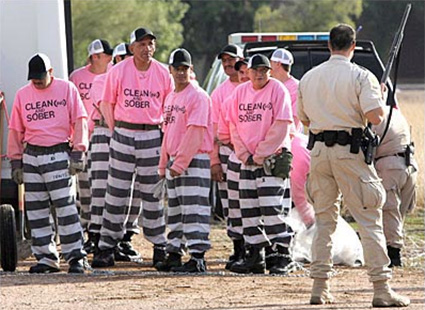 Men in the chain gang work in pink “Clean and Sober” shirts. Their underwear is pink too. Even the most hardened criminals in Tent City now sport pink underwear.

Then he started chain gangs for women so he wouldn’t get sued for discrimination. 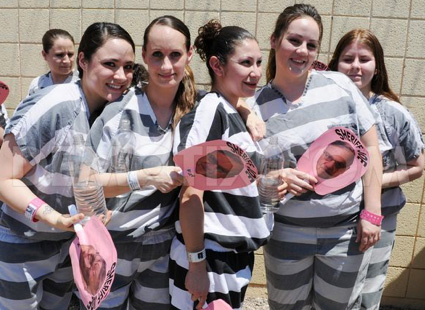 Sheriff Joe has meals down to 20 cents per serving, and prisoners have to pay for them from the money they earn on the chain gang. Sheriff Joe calls this real life training, “If you want to eat, you’ve got to work.”

He cut off coffee because it has no nutritional value and is therefore a waste of taxpayer money. When prisoners complained, he told them,

“This isn’t the Ritz/Carlton. If you don’t like it, don’t come back.”

He took away cable TV until he found out there was a federal court order that required cable TV for jails. So he hooked up the cable TV again but only allows the Disney channel and the weather channel.

When asked why the weather channel, he replied: “So these morons will know how hot it’s gonna be while they are working on my chain gangs.” 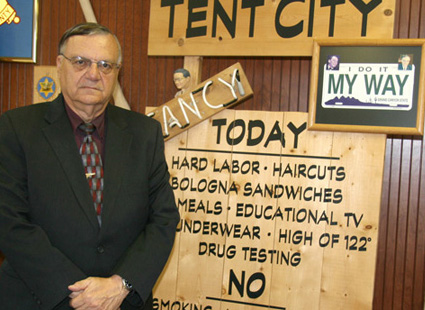 He cut off all but “G” movies, and if inmates want to watch one, they have to pedal a bicycle to power the television set. He also pipes a lecture series on US history by Newt Gingrich into the jail.

When a reporter asked if he had any lecture series by a Democrat, Sheriff Joe replied that a democratic lecture series that tells the truth would be welcome and might even explain why 95% of the inmates were in his jails in the first place.

When temperatures are even hotter than usual in Phoenix, rising to 120 degrees, inmates are given permission to strip down to their government-issued pink boxer shorts.

During one heat wave, when temperatures reached 128 degrees, an inmate for 2 years with 10 more to go said, “This is hell. It feels like we live in a furnace… It’s inhumane.”

But not everyone is pleased by Sheriff Joe’s stern approach to rehabilitation. Community organizers have protested at Tent City to demand he shut down what they call a “concentration camp.”

But Sheriff Joe, is not one bit sympathetic:

“Criminals should be punished for their crimes – not live in luxury until it’s time for parole, only to go out and commit more crimes so they can come back in to live on taxpayers money and enjoy things many taxpayers can’t afford to have for themselves.”

Sheriff Joe told the inmates who were complaining:

“It’s between 120 to 130 degrees in Iraq and our soldiers are living in tents there too, and they have to walk all day in that sun, wearing full battle gear and getting shot at, and THEY have not committed any crimes, so shut your damned mouths!”

Sympathizers for criminals are not the only of Sheriff Joe’s opponents. He has also been accused of harming women.

According to Sherine Conyers of the Cairns Post, by making prisoners wear pink.

“Pink is known as the colour of western women and trying to shame male prisoners by making them wear the most womanly of shades, sends a message that femininity and womanhood are shameful.

If we’re telling the most hardened criminals in society that pink – and what it represents for them – is embarrassing, then what messages are we sending out to women and girls?”

If Miss Conyers had bothered to ask Sheriff Joe, or even to search the Internet for 30 seconds, rather than dreaming up imaginary victims of imaginary problems in her imaginary ivory tower, she would have discovered the real reason why his inmates wear pink.

Far from waging an imaginary “war on women,” Sheriff Joe was just trying to save a few bucks for the taxpayers.

When he discovered that standard issue undergarments were going missing from his jail, he put a stop to it by dyeing everything pink.

After having a good laugh at the moral outrage of people like Miss Conyers, Sheriff Joe even found a way to benefit society by selling replica pink underwear online, with the proceeds going to local causes and charities.

But does the Tent City jail actually do anything to reduce crime?

The answer turns out to be a slightly disappointing: not really.

One study showed that inmates are just as likely to be repeat offenders as other prisons.

This has caused some critics to label Sheriff Joe’s Tent City a failure. But they can only say that by disregarding the fact that Sheriff Joe is getting equal results on a fraction of the budget of mega-jails.

Sheriff Joe says that as long as he is around, Tent City will be too, though critics, convicts, and constructors of mega-jails don’t like it, the voters and taxpayers do.

Sheriff Joe was just re-elected for the fourteenth time.