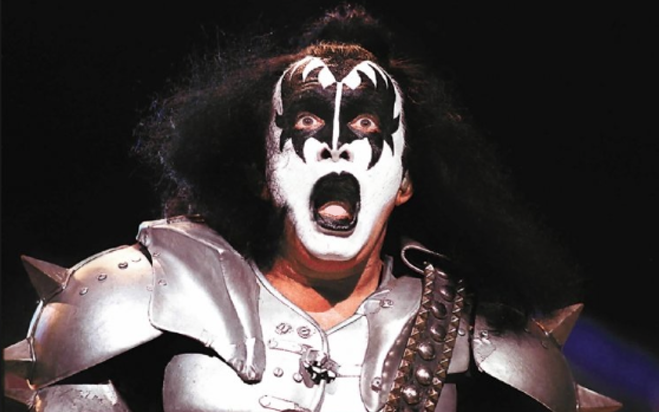 Gene Simmons has a lot to say when he isn’t busy spitting blood and playing bass with his rock band KISS.

As owner of the Arena football team, L.A. KISS, Simmons wanted to hire Tim Tebow, and spoke a little about Tebow’s highly publicized displays of faith.

“I think religion is terrific, religion is good for mankind. Without the Ten Commandments, there’d be chaos.

Here’s some good ideas, don’t steal and don’t kill. Those are good ideas. That’s called ‘civilization.’ Honor thy father and thy mother. That’s a good idea!” 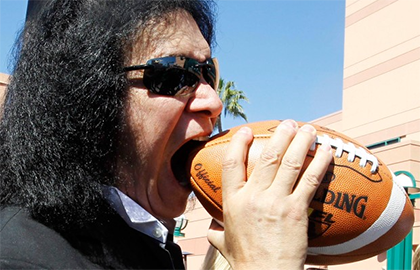 Surprising comments considering that Simmons plays a character known as the Demon in KISS.

When asked if he keeps in touch with the original band members he answers with a resounding, “No.”

Why is that? Simple, “They’re either drug addicts or just downers.”

When Kiss was inducted into the Rock’n’Roll Hall of Fame and Simmons was asked if he’d perform with the original band members, his answer was equally quick:

“No! How many chances in life to do you get? Both of those guys had three chances to be in the band. Three times they fucked it up.” 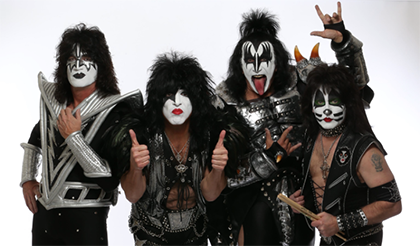 “When you have a cancer in your system, its best to cut it out as fast as you can,” he explains. “It used to be part of your body, it turned into cancer. You gotta cut it out.”

“I don’t get along with anybody who’s a drug addict and has a dark cloud over their head and sees themselves as a victim. Drug addicts and alcoholics are always: ‘The world is a harsh place.’”

“My mother was in a concentration camp in Nazi Germany. I don’t want to hear fuck all about ‘the world as a harsh place.’ She gets up every day, smells the roses and loves life.” 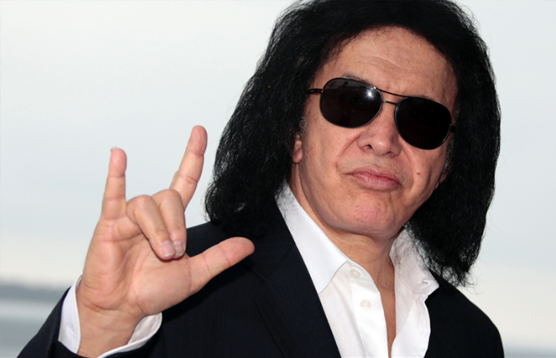 But Gene Simmons has venom to spare for more than just his ex-bandmates. Speaking of today’s disillusioned youth, even suicidal ones he says:

“I never understand, because I always call them on their bluff. I’m the guy who says ‘Jump!’ when there’s a guy on top of a building who says, ‘That’s it, I can’t take it anymore, I’m going to jump.”

“Are you kidding? Why are you announcing it? Shut the fuck up, have some dignity and jump! You’ve got the crowd.”

While Simmons said KISS has new songs ready, there are no plans to record anytime soon. But, there is one artist he’d love to record with in the future: Lady Gaga. 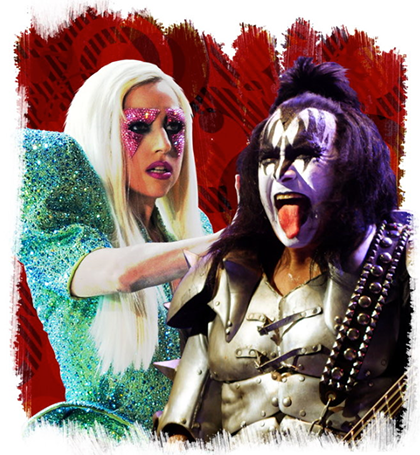 “I think Lady Gaga is the only new rock star, although she’s not a rocker,” he said. “I would like her to throw away all the disco stuff and get a band. Don’t use tapes, come out with a real live band and guitars.

She’s a bona fide musical artist. She did a duet with Tony Bennett, real great pipes. She can sit at a piano all by herself. She’s a legitimate artist. A lot of the other pop divas who are really talented are not artists.”

Simmons said KISS and Gaga tried to collaborate on their last record but both were too busy. “We got close. She got busy, we got busy. We would have done it.”

Born in Israel as Chaim Witz in 1949, Gene Simmons has also had some prominent celebrity relationships, dating Cher and Diana Ross before settling down with former Playboy Playmate Shannon Tweed.

Simmons and Tweed cohabited for more than a quarter century before their marriage in 2011, which was televised, as was their family life, raising two kids on Gene Simmons Family Jewels from 2006 to 2012.

As for kids today, Gene had this advice:

“The only jobs kids have are to do well in school, to be charming and polite, and be thankful. That’s it. I’ll house you, protect you, I’ll even give my life for you, and in return, you will behave.”

Simmons’ mix of charm and smarm has made him a figure to love or hate, in or out of makeup.

He’s been a reality star, with seven seasons of Gene Simmons Family Jewels under his big, studded belt, and continues to tour with the band under the worst of conditions. 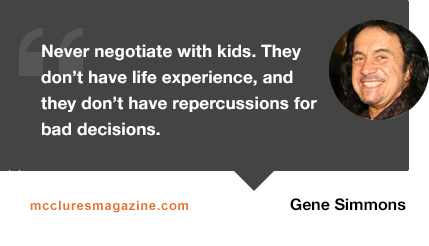