November 7th, 2016
Rabbits and Wolves: The Sexual Evolution of Politics

Among animals, one sexual strategy is adapted for excessive resources, while the other for scarcity.

Mice, fish, sheep, and rabbits for example, enjoy an excess of resources. There is no shortage of plankton or grass for them to eat. Their survival risk comes from predators, so they breed as quickly as possible.

Owls, elephants, dolphins, and wolves on the other hand, must struggle with scarcity. The mice that owls feed on, the fish for dolphins, or the leaves for elephants are not nearly as abundant, nor as easily gotten. For these animals, breeding is limited by the resources available from the environment.

Biologists call these the r/K Selection Strategies, but I will refer to them simply as the Rabbit, and Wolf strategies. There are other behaviors that go along with each:

Wolves compete with other packs of wolves by defending their territory, and also amongst themselves to establish dominance within the pack. Rabbits are averse to competition. There is no risk of running out of grass and so they have no territory to protect. All rabbits are the same.

Wolves are monogamous, pair-bonded, and breed only at a specific time of year. Rabbits breed, well, like rabbits. Often, frequently, and with whatever rabbit happens to hop by.

Wolves, both male and female, instruct and protect their young until they can contribute to the survival of the pack. Baby rabbits are raised by single mothers, who invest the bare minimum of time in them. The sooner they are able to hop away and do their own thing, the better.

Wolves are fiercely loyal to their pack, territory and offspring, defending them against all intruders. Rabbits are loyal only to food, reproduction, and themselves. If a hawk swoops down and kills the next rabbit over, they don’t care, that’s just more grass for them.

So what does any of this have to do with people and politics? Plenty.

For we humans are animals too, and are subject to the same instincts. But being neither rabbit nor wolf, we are rather more flexible.

Although we evolved primarily as a K-selected species (wolves) the rise of more and more easily acquired abundance has led to the increase of “rabbit-people.”

This began in earnest with the industrial revolution (making resources more abundant), and has accelerated rapidly since the advent of the birth-control pill (removing consequences from rabbit behavior). These factors and many others have caused a sort of evolutionary split.

Consider the aspect of competition.

A person who embraces market competition, national defense, and expresses pride in their country – as a wolf embraces competition within the pack and defense against outsiders of the pack – is almost certainly on the political Right.

While a person who believes that there is plenty for everyone, that all people are the same, and is apprehensive towards pack-like exhibitions of nationalism, is almost certainly a person of the political Left. 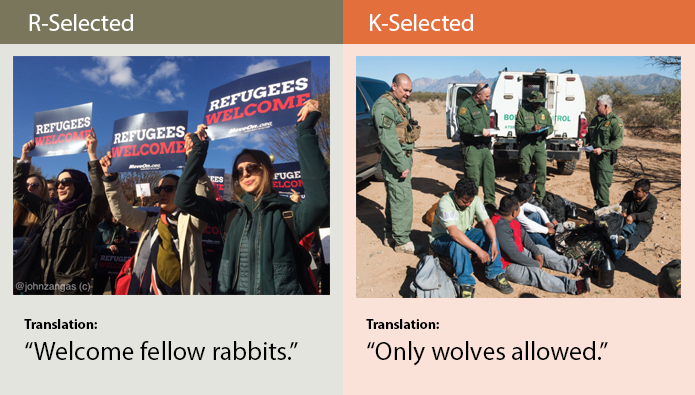 The two-parent family is championed by the Right, while on the Left, single parents are lauded as “heroes.” Stay at home parenting is ideal for the Right, while universal daycare is the preference of the Left. Children’s lives will be defended at all costs on the Right, while the Left wants Abortion on demand.

A flag on the porch, shirt, or bumper sticker is almost always a symbol of the Right. It is a statement of loyalty to the pack. “My pack is the best pack.” People of the Left often find this flag-waving abhorrent. Like rabbits, they believe that all people are the same, that, “All rabbits are equal.”

Rabbits and the Left have a victim mentality. In nature, the rabbit is of course no fan of the wolves, and in political discourse the Left sees nothing but predators around them: Corporations, Wall Street, Patriarchy, etc. and is immediately drawn to the defense of anyone claiming victim status.

Wolves and the Right have an action mentality. In nature, if the wolf wishes to eat, he must catch rabbits. In political discourse the Right sees nothing but opportunity, that those who wish to eat must take action, must contribute to the pack, lest the pack be weakened. The Right is disdainful of low effort.

In politics, both rabbits and wolves respond to language that reinforces their preferences. It matters less what a politician ‘does,’ than how he makes the them ‘feel’ about themselves. Take for example the slogans of the 2016 candidates.

While, “Better Together,” is another way of stating that ‘we are all the same.’ A direct appeal to the rabbit instinct of safety in numbers.

Though it’s perfectly understandable that the Right would be comfortable with an “alpha-wolf,” in a position of leadership, there is simply no parallel of an “alpha-rabbit,” for the Left.

In reality we are neither wolves nor rabbits, we are human beings, gifted with reason and rationality that neither of those species possesses.

But it is not a case of sense and nonsense. It is a case of two different species.

One thought on “Rabbits and Wolves: The Sexual Evolution of Politics”