September 3rd, 2014
Hooray for the Criminals!

Regardless of whether the athletes at Yuma High are upstanding citizens or not, they are still Criminals.

The mascot name is the main attraction when it comes to Yuma (Ariz.). And a lot of the other back stories make this mascot name one of the nation’s best.

So let’s just get right to it. They are the Criminals at Yuma High, located in the southwest corner of the state, just a stone’s throw from both California and Mexico. No other school in the nation is the Criminals.

The origin of the nickname goes back to a time when America had 47 states, and Arizona wasn’t one of them. According to the school’s official website, the first Yuma High School was established in 1909, three years before the Arizona Territory became the 48th state. One year after the school started, it was moved to the Arizona Territorial Prison, and it stayed at that location for three years.

The former prison hospital was where assemblies were held and the cell block was where classes took place. The stay in the former prison was only three years long. But It certainly played a role in the Criminals nickname.

Legend has it that the school’s football team took a trip to Phoenix for a game and the opposition called them Criminals. Why they did that could be because of the prison, or maybe it was because of some cheating on the field. Maybe they stole the game with a last-second score. 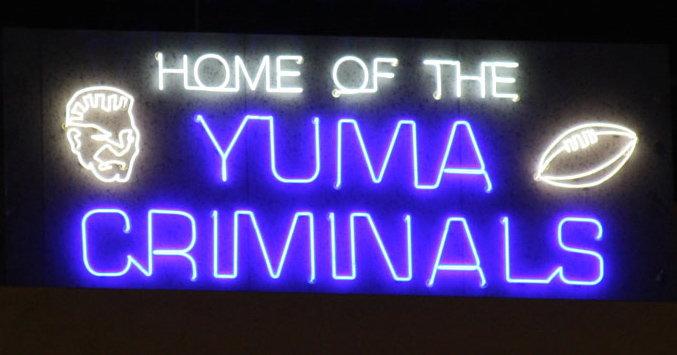 Regardless of the reason why, the school embraced the Criminals mascot name, and now it’s a major source of pride. The school board voted to make the nickname official in 1917. Nowadays, the school’s website states it is the “Proud home of the Criminals.”

Locals also sometimes shorten the mascot name to “Crims,” as you can see in this Yuma Sun article announcing that the mascot name was featured in the book “Strikingly True: A Yearbook of the Weird,” published by Ripley’s Believe It or Not!

Fashion at Yuma High also pays tribute to the mascot name. The wrestling team’s warmups are like prison uniforms, with alternating black and white stripes. And T-shirts online (assuming they are for the basketball teams) use a guard tower to make the Y in Yuma and have a basketball at the end of a chain attached to the Criminals name. 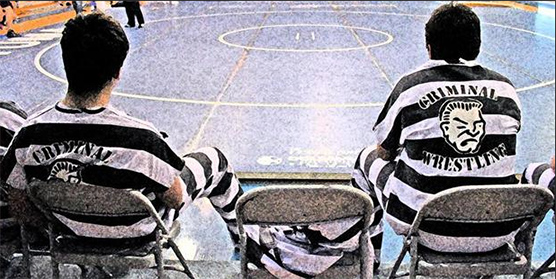 In the grand scheme of things, this is one of America’s most unique mascot names, and it’s all in good fun.

In the 97 years the school has been using the nickname, no actual “criminals” have complained of being offended.