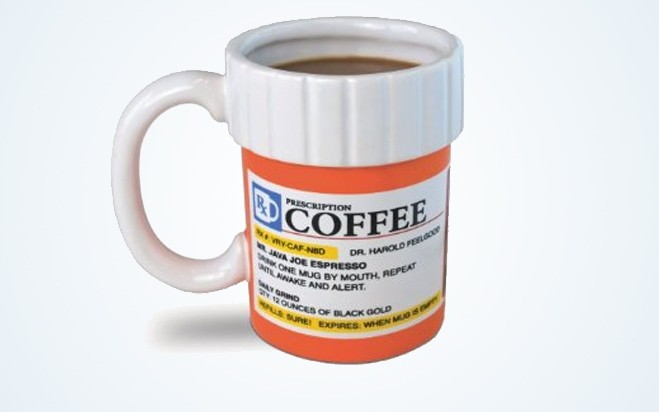 Rest easy citizen, Ohio Attorney General Mike Dewine is here to protect you from the evils of coffee (cups).

Apparently there is not enough crime in Ohio to keep Dewine busy, so instead he has invested his publicly funded salary along with those of 22 other State Attorney Generals to have a coffee cup banned.

Is that the best use of your tax dollars?

The cup in question was designed to look like a prescription medicine bottle. The label instructions read, “Drink one mug by mouth, repeat until awake and alert.”

Any person with an IQ above 80 can recognize the mug for what it is: A Joke.

But not Dewine and his social engineering crusaders, he said, “People die from accidental drug overdoses in this state every day, and these products make light of the problem. We don’t find these products funny at all.”

So has Dewine saved society from a dangerous product, or does he just have no sense of humor?

Perhaps he should consult Alcoholics Anonymous Rule 62: “Don’t take yourself so damn seriously.”

Dewine enlisted the support of the American Association of Poison Control and 57 local poison centers to send a letter to the CEO of the company that produces the cups.

The letter reads as follows:

On behalf of the undersigned Attorneys General, we request that Urban Outfitters immediately cease sales of your “Prescription Line” of glasses, coasters, mugs, drink holders and related products that mimic prescription pill bottles and prescription pads.

As you may be aware, there is a national health crisis related to the abuse and diversion of prescription drugs. As Attorneys General, we have prosecuted and engaged in outreach to stop this epidemic. We are actively engaged in a campaign of environmental change to educate the public that abuse of prescription drugs is not safe simply because the medication originated from a doctor. By putting these highly recognizable labels on your products you are undermining our efforts. These products demean the thousands of deaths that occur each month in the United States from accidental overdoses.

These products are not in any way fun or humorous but make light of this rampant problem. We invite you to pull these products from your shelves and join with us to fight prescription drug abuse.

Did you get that citizen, the attorneys general of 22 states and numerous Federal institutions controlling billions of dollars are busying themselves protecting you from the evils of “glasses, coasters, mugs, and drink holders.”

The company caved in to the pressure, and the busybodies rejoiced.

Now to be sure, drug abuse is a problem, whether prescription or illegal substances. They hurt the abuser, and family and friends as well. And the causes of drug abuse ought to be addressed earnestly and seriously.

But does a prank coffee cup actually have any effect on drug abuse? Could adopting coffee as a ‘drug’ of choice actually lower the temptation to abuse other substances?

The Attorney Generals were not interested in such questions. The conviction of their personal outrage was enough.

“These public officials are going after jokes. That’s no laughing matter. Is there ANY evidence that hipster humor actually costs lives? Do people really see these jokey items as permission to break the law and engage in self-destructive behavior?

If so, maybe the attorneys general also should look into persuading Urban Outfitters to stop selling Che Guevara posters, lest impressionable minds get the idea that Marxist revolution is romantic.”

You know that won’t happen.

Most people probably don’t see a connection between the coffee mug and prescription drug abuse. Indeed no connection has ever been shown.

It is a clear case of the “precautionary principle” gone wrong – combating invisible dragons – just in case.

So rest easy citizen, the war on drugs will soon be won with the wise Attorney Generals on the job, ever vigilant to protect you from mugs, coasters, drink holders and other “drug paraphernalia.”

Without them there would be nothing to protect us from the ravages of the free market.

Your jokes are not funny citizen; please forward them to Big Brother for prior approval lest they go on your permanent record.

Now if we could just get the Gun Coffee Mug

banned, all violence will disappear from the earth. Don’t worry, your tax dollars will get right on it…

A different company has resumed manufacturing the Prescription Coffee Cups. For how long, who knows?

4 thoughts on “The Banned Coffee (Cup)”