Up until a few days ago, I had no idea there was a Duck Dynasty on TV, or anywhere else.

Then some guy with a scraggly beard started showing up in the news in the fiasco of the week.

It seems that Duck Dynasty is so popular that GQ Magazine wanted to interview its star, Phil Robertson, and he stated a few opinions in that interview that didn’t sit well with his employer, A&E.

Robertson expressed the belief that men ought to prefer a woman’s vagina rather than a man’s anus. 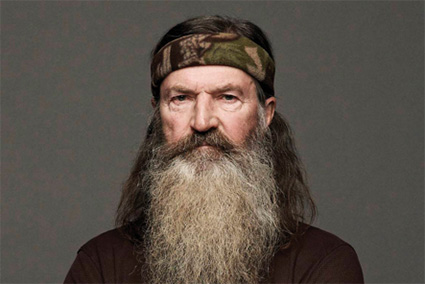 Now this is not a new idea, it’s been around for thousands of years, and as a heterosexual man, I must confess that my preference is in alignment with Mr. Robertson’s.

Should I be punished for saying so?

So what is Phil Robertson being punished for?

According to A&E, they have been strong supporters of gay rights, and Robertson is being suspended for expressing “anti-gay” views.

Robertson didn’t threaten anyone, nor did he profess hatred for anyone, he merely questioned the taste and morality of their sexual preference.

The inclusion of morality, and thus religion, appears to be what got him in trouble.

Taken together, his views might be categorized as “Christian Conservative.” There is no shortage of people who hold similar views, whether Christian, Muslim, Jew, Hindu, or Agnostic.

Yet Robertson’s expression of religious conservatism was so heinous to A&E, that they suspended him even though the remarks were not made on their channel.

I guess A&E can do what they want with their employees, but one thing they can no longer do is claim to be unbiased, neutral, or tolerant of views differing from their own.

Religious conservatism is not tolerated. They can have a show, they can do their redneck activities, sell a bunch of advertising for A&E, but they may not express their views.

Religious conservatives must keep their views to themselves, in the closet, if you will.

How odd it is. Forty years ago, gays were tolerated in society, but were afraid to openly express themselves, for fear that they would be socially outcast.

And though that was seen as a kind of repression, and that no person should be prevented from being who they really are, now there is a new repression.

Social Conservatives are now repressed, fearful to say what they really think, or be socially outcast or reprimanded in their career, just for holding an opinion.

Does anyone doubt that if Robertson were a Muslim, a Jew, or a Hindu, that A&E would not have dared reprimand him?

The former would have made them appear hateful, the second anti-semitic, and the third culturally insensitive.

But isn’t punishing views held by half of their audience also culturally insensitive?

Whether one agrees with Robertson or agrees with A&E, there are a whole range of interesting questions that could be investigated from this difference of opinion.

What is morality exactly? Where does it come from? What role does it play in society? How can opposing moral systems co-exist peacefully?

But such questions cannot be explored, much less answered, without some tolerance of opposing views, some willingness to ask questions, and listen.

Although it’s a virtue they claim with enthusiasm, this sort of tolerance is in short supply among most liberals.

Certainly among those at A&E.

“This is not the mark of a true intellectual life. This is why there is no cultural life now in the U.S. Why nothing is of interest coming from the major media in terms of cultural criticism. Why the graduates of the Ivy League with their A, A+ grades are complete cultural illiterates, is because they are not being educated in any way to give respect to opposing view points.”

They just can’t stand anyone who disagrees with their world view and says so.

The only thing worse is having to discuss those differences of opinion, and so instead of honest disagreement, they swing the ban hammer, relegating their opponents to the closet.

The self-proclaimed champions of the oppressed have become the oppressors, and they do so with much zeal and moral righteousness.

They ought to be ashamed.

2 thoughts on “Ducks in the Closet”