In all the finger-pointing over the so-called government shutdown, whoever ‘points loudest,’ wins.

What do they win?

The minds of the public, in deciding who to blame.

President Obama’s strategy seems to be to maximize people’s pain—and then blame the Republican Party.

Consider that when asked by a reporter if there were a risk of America defaulting on her debt, Obama replied that yes indeed, there is such a risk.

Nevermind that congress is attempting to defund Obamacare, and thus reduce government spending that adds to that debt—why would a President say such a thing unless he were deliberately trying to panic the market?

Or consider the closing of the World War II Memorial.

Made of concrete and marble, it is a place where old soldiers come to honor their buddies who never came home. Many of these aging warriors, travel a great distance to make what may be their last visit.

But the Park Service, acting on orders from the White House, and at ‘additional expense,’ put up steel barriers to keep them from visiting.

What kind of sick mind does something like that?

Not to be denied, the vets pulled aside the barriers, like storming the beaches of Normandy one more time, and proceeded with their visit.

Opposed not by a foreign dictator, but one right here at home.

Now Obama has ordered the cemetery at the real Normandy beach closed. Again, what kind of mindset does such a thing?

Without a doubt, the Republicans have voted to defund Obamacare—three times now. But in each of these votes, they also voted to fund the rest of the government. Welfare, Medicare, Social Security, you name it…

Why, then, is the government shut down?

Because the President has issued an edict: Either Obamacare is fully funded, or we shut down the government, and blame you.

And that’s exactly what is happening.

This is all about a president who insists that his namesake program be implemented to assure himself a paragraph in the history books—even though the majority of Americans, and their representatives do not want it.

This week, Republicans tried to pass legislation that would keep all memorials, monuments, and all programs for America’s veterans open.

Again, Reid and Obama do not want to ease the pain of the people. They want to intensify the pain and do maximum damage to the GOP.

Their strategy is, in a word, sadistic.

But why would such a strategy harm Republicans, if the shutdown is in fact being implemented by Democrats? 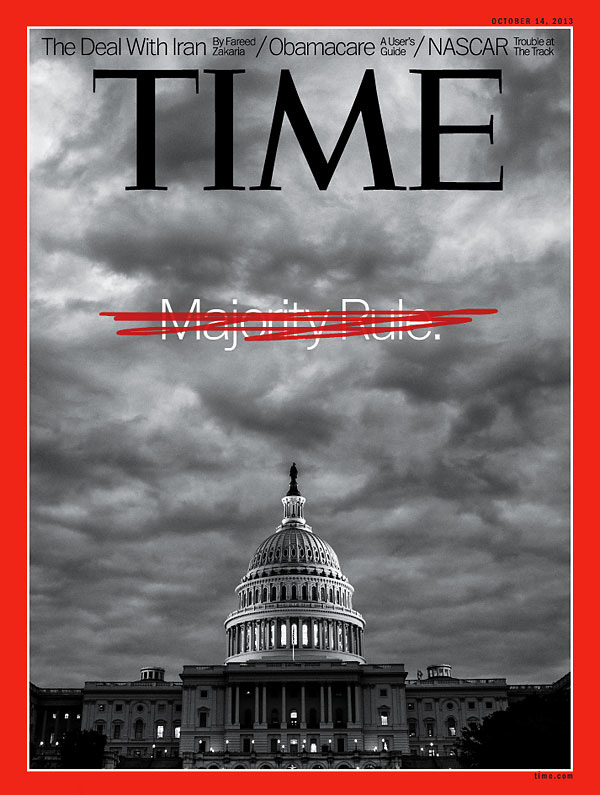 A picture of congress, with the words “Majority Rule” crossed out — the implication being that the majority no longer rules.

The statement is correct, but the image and thus the implication is wrong.

The photo should show the White House, because the majority of congress, and of the American people now oppose Obamacare.

The Time Magazine cover is a complete inversion of reality.

The collaborationist press helps to sustain the Big Lie — that being that it is Republicans who want to keep the government shut down.

Several days ago, the Post complained that Republicans were endangering the nation’s health by failing to fund NIH.

But now that the Republican House has tried to fund NIH in full, where is the editorial denouncing Pelosi or Reid for blocking funding for NIH?

The Post’s real concern was never about funding NIH but about bashing Republicans.

In Thursday’s lead editorial: the Post asked, “At a time of war, how can Republicans justify furloughing much of the intelligence workforce?”

Yet, not a word about the role of Reid and Obama in preventing funding of America’s security agencies.

But if Republicans pass bills funding all agencies having to do with national security — and Harry Reid balks that he is not going to “play this little game.”

Does anyone seriously believe that the Post will hold Reid accountable?

In the blame game, facts don’t matter, whoever has the most fingers to point usually wins.

And yet, more and more people are beginning to distrust the managed press, and the sadistic strategy of Obama and Reid, is showing America that the Tea Party has more than a small point.

With Reid now on the defensive, trying to justify his refusal to cooperate in funding anything, the truth may be gaining on the Big Lie.