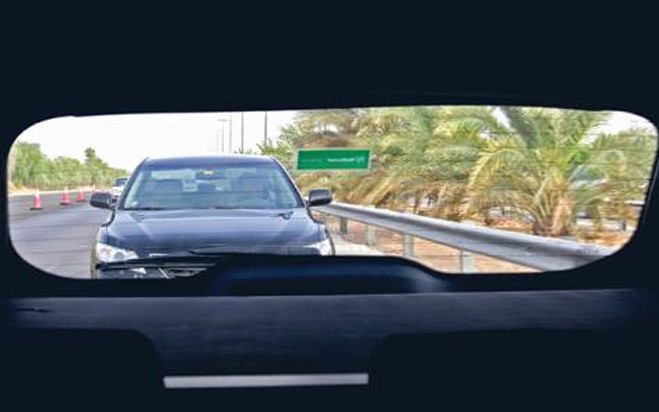 I did it on purpose, and to be quite honest, I don’t really feel bad about it. It would have been perfectly legal too.

It happened where highway 580 to the Bay Bridge splits off onto highway 24 towards Berkeley. Right by the California Highway Patrol. 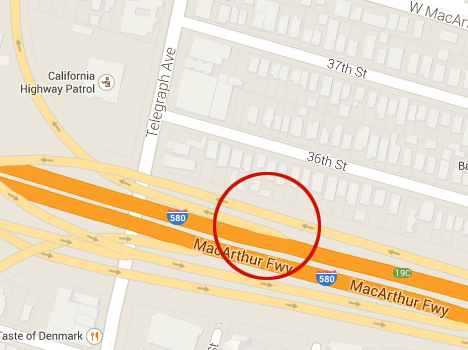 I needed to change lanes to make it onto the 24, but there was a car right next to me so I couldn’t do it. I would have slowed down a bit to get behind him but there was another car right behind me.

And by “right behind me,” I mean I could not see his bumper or even the emblem on the front of the car in my rear view mirror. He was a foot or maybe two feet at the most off my bumper. Tailgater. Big time. 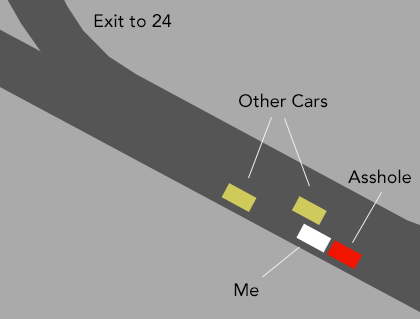 Finally the car beside got in front of me enough so I could tuck in behind him, and I made it just as the dotted line turned solid.

The car that had been tailgating me took off. It was a black Lexus. The guy driving it then tried to cut in between myself and the car I had just tucked in behind. Where I had left it a bit late to change lanes, he had left it insanely late. The concrete divider was approaching fast. 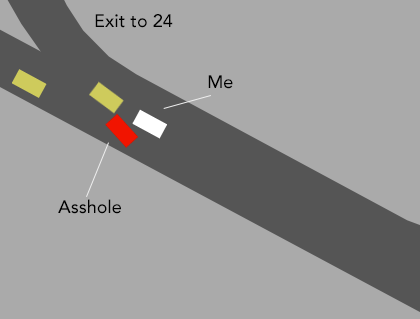 I had two choices:

In the split second I had, I chose number 2. He was then faced with some hard choices:

I would be fair to call this a tense moment. But for me, there was neither rage nor fear in it.

If nothing else, a decade spent racing motorcycles had taught me to be calm under pressure, particularly while moving at high speed. In tense moments the person who panics first loses, and I had been put to the test on this many many times.

The next half-second moved in slow motion as I awaited his decision.

My own safety depended on his choosing the first or third options, so I took a close personal interest in the outcome, and began to plan my next steps.

The concrete divider flew by without an explosion of glass and metal, and I must confess I was a little disappointed. I supposed that he had opted to keep going straight into San Francisco.

But I was wrong.

Somehow he’d managed to slow down enough to change lanes and make the exit behind me, and though somewhat distant in my mirror now, was gaining fast.

Although I was not really phased by almost driving this fellow into a concrete divider, I suspected that he might have rather a different view.

He might even be a tad angry about it.

Given the neighborhood we were passing through (West Oakland), and the demographic profile of the driver. I guessed that the possibility of some sort of violence occurring soon was rather high.

I positioned my car parallel to another in the next lane to prevent the Lexus from getting beside me. Somehow the idea of looking over and seeing a gun pointed at me had very little appeal, but I had to concede it was a possibility.

This was only a temporary fix though, because I was about to get off the highway onto Martin Luther King Boulevard. And so was the Lexus.

What would happen when we had to stop for a red light? What started off as some poor driving decisions could now escalate into who knows what.

I wished that I had a gun.

At the last second, the black Lexus veered off to the right, not taking the MLK exit as I was, but headed the opposite direction. To go that way, he could have changed lanes way back when he was still tailgating me… moron.

Another shitty lane change from a shitty driver but I was glad to be rid of him. Maybe he was concerned about having to stop on MLK near the psycho who was obviously driving my car.

I went about my regular activities, perhaps more perturbed about the fact that I was not perturbed over it. I ought to be angry or scared or upset, but I wasn’t.

Thinking back on it, I had not broken any laws, except perhaps following the other car too closely. But California law does not specify a legal following distance, only that the distance be “reasonable and prudent.”

I consider it prudent to not reward assholes for bad behavior.

But were my actions immoral?

Stupid yes, but was I wrong?

Is it even possible to be stupid and not wrong?