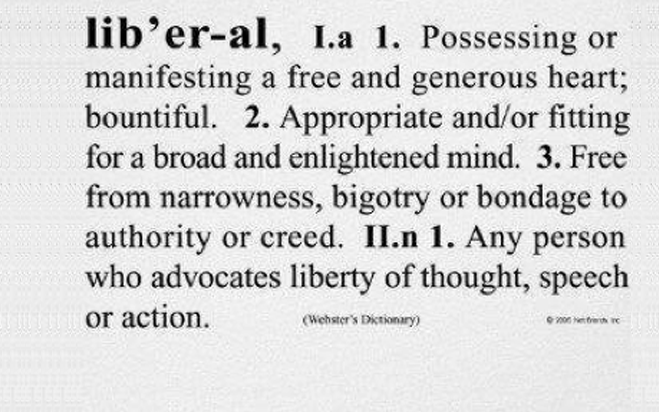 Mirror, mirror, on the wall, who’s the fairest of them all?

In an exercise to polish their own halos, this dictionary definition of “Liberal” is making the rounds on social media. But how closely does the reflection match reality? Not very.

1. Possessing or manifesting a free and generous heart; bountiful.

Oh yes, liberals are very generous with other people’s money. Any program that takes from Person B to give to Person C, they are in favor of it. The liberal solution to everything is “raise taxes.”

How is it ‘generous’ to give away other people’s money?

2. Appropriate and/or fitting for a broad and enlightened mind.

Liberals live in a vast echo chamber, congratulating themselves on how open-minded and broad thinking they are, while at the same time, all thinking the same way. Actually, they don’t think at all. They simply repeat whatever MSNBC, NPR, or the NYT says like a bunch of puppets.

3. Free from narrowness, bigotry or bondage to authority or creed.

Except towards people who disagree with them. From the IRS targeting conservative groups, to uproars over Duck Dynasty, Chick-Fil-A, or Tim Tebow, liberal narrowness and bigotry is on constant display.

And as far as being free from “bondage to authority,” don’t make me laugh. Liberals worship at the feet of their god: ‘government,’ and blindly praise their prophets.

Hillary Clinton could punch babies, burn puppies, and liberals would still vote for her. Or to take that out of fantasyland, President Obama could bomb Libya, force people to give their money to health insurance companies, give guns to Mexican drug cartels and they would still love him.

4. Any person who advocates liberty of thought, speech or action.

Uhhuh. That’s why they all want to ban FOX News and Rush Limbaugh. Liberals are for liberty to agree with them, and nothing else. They live in a bubble of ‘political correctness,’ and cannot stand anyone who live outside the bubble.

And as far as action, oh yes you’re ‘free’ to do whatever you want, except you can’t decide you don’t want health insurance, you can’t plan your own retirement without having hundreds of thousands confiscated from your earnings, you can’t express religious devotion publicly, and you can’t hire someone to do a job without paying tribute to your overlords.

But yes, other than that, you’re free to do as you like.

One thought on “Definition of a Liberal”