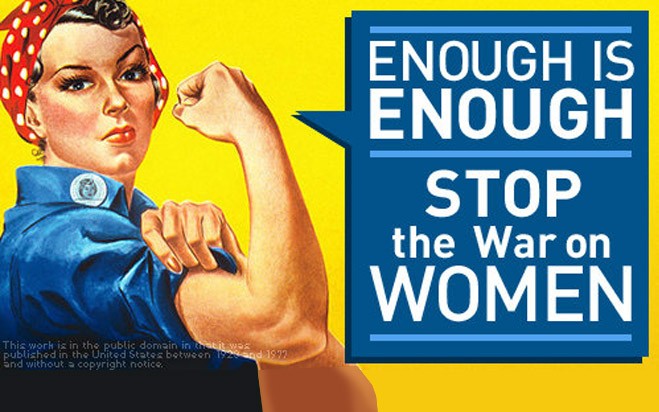 Some ideas are so silly you have to be a sucker – or a college professor – to believe them. Take the “War on Women.”

Democratic Party leaders have recently adopted this slogan as a “proven, persuasive argument,” so you can expect to be hearing it a lot in the run up to the next election. When presumably, the democratic nominee will also be a woman.

It’s considered a proven “argument,” not because it’s proven “true,” but rather because it’s been proven to motivate voters.

But what does it mean?

If Republicans are waging a war on women, does that mean they are waging war on the wives, sisters, daughters, mothers, and grandmothers too?

If so, do the Geneva Convention limits on torture apply, or do they engage in waterboarding and electric shock on their own family members?

I know, I know, the Left doesn’t mean “actual” war. But then why do they say it? Why the propaganda posters? 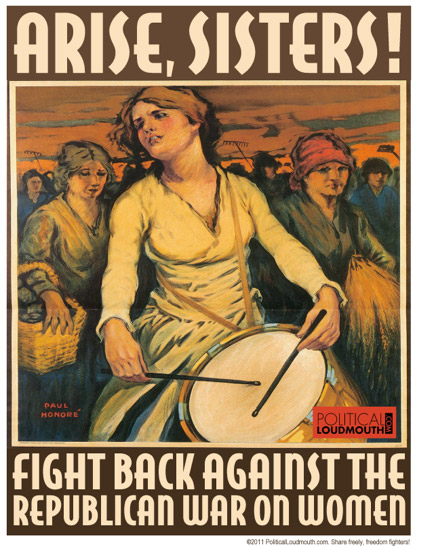 It’s about winning votes. And having a rallying cry that allows people to feel morally superior by standing up for some ‘supposedly’ oppressed group fits the bill.

It’s not about truth. It’s about power.

And people are easily duped. Especially if they’ve been prepared to accept such nonsense for decades.

This idea of a conservative “war on women,” is about as silly as some of the ‘gender studies’ programs found in today’s colleges. The pet theory of the past half-century goes like this: If parents and society were to treat boys and girls identically, then behavior differences would vanish.

Now putting aside the question of why in the hell anyone would want to make boys and girls behave identically, is there any reason to believe this theory is true?

When parents who attempted to raise gender-neutral children. A typical mom said, “We gave them each trucks. She just wouldn’t play with trucks. We wouldn’t let him play with guns, so he pretended carrots were guns.”

And there are many studies documenting how men and women are programmed differently. To this, feminist icon Gloria Steinem sneered, it’s “anti-American, crazy thinking to do this kind of research.”

At the time, fire departments had dropped strength tests to avoid being accused of sex discrimination. When Steinem was told of one woman’s complaint that instead of being carried during a fire, now she would be dragged downstairs, with her head hitting each stair, Steinem retorted, “It’s better to drag them out … there’s less smoke down there.”

More recently, President Obama and supporters brag that Obamacare forces health insurance companies to sell men and women health insurance for the exact same price. Democratic activist Jehmu Greene asked one critic, “Do you want to live in a country where you charge women more than men?”

Well, yes, actually I do. Women go to the doctor far more often than men, even excluding pregnancy related visits, women are still 33 percent more likely to visit a doctor according to the CDC. And insurance should account for costs.

That’s not a war on women, that’s just math.

When it comes to life and auto insurance, women pay less. Why? Because women live longer than men, and despite jokes about women drivers, they get in fewer car accidents.

A 70 year-old woman pays half as much for life insurance as a 70 year old man, yet I hear no one complaining about a war on men. The “victim” propaganda only gets played when women pay more.

Government busybodies demand that colleges have gender equal sports participation, but why not laws requiring an equal number of men in art and dance classes?

Obama even cynically repeats the misleading claim that women make 77 cents for every dollar men make, although his own Department of Labor says the difference evaporates once you control for experience and other choices.

Government once even claimed that Hooters discriminates against men because it hires big-breasted female waiters. The complaint was dropped after Hooters mocked the bureaucrats by running a commercial showing a hairy male server wearing a skimpy uniform.

Social engineers may dream of a society where men and women are exactly equal, but that’s nonsense. Men and women are different. We should celebrate that difference instead of making up fictional wars.

So yes, let’s stop the “War on Women,” stop taking it seriously that is.