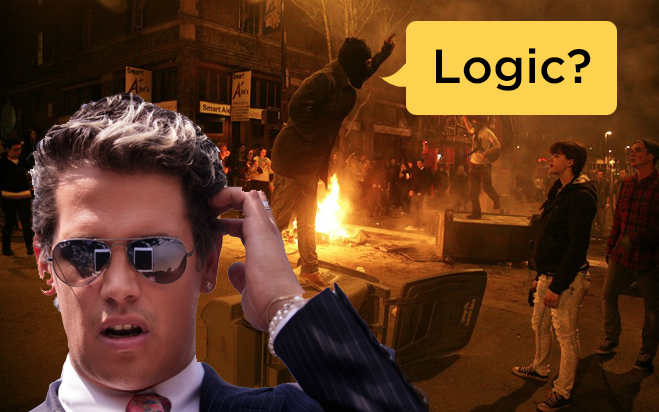 Years ago, my dear friend Laura sighed, then said, “Why can’t people just use logic to resolve their differences?”

What she was really saying was, “Why is the world run by idiots instead of logical people like us?”

My role in the conversation was simply to agree. It was a social cue, an entry point to share her lament for the foolishness of the world, and confirm our moral superiority to it. We were after all, enlightened, educated, progressive liberals, the logical ones.

But I couldn’t help myself. An actual answer had struck me like a thunderbolt. And if we truly were the ‘logical ones,’ then I felt sure she would be equally excited by the revelation. I said…

“Idiots who use force can always impose their will on those who use only logic. Force exists. Therefore it is illogical to rely only on logic.”

She looked at me like she had just seen a ghost. I wasn’t supposed to answer, I wasn’t even supposed to think about it, I was just supposed to agree. Up until that day we had agreed on practically everything. But now we didn’t.

And yet we didn’t exactly disagree.

I had an answer to her question, but she provided no alternative. She only had the question. There was no debate. There was only distance. Over time, that distance increased.

I was embarking on a philosophical transformation, a quest for truth, based not on my assumptions about the world, how wonderful I thought I was, or how stupid I thought others were, but for real answers.

My transformation continues, but suffice it to say, I no longer consider myself to be a liberal progressive – oh, no, very much the opposite.

Although Laura and I live relatively close to each other, we are no longer friends. It’s weird. I think she’s a great person, funny, smart, charming, talented, and full of spirit, we just happen to disagree on a few things.

It’s not a big deal, not to me at least, and some time ago I gave her a call, she answered the phone this way, “Oh it’s you. What do you want?”

I am not a mind reader, but… I got the distinct impression she didn’t really want to speak with me – about anything. We both live in Oakland, with Laura a bit closer to Berkeley than I in location, and much closer in heart. 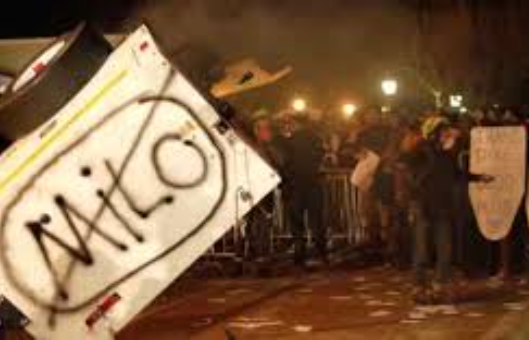 Now in these explanations, the protestors add another answer to Laura’s question from years ago. Why can’t people just use logic to resolve their differences?

In the case of the Berkeley protestors, it is because they cannot use logic at all.

Simply calling someone a name, whether racist, mysoginist, anti-semite, or whatever is not a logical statement – it is a logical fallacy. The Ad Hominem fallacy. To attack the speaker, not what he has spoken. Consider the following:

Question: How many corners does a square have?

Of course it still has four. It will always have four. It doesn’t matter whether Bill says Sally killed her puppy, or Sally flunked the third grade, or Sally has bad breath. A square has four corners. The name-calling is of no significance. It is a shortcut to avoid rational thought. It is not logic, it is just lazy.

And the protestors other claim, that preventing someone else’s free speech is their free speech, is an outright contradiction. Like something out of George Orwell. Double-speak. Oppression is freedom. But they believe it.

Why do they believe it?

They have been “educated,” just not in logic, reason, or anything based on unbiased analysis, but rather in grievance, entitlement, and a false sense of moral superiority.

Because the students cannot use logic, logic must be avoided at all costs.

Although Milo welcomes disagreement and debate at his events, those who disagree with him, or rather, dislike him, have given up on such discussions for a very simple reason: They can’t win. Milo uses reason, evidence, and logic with devastating wit and sarcasm. They don’t.

And so what is left for the person who cannot get what they want with logic alone?

As I explained all those years ago, “Idiots who use force can impose their will on those who use only logic, therefore logic alone is illogical.”

And this is what we have seen at Berkeley. Educated idiots setting fires, smashing barriers, spraying people with pepper spray, knocking over power poles. These are not the actions of logical people, and yet, they got what they wanted.

And isn’t it ironic, the rioters represent the views of “enlightened, educated, progressive liberals,” the views of my dear friend Laura. The violence is now on the other foot and it is little surprise.

For people such as Milo, people such as myself, people attempting to use logic alone to communicate and persuade, at what point do we admit that force is not a tool reserved only for idiots?

At what point does the battle of words become a battle of blood?

One thought on “Berkeley Riot and the Bloody Question”