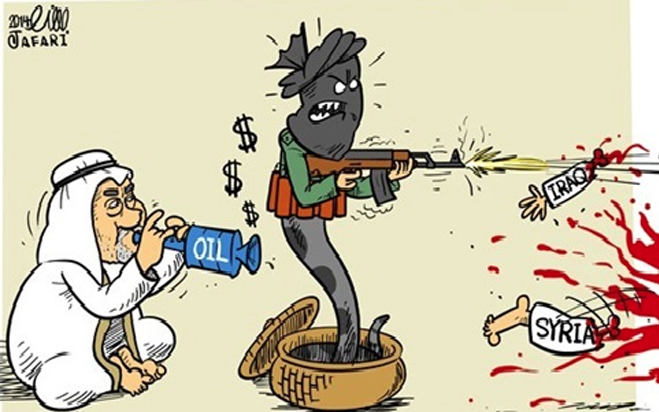 Numerous analysts believe these radical Islamists get much of their money from the illegal sale of oil, Russian President Vladimir Putin shocked many with his claims at the G-20 meeting.

According to Russia Today, Putin said ISIS received funding from more than 40 different countries, including some whose leaders were attending the G-20 meeting.

“I provided examples based on our data on the financing of different Islamic State … units by private individuals. This money, as we have established, comes from 40 countries and, there are some of the G-20 members among them.”

Putin also addressed the need to destroy ISIS’s ability to fund itself through oil sales.

“I’ve shown our colleagues photos taken from space and from aircraft which clearly demonstrate the scale of the illegal trade in oil and petroleum products,” he stated.

“The motorcade of refueling vehicles stretched for dozens of kilometers, so that from a height of 4,000 to 5,000 meters they stretch beyond the horizon.”

One of Putin’s more incredible claims surrounds the invitation he allegedly sent to Washington, D.C., offering to work together to destroy ISIS.

“We need to organize work specifically concentrated on the prevention of terrorist attacks and tackling terrorism on a global scale. We offered to cooperate [with the US] in anti-IS efforts. Unfortunately, our American partners refused.

They just sent a written note and it says: ‘we reject your offer’,” Putin reportedly said.

“But life is always evolving and at a very fast pace, often teaching us lessons. And I think that now the realization that an effective fight [against terror] can only be staged together is coming to everybody.”

While Russia Today is widely considered to be a propaganda machine for the Kremlin, at least in part, Putin’s comments were made publicly and widely reported on.

What remains to be seen is if anything will be done to those individuals and organizations supporting ISIS financially, or to the countries harboring or allowing them to operate.

It’s possible the Obama administration could see this as an opportunity to act via threats of sanctions, as it doesn’t involve any military action and does allow the president a chance to present himself to the world as actually doing something to stop ISIS.