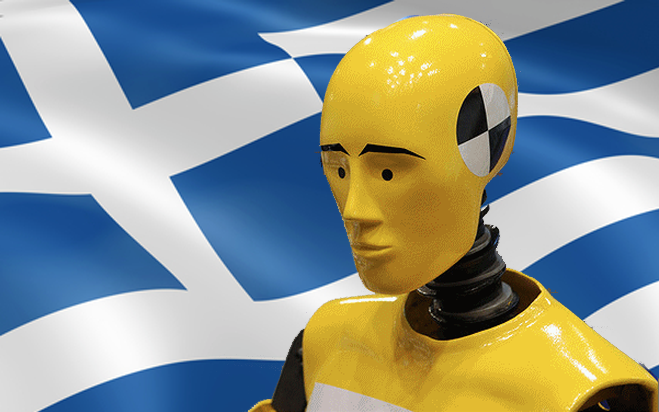 Mr. Greece really likes taking care of his family. Some of his cousins and his older relatives struggle to find work, others don’t like to work, and plenty see themselves as “too old” to work.

So Mr. Greece helps out by sending them some money. [Pensions and Unemployment].

Mr. Greece’s job doesn’t cover all the money he spends on his family, So Mr. Greece got a credit card a long-time ago [National Debt].

Mr. Greece’s friends’ credit cards have much higher balances, and they can make their payments without any troubles. So Mr. Greece figured he could do it too.

But Mr. Greece ignored the obvious: his friends make a lot more money then he does, and their credit card companies think that they’ll continue to make more money. So they get better interest rates [High Debt-to-GDP, High Interest Rates].

When Mr. Greece’s credit card got too high he used a little accounting trick to say that he had more money than he did and he could make those high credit card payments. [Printing Money to Fund Deficits].

Then Mr. Greece saw his friends set up a cool club (Eurozone).

Their club made it easier to do business with each other and that made his friends happy.

Mr. Greece wanted to join the club too. One of the club rules was that members couldn’t do that little accounting trick anymore if they got in trouble with their credit cards. (Ceding Monetary Control to the ECB).

Deep down he knew that he had a problem and he needed to deal with it. Maybe he felt like an alcoholic. “If I join this club,” he thought, “I can change my life for the better. I’ll stop being so irresponsible with my money.”

To get into the club, Greece needed to show the other members that he wouldn’t wreck their party if he joined.

So Mr. Greece showed the club he could be trusted by showing all his financial information, well, maybe not all of it.

The club let Mr. Greece in.

He needed to tighten his belt. He knew that. But his family still counted on him to pay their rent.

The club didn’t allow Greece to spend so much money above his income, but Greece did it anyway.

He felt an obligation to support his family. Maybe–like an alcoholic—Mr. Greece thought: “Tomorrow I’ll change.”

It didn’t bother his club or his credit card companies too much at the time.

When Greece got in trouble he just took out another credit card, and he used those new cards to charge the payments for his old cards [Issuing Debt to Make Debt Payments].

Then Mr. Greece lost his job. He found another, but it only paid about 75% of what his old job paid him. [Economic Downturn].

The Credit card companies got scared.

The credit card companies’ friends lent to other clients and got burned when some of those clients couldn’t make their payments.

They knew Mr. Greece struggled to get by, so they decided not to loan to him any more.

Mr. Greece couldn’t get another credit card to pay his old cards. How would he support his family? And how would he get a better job if he didn’t have money to invest in himself?

Mr. Greece’s club, along with another club, stepped into help.

They didn’t want to see Mr. Greece fail; if he did it might hurt all of them.

Mr. Greece owed some members of this club a LOT of money.

So they lent Mr. Greece the cash he needed to stay afloat. But they told Mr. Greece that he had to pay back the credit card companies first, not give money to his family members. [Conditions on Loans].

Mr. Greece took the money and made payments for another five years. But he didn’t cut his family off like the clubs told him to.

Admittedly, Greece’s family threatens to beat him up if he cuts them off. But still [Greece Doesn’t Meet Terms of Loans].

Mr. Greece’s family was so mad at him, that they decided to put Mrs. Greece in charge. (Elected a Socialist Government).

Mrs. Greece told the family that she would give them free healthcare, big pensions, and pay a living wage to everyone.

Mrs. Greece had a brilliant idea. She told the club that they should lend her more money and she would pay them back never.

The club didn’t think the idea was all that brilliant. They thought it was stupid and told Mrs. Greece “no.”

Mrs. Greece is afraid to tell her family the bad news, that she cannot keep her promises, so instead she is asking the family whether they should accept the club’s conditions or not. (Greek Referendum)

If the family votes no, they will be kicked out of the club, and they will all have to get jobs.

If the family votes yes, then the credit card companies will get some of their money back, but the family will probably still have to get jobs.

Probably cleaning up the damage after rioting in the streets.