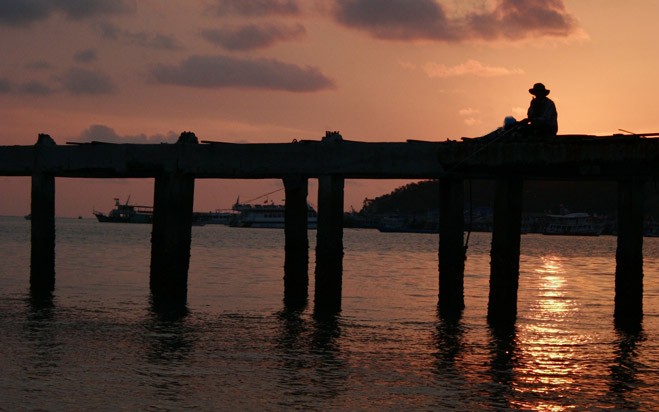 Niels Finsen was 20 years old when the doctors told him that the lumps in his testes were metastatic. After a year of painful treatments, they said that it was hopeless; Niels had only six more months to live.

The doctors were not unkind men, and they told Niels he should go spend those months someplace warm and pleasant. They would continue to sign the forms so that Niels would receive government medical benefits until he died.

Nobody knows how he chose Nai Harn Beach, on the island of Phuket off Thailand’s Western shore, but somehow he arrived there in 1974 with a gaunt two-meter frame, a bald head and a prosthesis made from two ping-pong balls.

Three years later the doctors wrote to say that they could no longer keep signing the forms and if Niels wanted to keep his pension he would have to come back to Denmark and recommence dying.

By then Niels was a shaggy bronzed Adonis, living in a house he had built with his own two hands on land that belonged to a man who would one day be his father-in-law. He spoke fluent Thai, meditated on the beach for an hour each morning and was learning how to drive a long-tail fishing boat.

In those days Nai Harn Beach resembled Gauguin’s Tahiti, and Niels enjoyed the celebrity that came with being the only farang in paradise.

When he received the letter from his doctors he laughed and wrote back, “Tell the government they weren’t paying me enough to die on.”

He left Nai Harn Beach for a few years, to take a job in Pattaya with a Danish tour agency. He led groups of tall, blond, likable Aryans around the Kingdom of Smiles, and when he had a little money he came back to Nai Harn and opened the Malignant Dane for the tourists who were just beginning to discover the beach that had been his refuge from neoplasm.

He married Nid, the daughter of his landlord, who had once, when she was ten years old, been the only child who wasn’t afraid to approach the living skeleton who appeared as if by magic in their village one day.

Niels and Nid discussed adoption for a few years, but eventually Nid filled her house with nephews and nieces and they were happy.

Through the eighties Niels applied himself to business, chopping his hair into a military brush-cut and wearing long pants and shoes with laces. He joined the Lions Club and the Rotary, and at one time there was talk in the village, only half of it in jest, that he would be elected kamnan.

In the end it was his father-in-law who got the job, but only because everybody knew he would consult with Niels on crucial matters.

In 1985 he built the Ugly Duckling Guest House in partnership with another Dane, and they had the usual conflicts that beset any friends who go into business together. But even after he sold his share at a loss, Niels never complained about his ex-pal.

“My bones are full of cancer,” he would say. “Der iss no room for anger.”

By 1990 Niels was representing the Danish embassy on Phuket, helping out tourists who wrecked their rented motorcycles or contracted dengue fever or pushed bargirls over cliffs.

Most of the time he just extended credit in the restaurant to backpackers waiting for the emergency money order from Papa to clear the bank. On average about half of these kids would pay him back.

His skin had long since resumed its normal North Sea pallor, but now he wore his paleness with pride, as all expatriates do. Middle age, low testosterone levels and a sedentary life spent perfecting cream sauce recipes replaced his muscles with comfortably soft flesh, and he grew his hair long again to help hide the bald spot on top.

On his 42nd birthday Niels threw a party at the Malignant Dane for a few good friends. They had a huge, starchy meal and drank Carlsberg beer late into the night.

When his friends left, Niels walked them out to the street; and as they drove off they could still see him, standing in front of his restaurant, looking up and down the brightly lit street with the expression of a man who owns all he sees, and likes it.

The following week one of those friends had pickled herring at the M.D., and it was so bad that he asked the waitress to call Niels so that he could complain. But the waitress just got weepy-eyed and said, “Khun Niels, he die aw’ready.”

The friend learned from the bartender that the morning after his party Niels had suffered stomach pains. The local doctors sent him to Bangkok, and he died within days.

But he had had 22 years of grace, time made more precious by the very fact that it was borrowed, and he always said that it was Nai Harn Beach that caused his remission.

Phuket hosts seven million tourists every year. There are 1.5 million new cases of cancer diagnosed every year in America alone.

Maybe they’re marketing that island to the wrong people.

2 thoughts on “The Malignant Dane”