October 6th, 2014
Would You Like Toilet Water With Your Fries?

Would you rather have ice in your soda, or drink water from a fast food restaurant’s toilet?

12 year old Jasmine Roberts set out to test both the toilet water and the ice from drink dispensers at five fast food restaurants near her home in Tampa, Florida.

She found that the ice from four out of five restaurants ice machines contained more bacteria than water taken from their toilets.

The same was true for three out five drive though windows. Seventy percent of the time, the ice was dirtier than the toilet water.

Sixty percent also tested positive for E. Coli, a potentially deadly bacteria which comes from animal feces. While some bacteria in water is acceptable, no amount of E. Coli is. 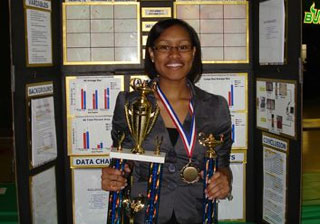 The samples Robert’s collected were tested at the Moffitt Cancer Center under the supervision of a USF professor.

Follow up studies have found similar results at: McDonald’s, Burger King, KFC, and Starbucks. All had higher levels of bacteria in their ice, than samples of water taken from their toilets.

Experts say these results are not surprising because toilets are washed more often than ice machines, which may go months or years without cleaning.

Although none of the samples taken posed an immediate health risk, four of them were high enough to be considered a “hygiene risk.”

Most people’s immune systems are robust enough to resist the pathogen levels found in these studies, but children, the elderly, and anyone with a poorly functioning immune system would be well advised to use caution.

Ice is Just the Icing on the Soda.

Besides the ice, there is really no good reason other than having just crossed a desert on foot to consume soda, from a fast food restaurant or anywhere else.

Regular sodas are full of high fructose corn syrup, and diet sodas rely on aspartame to make them sweet. The first is bad for you, and the second worse.

High fructose corn syrup in soda and sweetened juices are the primary culprits in the rise of obesity, and often contaminated with mercury.

If that isn’t enough, corn syrup is made from genetically modified corn, so if you are anti-GMO, then say goodbye to soda, sweetened juices, and even phony health drinks like Vitamin Water.

A century ago, the average person consumed about 15 grams of fructose a day, usually by eating fresh fruit. Today, a 25 percent of Americans eat a quarter POUND of fructose every day.

According to an American Heart Association study, sugary beverages may be responsible for up to 183,000 deaths every year, including:

What is the Healthiest Beverage?

It should come as no surprise that the healthiest beverage is water. Your body requires a constant supply to fuel the various natural systems nature has designed to keep your body healthy.

Your kidneys, your liver, and your blood all require a constant supply of clean water to cleanse your body from the multiple toxins you’re exposed to everyday.

Ditching sodas and other sweetened drinks is one of the most powerful things you can do to improve your health. In the majority of locations, simple tap water is fine. Certainly better that sweetened drinks.

And you can make your own ice with it.