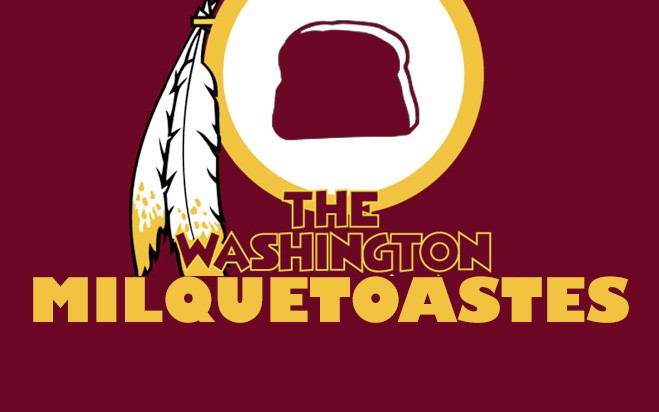 The curious affair of Fred Mudgeon began in 2015 when he, age 67 and largely blind, walked onto the field of the Washington Miquetoasts, the capital’s football team, and announced that he wanted to try out for quarterback.

If ever there was an unlikely prospect for quarterback of an NFL franchise, it was Fred Mudgeon.

However, it was a difficult time for the Toasties, as fans called the team. Formerly the Washington Redskins, they had changed their name under political pressure from those who found the name offensive to Indians.

This did not include the Indians, who were uninterested in the matter. The lefties of Washington were going to protect the Native Peoples from being insulted, even though nobody was insulting them and the Indians themselves had other things on their minds. You can’t be too careful about these matters.

Besides, conservatives supported the demand for a new name, arguing that it was humiliating that a former superpower should name its team after Stone Age savages who had never invented so much as a smartphone.

Macho names, like “the Shrapnel” or the more-descriptive “Washington Felons,” were rejected as being too candid. “The Supermen” would be hurtful to women and the biceps-challenged. Something uniting was desired, something to bring us all together.

It came down to the “Washington Petals” or “the Milquetoasts,” which latter was chosen as being more non-threatening. Republicans objected to “Milquetoasts,” saying the “milque” was French, and wanted to call the team the “Liberty Toasties,” but it didn’t catch on.

The Toasties’ coach, Heftus Packer, took one look at Mudgeon and said, “Giddowdahere. What are you, nuts?”

His lawyers, from the noted K Street firm of Linger, Loyter, Daudle, and Phumble, demanded that the Toasties produce a list of their requirements for quarterback.

It included such things as running speed, reflexes, a good throwing arm, accuracy in passing, and physical toughness.

Actually what Packer said was, “I don’t need some fossilized half-cripple with them thick glasses so he looks like a damn bug.” For this he was charged with a hate crime.

Mudgeon’s lawyer, Priscilla Wang-Waver, said, “Mr. Mudgeon is not unable or disabled. He is just differently abled. To imply that he is of less worth as a person because of purely physical qualities is shockingly insensitive.”

She filed a complaint of ageism, physicalism, and blindism under the Protection of the Incapable legislation, often called the Potty Act. This had passed Congress the year before to prevent massive firings of federal employees.

Ms. Wang-Waver asserted that the Act required the Toasties to make the game more “accessible and friendly” to the differently abled. “Justice doesn’t allow discrimination against people simply because they cannot play football. How many can? On this team there are no gay, women, lesbian, bifurcated, or transaxle players. This is no accident.”

A start toward justice, she said, would be to limit players to a walk and to allow canes on the field. She further thought that physical contact should be disallowed. The game should be more empathic and human instead of competitive, which “leaves some players with low self-esteem.”

From his holding cell, Coach Heftus Packer said, “Caring? Caring? I’ve got a metal detector so these guys don’t take crow bars onto the field. They don’t know from caring.”

The case began to attract national attention. In California, US Senator Barbara Steinboxer-Mowgli opined, “My staff has done some research, and they inform me that football involves violence. This is not a message that we should be sending to our children. We should make football into a cooperative game led by a caring adult. I will introduce legislation to do this.”

Panic ensued in the world of sports. The National Hockey League applied en bloc for Canadian citizenship. The World Wrestling Association asked preemptively for a waiver, saying that pro wrestling was essentially a dance routine.

Worse was to come. Ms. Steinboxer-Mowgli issued a press release, stating “I have just attended a baseball game, and was appalled. I witnessed a huge—ugh!—man violently hitting a ball with a stick. Yes, you may say, it’s just a ball. But in his mind it is a woman. After he hits it, another player picks it up and throws it as hard as he can at the first-base person, who has to protect himself or herself with a sort of glove-thingy. It is worse than dodge ball. And children watch this, and imitate it.”

The legal wrangling went on for several years. It finally reached the Supreme Court as Mudgeon vs Toasties. The Court took jurisdiction under the Commerce Clause, since Mudgeon had been born in West Virginia and and sometimes telephoned his mother in Wheeling, thus engaging in interstate commerce. Two of the justices recused themselves on the grounds that they had Alzheimer’s and couldn’t remember what the case was about. Cynics weren’t sure why it mattered.

In any event, the remaining seven justices ruled that under the Fourteenth Amendment, Mudgeon’s constitutional right to play football had been violated.

The Toasties’ attorney said he couldn’t see what the Amendment had to do with the case. Speaking for the majority, which was all of them, recently-appointed Justice Amantha Molotov-Ribbentrop said, “The Fourteenth Amendment in its majestic sway folds everything into a broad ambit.”

In its concision and clarity, this was held by MSNBC to be “a very model of what the Constitution is for.” The Toasties were ordered to instate Mudgeon as quarterback. All in the legal profession agreed that, post Toasties, nothing would be the same. They were right. The American system had again functioned.

Finally Mudgeon got his chance. He was helped onto the field to face the Denver Mares (they too had been ordered to change their name from the unnecessarily masculinist, violent-sounding Broncos.) On his first play Mudgeon handed off to a walking back who ambled down the field behind the inoffensive linepersons, avoiding discourteous contact. Since the walking back was female, as prescribed gender equity, men could not tackle her thanks to the Violence Against Women Act.

On the Mares’ three-yard line, Mudgeon threw a Hail Mary (or Joseph) pass, which was accounted a touchdown as it wasn’t fair to penalize a largely blind quarterback for his physical infirmities. Than….

I need a drink.