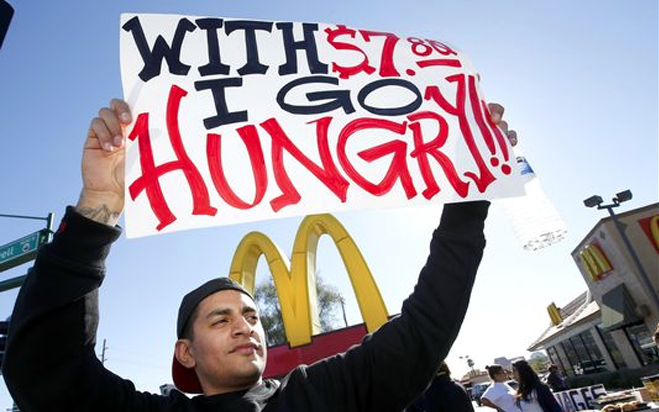 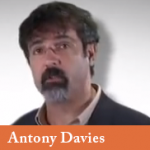 Some politicians argue that raising the minimum wage helps the poor and disadvantaged.

Certainly workers who are earning $8 an hour today would be better off if they were earning $12 tomorrow.

The problem is that a $12 minimum wage doesn’t force employers to pay $12 to every worker.

The employer pays $0 to the workers who get laid off, or who are never hired in the first place.

Suppose Bob owns a burger joint. The reason Bob hires Al to flip burgers is because Al creates value for Bob. Suppose that not counting what Bob pays the kid, he makes 10 cents profits for every burger he sells.

Now, suppose that Bob hires two more workers, Fred who can cook 120 burgers per hour and Carl who only cooks 90.

If the government raises the minimum wage to $9.50, Al and Fred still create value for the owner, but Carl creates a loss of 50 cents.

What should Bob the business owner do?

Bob has a mortgage, a wife, and a couple of kids of his own to support, perhaps even dreams of opening a second location creating even more jobs, but now his profit has been cut from $7 to $2.50 per hour.

The first thing that needs to happen is Carl needs to be fired. His skill level simply does not justify his cost.

The minimum wage was good for Fred and Al, but devastating for Carl. He lost his job and is now getting the true minimum wage: Zero.

What’s even worse is that the more productive workers usually don’t need the help.

Over time, more productive workers get a raise, a promotion, or a new job.

That’s the way it works in the real world.

Increases in the minimum wage have almost zero effect on unemployment among college graduates, a small effect among high-school graduates, and a very large effect among the least educated, least skilled workers.

The minimum wage may be a well-intentioned policy, but it hurts the very workers who are in most need of help.

But what about everyone else?

Just putting Carl out of a job has only raised Bob’s profit up to $3, where it used to be $7.

In order for Bob to maintain his lifestyle, Bob will need to raise the price of a burger.

The higher price of burgers (and everything else) creates less demand, especially from people with low or no incomes – such as Carl who lost his job.

Bob is also less likely to expand his business and create more jobs, just as new businesses are less likely to open. This means even fewer opportunities for newcomers to the workplace, young people, immigrants, and people with low skills.

And all of them have to pay more for a burger.

Meanwhile, Carl is still out of work and has gone on social assistance, draining tax dollars from everyone else.

Though minimum wage laws help a few people in the short term – namely the people who are making exactly the minimum wage and the politicians who polish their halos promoting such laws – the truth is that everyone suffers from them in the long term.

Although large companies have larger payrolls to deal with, they are much less likely to be driven out of business as small time operators like Bob’s Burger Joint.

Alas, politics are a short term game, and good intentions an effective pacifier to long-term thinking.

From a Learn Liberty Video by Prof. Antony Davies