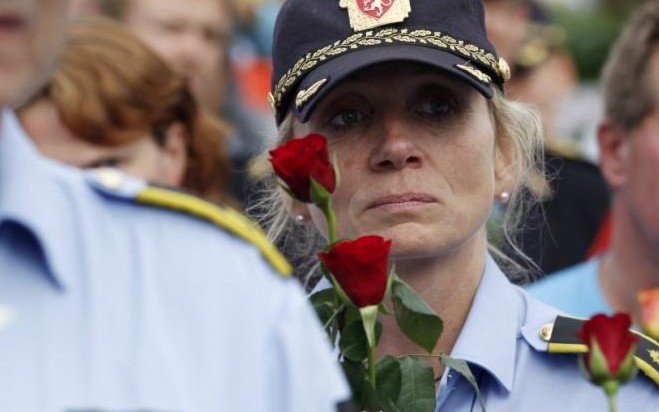 The police are out of control all across the country. They can kick in your door at three a.m., shoot your dog, handcuff your daughters, and you have no recourse.

All of this happens with the explicit help of the federal government. That having been noted, it might be interesting to look at the world as seen by a normal cop from before the budding of the dictatorship.

Let us suppose that you, the reader, are an average white cop in, say, Washington, DC. Let us further agree that you are not swatted-out, do not have ninja fantasies. You are not evil and do not want to hurt anyone.

Evil cops exist, but you are not one of them. You are just a real cop in the real city—not the city as imagined by the humid orchids who write editorials at the New York Times.

How will the world seem to you, a new cop just out of the Academy?

First, you will quickly find that the public doesn’t like you. People do not like being told what to do. Successful people of middle age do not take well to orders from a kid of twenty. They have no choice.

Next, you discover that being a cop affects your social life. People are nervous around you even when you are not in uniform. When and where does your authority stop? They aren’t sure. You probably are not either.

What if someone at a party lights up a joint? Your neighbor parks in front of a fire plug? Your off-duty life comes to consist mostly of other cops. It is more comfortable that way.

Just as the public doesn’t like you, you will not much like the public. Cops do not see humanity at its best. Murder, rape, robbery, arson, domestic disputes, all in a day’s work.

As a real cop on real streets, you learn never to smile. When riding with a reporter, you will joke and tell stories. With the public, you will learn to be wooden-faced and authoritarian. You can’t lose your dominance or you are useless.

After a few months on the streets you will see the baby’s brains on the windshield. You will see the paramedics at the crash scene working hard on the guy who went through the windshield, pumping his chest, trying to intubate him with red gunch pouring from his mouth and no hope at all.

After a few scenes like this, you will learn to turn off. It will cease to bother you because if it didn’t, you would go crazy. And then you will wonder whether there is something wrong with you.

As a reporter, I saw all of these things. Not similar things, but exactly these things. They are not imaginary. They will change your attitude toward humanity. It won’t make you better company.

And nobody but another cop, or someone in the street trades—police, fire, ambulance–will understand. Your wife won’t, and this won’t improve the marriage. Divorce rates are high among cops.

With time, your views on police brutality will become ambivalent. You will see the pretty blonde rape victim, fifteen, about due for her first prom, screaming, sobbing and choking. And you will hear the cop next to you say, “I hope the sonofabitch resists arrest.”

Yeah, you may find yourself thinking, yeah.

Social theories are nice, but the streets are not theoretical.

And you will find that the perps are almost always black. If you are a good liberal, you won’t like this, but after three months on the street you will not have the faintest doubt. If you are a suburban conservative out of Reader’s Digest, you will be surprised at the starkness of the racial delineation.

All cops know this. They know better than to say it. This can be tricky for black cops, especially if former military who believe in law and order.

You will find that there are white cops who knock blacks around and you will think it wrong. But you will decide not to turn them in because you have twenty more years on the streets with them.

You will discover that black cops exist who also mistreat blacks, and this will confuse you.

You will find yourself contributing to bad race relations by enforcing laws you think stupid, pointless and unwise—hassling blacks for drinking a beer on the sidewalk with friends, rolling dice for quarters on the hood of a car, or smoking a joint. Never mind that a black city government made the laws.

Depending on your background when you, the reader, suddenly became a cop, you may or may not have some grasp of how guns work. To begin with you will realize that cops are not very competent with guns.

In an entire career most will never fire their weapons on duty. To be good with a pistol requires hours and hours on the range and thousands of rounds.

You won’t get it.

As a fresh cop, you will notice that the standard editorial notion, that cops are heavily armed brutes amid a helpless unarmed populations, isn’t quite accurate.

When you are on the sidewalks of a bad neighborhood, where you know you are disliked by all and hated by many, you will become aware of your vulnerability. You have to pass close to people. Any of them could blow your head off from behind or stick an ice pick in your back.

Something you will hear often from your new colleagues is: “I’m going home tonight.”

This does not mean, “I’m going home instead of to the bar with buddies.” It means, “If some dirtball threatens my life, or credibly seems to be doing so, I will blow his sorry ass away before I’ll let my wife have to explain to the kids why Daddy is never coming home again.”

Ah, but how do you know when your life is in danger?

Therein lies the rub. In a good department, you will get shoot-no-shoot training. It will surprise you. You stand in front of a very large screen, your weapon holstered.

On the screen appears in video exactly what you would see responding to an armed-robbery call.

A woman, the proprietor’s wife, frantically accosts you. “He robbed us! He has a gun! He went into the alley.”

Gun in hand, you run down the alley, scared and breathing hard. A man with a gun turns the corner, gun in shooting position. You fire.

You just killed the proprietor who also was chasing the perp with his own gun.

Back on the real street. A 250-pound guy crazy on PCP charges you with the clear intention of doing you harm. How much harm? He could kill you.

It isn’t part of your job description to find out. You don’t have time in three seconds to try pepper-spray or send for a Taser, or shout, “Halt in the name of the law, oh evil emissary of the forces of chaos!”

Bang. Maybe he was just going to give you a hug and a kiss.

Or you are in your new cruiser and get a robbery-in-progress call to a Seven-Eleven. The perp—you will call them “perps” by now—runs down an alley and you follow him on foot, gun in hand. At least, if it isn’t in your hand, you are an idiot.

You are panting, pumped up on adrenaline, can’t see well in the dim light of the alley—and the perp turns with something black in his hand.

Cops understand this. Delicate Ivy flowers in the peat moss of the Washington Post do not.

Let’s drop the “You are a cop” narrative. Instead, let’s try an experiment. In your living room, no adrenaline, no darkness, no danger, I will turn my back on you, holding in front of me in one hand a Day-Glo yellow plastic banana and, in the other, a realistic plastic pistol.

You, in calm, perfectly safe circumstances, will point a “pistol” at me. Your finger will do fine. I will turn as fast as I can with one or the other in my hand. You have to shoot or not.

You will find, no matter how many times we try the experiment, that I can turn and fire (if I turn with the gun) before you can decide whether I have a gun or a Day-Glo banana.

Try it in a dark alley.