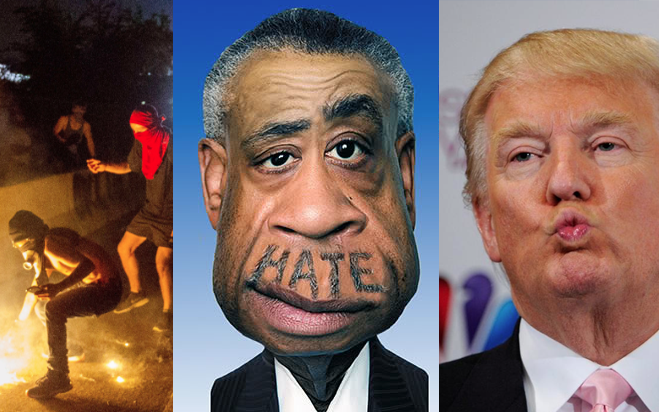 It never stops, and won’t.

Another state of emergency in Ferguson. Headline: “Post-Dispatch Reporter Recovering after Attack while Covering Ferguson.”

He was photographing break-ins.

“The attackers punched him in the face, hit him in the head at least three times and kicked him in the back of the head when he was on the ground, Hampel said.”

This is normal behavior for those doing it. Interesting is that several white men showed up calling themselves Oath Keepers and carrying serious rifles. Depending on which news account you believe, they were there to protect stores or people.

Either way, it looks like another step toward The Big One.

It sets one to pondering the racial disaster that we never call a racial disaster. The usual pattern is that a black man dies or is roughly handled while being arrested. The police may or may not have misbehaved.

The media then assert that “the victim”—not “the criminal”–was a gentle giant, wanted to help people, planned to go to divinity school, and was only inadvertently committing burglary or selling drugs. Later it transpires that he had seventeen felony arrests.

Nothing does. The talking heads and headesses, aflame with indignation, treat any shooting as unprovoked racial murder not requiring investigation and tell “African-Americans” (what a pretentious designation) that they are, as always, victims of discrimination, racism, oppression, structural racism, microaggressions, anything and everything but responsible for their own actions. Such as being burglars or drug dealers.

None of these media delicates will ever have walked a foot beat in a bad section, fired a gun, or imagined what it is like to be in a dark building with a criminal you can’t see and who may be armed. The talking heads seem to have no idea of the intensity of the anger and hatreds in the country.

Notice how puzzled they are by Donald Trump’s popularity. For the price of a cup of coffee in any truck stop on I95, and a little conversation, they could have found out.

A casual glance at headlines around the internet on almost any day might give them a clue to the seriousness of things:

“Farrakhan. We Must Rise UP and Kill Those Who Kill Us. Stalk Them and Kill Them”

“Sandra Bland Protest: All White People Should Be Killed”

Does this sound like a road to a happy ending?

Referring to these headlines will not suggest to the heads that we have a problem. Instead, they will conclude that I am a racist. What could be more useful? (Imagine the uproar if a white said “We must kill all the, er, teens.”)

You might think the proper approach to shootings by the police would be honest investigation of each shooting. No. That isn’t how the game is played. The media lie, doctor audio recordings (NBC was it?) and speak of er, troubled youth. Blacks, intensely tribal, seem uninterested in questions of guilt or innocence. To them, everything is race. Logic, truth, circumstances lack importance.

What with the internet, whites know all of this. As blacks become angrier and angrier because of what they are told is heartless, causeless discrimination, whites get angrier over the endless Knockout Game, hidden by the MSM but not by Drudge. This makes things worse.

Making things worse is the norm for talking heads and the “elites.” Consider Jeff Gutenbezos, daddy of the Kindle and honcho of Amazon. In a display of his essential goodness, he recently pulled from Amazon all items containing the Confederate flag (while continuing to sell Meinkampf). Net effect? To infuriate a lot of white people, largely against blacks, without doing anything to benefit blacks.

Will denizens of the ghetto do better in school with no Confederate flags on sale at Amazon? Will they stop shooting each other? Get married before giving birth? No. But Jeff will feel good about himself. The talking heads will love him.

The other day Bernie Sanders, presidential candidate, aged 73, was speaking when a mob of blacks mounted the stage and shut the event down. Why do they do this? First, hatred. Second, because they know they can get away with it. Parents have forever known that if you let children behave badly, they will  behave worse.

A country deserves what it tolerates. And gets more of it.

All racial policy now is symbolic and without substance—and makes things worse. E.g., I read that black graduate students of education at UCLA have protested because a professor corrected their grammar and spelling. Yes, graduate students who cannot write correct English. I was required to do it in the eighth grade. The professor of course whimpered and groveled like a puppy who has wet the rug, and apologized.

This story raced around the internet to a mixture of laughter, contempt, and horror. Laughter because it is funny, contempt because it is contemptible, and horror because the education students will be teaching our children. Which latter arouses anger.

I assert, in hopes of being successfully contradicted, that given current approaches racial relations can only get worse. If this is not true, tell me why it is not.

What do blacks not fit into American society? First, very poor education. People reading at the level of middle school or below cannot find work in a technological society in which automation is putting literate whites out of work. Second, a culture of hostile dependency brought about by condescending racial policy that requires nothing of them.

And there is no way out. Blacks in Detroit are doing nothing to solve their problems. Black clowns—“leaders,” I meant to say, leaders—like Jesse and Al are not suggesting anything practical, such as studying. They are just milking the victimization cow. The Republicans don’t care and the Democrats keep black votes by nurturing self-pity.

The results? The police in many cities have largely stopped doing anything. If, in a region of armed thugs who hate them, they try to enforce the law, they or a thug will eventually get shot. It doesn’t matter whether the shooting was justified. Either way the cop will be raped in the media. It is therefore common sense for them to avoid contact with criminals.

It has become apparent that the two races cannot live together amicably. The endless efforts to force them to do so only make matters worse. To restore a degree of peace and even of good will, when possible would it not make sense to separate them? At a minimum , get white cops out of black neighborhoods and black out of white? This would instantly remove the racial element in those regions.

Since the races have very different ideas of the purposes of schooling and the manner of effecting it, why force them to mix? For example, why not let universities decide whether to be white, black, or mixed? We could call it something like “freedom of association.”

White universities could require spelling and grammar, set entrance standards as high as they liked, and teach subjects of interest to whites, or some whites, such as European history.

The black universities could decide for themselves what to teach and require. They may have no interest in European history, as blacks have no connection to it. Should this not be their decision?

How to keep aged presidential candidates from being roughed up is another matter. If whites did such a thing, I would say put them in the cooler for six months. To suggest this in the case of blacks would be racism.

Perhaps candidates could speak from a raised platform with retractable stairs and thick glass walls, maybe surrounded by barbed wire. Or maybe on a giant telescreen, with the actual candidate hidden somewhere in a safe house. Have we come to this?