The other day I saw one of those guys wearing his pants under his butt, with said butt covered up only by some paisley boxer shorts. I live in Oakland, so this is not a big shocker, but there were a couple things different about this particular guy.

One, he was about 35 years old.
Two, he had a girlfriend.

I was most amazed by the fact that he had a girlfriend.

Young women after all are the arbiters of what is and is not acceptable. And she was a gorgeous, fashionably dressed, well groomed, professional looking young woman. They made for a very odd couple. The “gangsta” and the “Lawya.”

I couldn’t help but wonder, “Since when has walking around with your ass sticking out become acceptable? Is that how we are all going to dress in a few years? Is ‘low-class’ the new high-class?

Before condemning me as judgmental, does anyone believe that walking around with your ass sticking out is “high-class?”

Whatever one’s views on fashion may be, pants and belts are “tools” designed to work in a certain way to perform a certain task. And an inability or unwillingness to use tools properly can rightfully be considered stupid, uncivilized, or both.

After all, one might attempt to hammer a nail using a screwdriver, but no one would consider that either wise or civilized. It’s a behavior we would expect from our more primitive ancestors than to a modern man.

It’s more than just pants though. Across all spectrums of society we seem to be devolving, moving away from civilization, away from intellectual enlightenment and back towards a new stone age.

In the name of progress and diversity we are moving backwards. In a world where everything is accepted, where there is no good or bad, it is a race to the bottom – in the case of pants, quite literally.

More and more, children are being raised and educated by what they see on television. We should not expect excellence when they are constantly bathed in mangled grammar, bank robberies, people who seem to have no job but complaining, and the glorification of ignorance.

The Roman Empire came to an end when the vandals and barbarians who overtook it, did not care to maintain the progress that Rome had made. Nor did they care to learn.

Without barriers the lowest values of society tend to become universal. Thus we have hanging pants, foul language, facial piercings, and functional illiteracy.

In short, the vulgar have discovered that it is easier to reject higher standards than meet them. By sheer numbers they prevail.

The death of language is part of the larger death of all culture, springing from the same causes: the domination of society by the mob.

Little hope exists of a reversal any time soon, if ever.

In past decades those deficient in schooling wanted to learn. It was seen as a way out, and a way up. Among many today, there is an actual preference for ignorance. It’s cool to be dumb.

Once learning or even the desire for it has been lost, it does not readily return.

The Barbarians are within the gates. Be thankful that they can’t move very quickly, with their pants falling down. 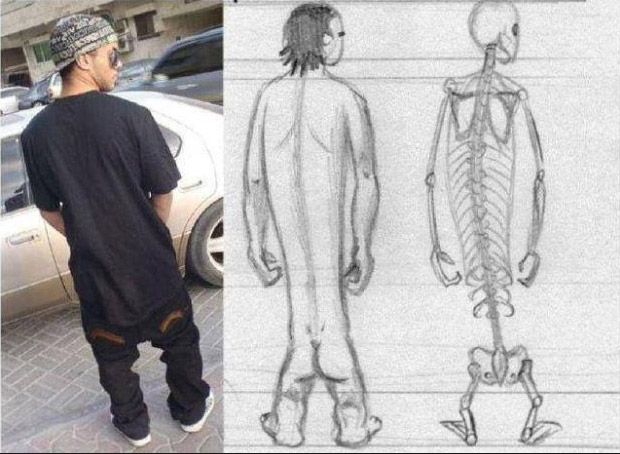