Some years ago I was married to a black woman.

Our relationship was just that, our relationship. It was none of anyone else’s business. But I can tell you with some certainty that being part of an inter-racial couple draws extra attention.

People were curious, surprised, shocked, saddened, jealous, joyous, or disgusted. They looked on from a distance and thought whatever they wanted to think. It wasn’t up to me.

What people want to think was none of my business.

One time a fellow approached us to say how much he approved of our relationship and that we made a great looking couple.

All I could think was, “Buddy, we don’t need your approval, and we don’t need to hear about what a wonderful person you think you are for having it, so get lost you self-righteous douchebag.”

But what I actually said was, “Thanks.”

Like many relationships, we had our ups and downs and at a certain point it became clear that we would go our separate ways.

Part of the problem was the difference in our personalities, I tend to be a more reserved and private person, while she was more a life of the party gal.

As we used to attend numerous parties this difference had ample opportunity to demonstrate itself.

You see, black, white, green, or purple, my wife was a very attractive woman, an excellent dancer, and very popular. Along with her flirtatious nature, this sometimes led to embarrassing situations.

I recall one time when she ran across the room and jumped up onto a popular fellow wrapping her legs around his waist to keep from falling to the floor.

Or were they laughing at me?

Was there any difference?

I wouldn’t bother mentioning this episode if it weren’t for the recent public lynching of LA Clippers owner Donald Sterling.

Sterling, who is 80 years old, has been having some relationship issues with his 30-year-old girlfriend, Vanessa Stiviano. They too, were a mixed race couple. 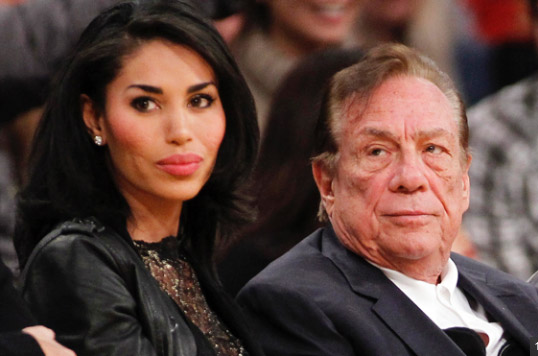 For some reason Ms. Stiviano thought it would be fun to tape-record one of their conversations and then, opps, gosh, golly, somehow that tape recording found its way to the press.

A few questionable comments on that tape, led to the immediate condemnation of Sterling as a racist, and a rabid lynch mob seeking string him up from the nearest tree – or take away his Clippers franchise – whichever is more convenient.

Did anyone stop to actually think?

First of all, why was Stiviano recording this conversation and why was it given to the press if not to create trouble?

But more importantly, what actually happened?

Stiviano had her photo taken with Magic Johnson and posted it on Instagram. One of Sterling’s friends saw the photo and called Sterling up to tell him about it.

Apparently this caused Sterling some embarrassment and he asked Stiviano not to post pictures of herself with “black people” on Instagram. Stiviano then called Sterling – with tape recorder running – and tried to bait him into saying something racist every which way she could think of.

Her: “What’s wrong with black people?”
Him: “Nothing.”

Her: “You want me to have hate towards black people?”
Him: “I don’t want you to have hate.”

Her: “You want me to change my skin color?”
Him: “There’s nothing wrong with your skin.”

Throughout the conversation, she tries to bait him into saying something he’ll regret. But he mostly does not cooperate.

What Sterling does say that gets him in trouble is that in our “culture” there are people who make judgments based on race, particularly where inter-racial couples are involved, and that he would prefer that Stiviano not broadcast her associations.

There are two parts to Sterling’s point of view:

First, the idea that there are people within our culture who look upon mixed-race couples unfavorably.

One would have to be a complete moron or in complete denial to believe that is false. Whether or not one likes it, it is a statement of reality.

In our politically correct society one is not supposed to say so – but Sterling is factually correct – and you know it too.

The second part of Sterling’s statements that got him in trouble was his request that Stiviano not broadcast her relationships with black men.

Now why did he do that?

Well, first of all, this incident was over a photo taken with Magic Johnson, who the last time I checked was a black man.

Though in either of those scenarios, it is unlikely that any of Sterling’s friends would have felt it necessary to call him up and say, “Hey, I saw your girlfriend running around with a midget and a gay man dressed up like a clown.”

Those fictional incidents would not have been embarrassing to Sterling. They would have not called into question the fidelity of his girlfriend, or of his manhood.

All that Sterling is asking for is a little discretion, for Stiviano not to do things that cause him embarrassment or have to explain her behavior to his friends.

Was that too much to ask?

So rapid was the backlash, that the condemnations of Sterling as a racist and calls for his removal were immediate and unrelenting.

Like the townspeople at the end of Frankenstein, or a lynch mob in the old south, a large mass of people who had entirely lost their minds in seeking vengeance.

If Sterling is a racist, it is only in acknowledging that racism exists and conceding that some consideration of that existence should inform – his girlfriend’s – behavior.

How quickly it was forgotten that Sterling pays black players, coaches, and managers millions of dollars to work for his team, that he was to be given an award by the NAACP, and that his own girlfriend was of mixed race.

What kind of racist is that?

And yet all that is erased and forgotten by a few ill chosen comments in a private conversation within a troubled relationship?

In the old days, lynch mobs were against mixing of the races, in modern times they are for the mixing of races.

The times may have changed, but the lynch mobs haven’t.

They’re still self-righteous douchebags, and they still exist for the same reason, to instill fear and enforce conformity.