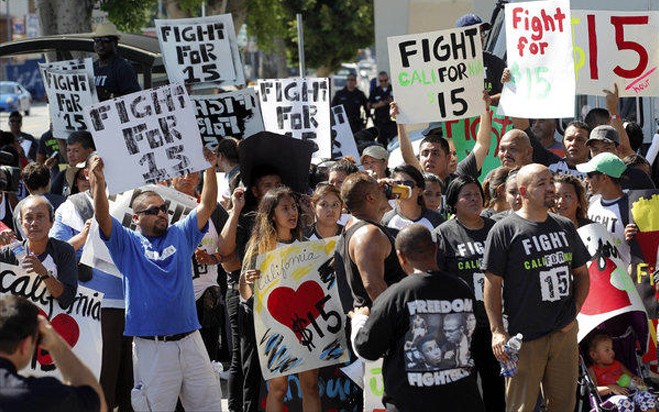 While we talk about democracy and equal rights, we seem increasingly to let both private and government decisions be determined by mob rule.

There is nothing democratic about mob rule. It means that some people’s votes are to be overruled by other people’s disruptions, harassments and threats.

The latest examples are the mobs in the streets in cities across the country, demanding that employers pay a minimum wage of $15 an hour, or else that the government makes them do so by law.

Some of the more gullible observers think the issue is whether what some people are making now is “a living wage.” This misconstrues the whole point of hiring someone to do work. Those who are being hired are paid for the value of the work they do.

As for a “living wage,” the employer is not hiring people in order to acquire dependents and become their meal ticket. He is hiring them for what they produce.

Are some people not able to produce much? Absolutely! I know because I was once one of those people.

After leaving home as a teenager, I discovered that what I could earn would only enable me to rent a furnished room about 6 by 9 feet. Instead of a closet, it had a nail on the back of the door — which was completely adequate for my wardrobe at the time.

It became painfully clear that there was no great demand for a high school dropout with no skills and no experience.

My choices were to get angry at my employer or to acquire some skills and experience — and try to pick up some more education, while I was at it. Even to a teenage dropout, that choice was a no-brainer.

There was no one around to confuse the issue by telling me that I was somehow “entitled” to what other people had produced, whether at the expense of the taxpayers or the employer.

There was a minimum wage law, even back in those days. But it had been passed ten years earlier, and inflation had raised both prices and wages to the point where it was the same as if there were no minimum wage law.

The unemployment rate among black teenagers back then was a fraction of what it would become in later years, after “compassionate” politicians repeatedly raised the minimum wage rate to keep up with inflation.

In 1948, the year I left home, the unemployment rate among black 16-year-olds and 17-year-olds was 9.4 percent, slightly lower than that for white kids the same ages, which was 10.2 percent.

Over the decades since then, we have gotten used to unemployment rates among black teenagers being over 30 percent, 40 percent or in some years even 50 percent. Such is the price of political “compassion.”

Whatever the good intentions behind minimum wage laws, what matters are the actual consequences.

Life was tough when all I could get were low-paying jobs. But it would have been a lot tougher if I couldn’t get any job at all. And a tough life made me go get some skills and knowledge.