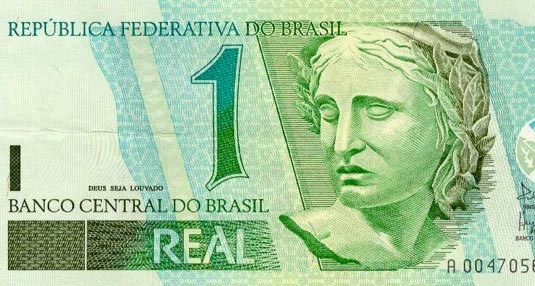 If it weren’t so tragic it would be hilarious. Brazil’s finance minister complained and complained about Brazil’s currency being too strong. In March 2012 he said,

“When the real appreciates, it reduces our competitiveness. Exports are more expensive, imports are cheaper and it creates unfair competition for businesses in Brazil.”

It’s a familiar refrain from Keynsian economists, and Brazil’s Keynsian idiots got what they wanted: a weaker currency.

But now they don’t like how it is turning out. Judging from the protestors in the streets, outraged at the higher prices that the weaker currency has created, no one does.

Almost a million people marched according to police estimates. That’s four times the previous record for the growing movement.

The biggest demonstration was in Rio, which were mostly peaceful, but a group of stone-throwing protesters attacked Rio’s city hall, and were met by police on horseback firing rubber bullets. More than 60 people were injured, including 8 police officers.

Investors are fleeing Brazil too, and the Keynsians in their ivory tower have no idea what to do to stem the outflow of money or the violence in the streets. Two people have died in the protests thus far, which started over increased bus fares of all things.

Brazil’s President Rousseff has been busy making speeches of outrage in an attempt to convince the angry mob that he is on their side. Emergency meetings have been called, and a whole new set of fiascos are likely to follow.

The one lesson central planners never seem to learn is: to leave things alone. 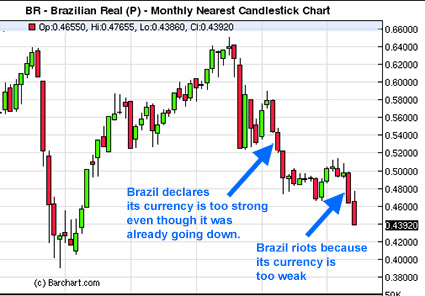 If it were just Brazil, we could point and laugh. But so many countries are involved in this suicidal race to the bottom: Brazil, Switzerland, Japan, China, the US, and every country actually.

China has been accused of being a currency manipulator for years. Japan has turned the money printing presses up to full speed. Europe is in a debt spiral that it thinks it can cure by printing more money out of thin air. And right here in the US, the Federal Reserve is doing everything it can to prop up prices.

Some countries do it right out in the open, like: Japan, Brazil, China, and Switzerland. The rest are sneakier, using interest rate manipulation (holding rates too low) and various “Quantitative Easing” schemes which indirectly weaken their currencies.

Brazil holds the distinction of intervening to both weaken and strengthen its currency within the same year.

They all have the same goal, to make their money worth less and less. In this race to the bottom, eventually all paper money will arrive at its actual value.

It’s easy enough to stop the manipulation, at least in theory: Get rid of the central banks and their bubble-blowing currency debasement policies, end fractional reserve lending, and return to a gold standard.

But Keynsians are not interested in that. Oh no, their god once wrote that gold is a barbarous relic, and thenceforth all have proclaimed it so.

If only Lord Keynes had written that paper is just paper.