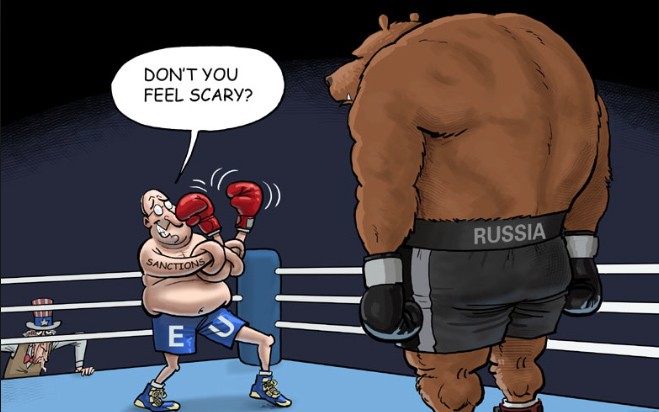 The EU stepped up its sanctions on Russia, aligning itself with the position of president Obama.

The measures were due to go into effect at the start of the week, but several EU countries argued that they needed more time to see whether the new ceasefire would work out.

After the EU announcement, Russia’s representative said: “Russia has no other choice but to go for certain countermeasures.”

Energy supplies are one of Ukraine’s most serious vulnerabilities. It is one of the world’s least efficient energy consumers and its supply crunch is being compounded by falling coal production because of the conflict.

Ukraine needs to import about half of its consumption annually and analysts report it would be hard to weather the winter without imports.

Ukraine complained last month that reverse flows were running at far less than potential capacity; Hungary for example is sending only about 3 mcm, because its priority is to fill its own storage facilities in readiness for a stand-off with Russia.

These EU and US sanctions were supposed to “help” Ukraine, but they have done far more harm than good. Not that egotistical Western leaders would notice.

As a result of previous sanctions, and counter-sanctions fruit is rotting in the fields, businesses are struggling, and more and more jobs are in jeopardy.

Why EU and US economic-jackasses think sanctions will accomplish anything positive or change Russia’s behavior one bit is a mystery.

However, economic-jackasses by definition are going to do stupid things, so we should expect more and more of the same failed tactics.

Invariably, the average citizen ends of paying the price. And that holds true for both sides. The bigger the sanctions, the greater the hardships on those who impose them.

Expect Putin to cave in on account of sanctions? Think again.

Time Magazine explains how sanctions really work: Putin’s Popularity Soars to 87% in the Face of Adversity.

Nonetheless, the EU and President Obama want to “do something”. So they do.

In spite of the fact that sanctions are counterproductive, the “EU has nothing but sanctions to try” so that’s what they do.

Next, mainstream media parrots fall in line. Then under the guise of patriotism, the sheep and ducks fall in line as well.

The sanction approach is similar to fishing for trout with rope and mashed potatoes because that’s all you have to fish with.

Fishing for trout with mashed potatoes and rope only wastes time and potatoes. Sanctions waste more time, a tremendous amount of money, and the bigger the sanctions, the greater the loss of jobs and economic output.