Although I didn’t have a ticket to see Ben Shapiro speak at Berkeley, but I figured events outside the ‘event’ would be just as interesting. I was not disappointed.

Much of the Berkeley campus was closed to traffic and a very large police presence were there to prevent an outbreak like past riots at Berkeley, or worse events, like those at Charlottesville.

Here’s the walk up to the event:

Berkeley is a pretty nice place, and it’s regrettable that such a police presence was thought necessary just for one guy making a speech. A guy who has spoken at Berkeley in the past by the way, with no such security needed.

Why is it needed now?

Listen to one of the protest ringleaders:

That’s the woman who was speaking when I arrived. She was imploring the crowd to stand up against white-supremacy, against homophobia, against neo-Nazis, with women, with trans, and for civil liberties, etc.

That’s all fine and good, but what does any of that have to do with the guy making a speech?

Was this woman not aware that speaker Ben Shapiro, is a Jew? Last time I checked Jews and Nazi White Supremacists were not exactly best buddies. Is this the big problem… Jewish Nazis??? How does that make any sense?

Eventually she started shouting about the evil fascists gathering down the street, rampaging, threatening, lynching, with swastikas and hatred! And she was not shy about justifying the use of violence against them. Sounded pretty scary, so I took a walk down there to see who these super-Nazis were.

See the evil fascists up close:

Okay, the long line of police in riot gear certainly does look a bit fascist, but the people in line to attend Shapiro’s speech looks more like a nerd convention. Yeah a bunch of conservative nerds going to listen to a speech by another conservative nerd. I waited and waited for these so-called fascist Nazis to start rioting, but they just stood there in line doing nothing.

See the core ideology of the protesters on display:

Oh, you think I’m cherry-picking by zooming in on the Communist literature?

Well let’s meet the next speaker, who proudly announces the forthcoming arrival of a Communist revolutionary who will set the record straight on free speech at Berkeley.

Well, hooray for free-speech! After all who knows more about free-speech than Communists? I guess Stalin, Mao, Castro, and Pol Pot weren’t available, but fear not comrades of Berkeley, Bob Avakian will be here soon to explain the joys of the coming Socialist Republic of America!

This next guy was sort of heckling the speakers, not that anyone could hear him above the bullhorn, so I asked him for his take. He was actually quite brilliant, and regretfully I failed to video the second interview I did with him away from the noise.

Now here was a another interesting person… a pro-speech cross-dressing transsexual who opposes Antifa! 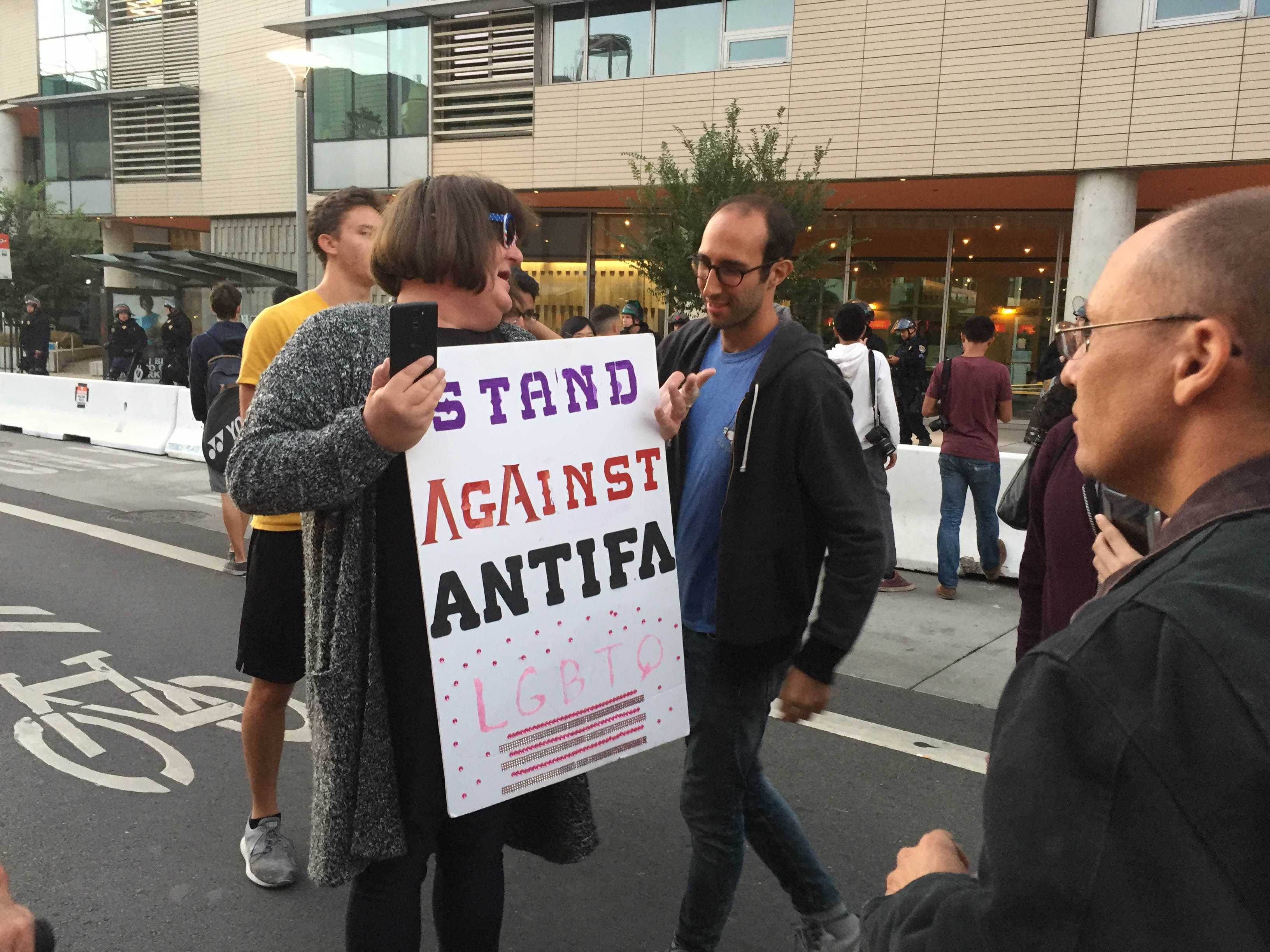 I did speak to her/him/whatever and am sorry to say my iPhone recording skills are not what they should be. Basically she was in favor of free-speech, including that of Shapiros.

Now, remember that lady at the start who was imploring the crowd to stand with “trans?” Well… what about this tranny?

Does the mob not support this cross-dressers right to support the Right? Nope.

According to the this tranny she/he/whatever has been threatened with violence by the people protesting Trump! And there is the trick.

The protest leaders who profess to be on the side of trans/women/minorities/etc, are full of crap.

If not, they couldn’t give a shit. They sow division to further their own cause, and as you’ve seen their cause is Communism.

Oh there I go with the Communism thing again, you think I’m overblowing it? I’m not. I would have never guessed it was this overt had I not been there. 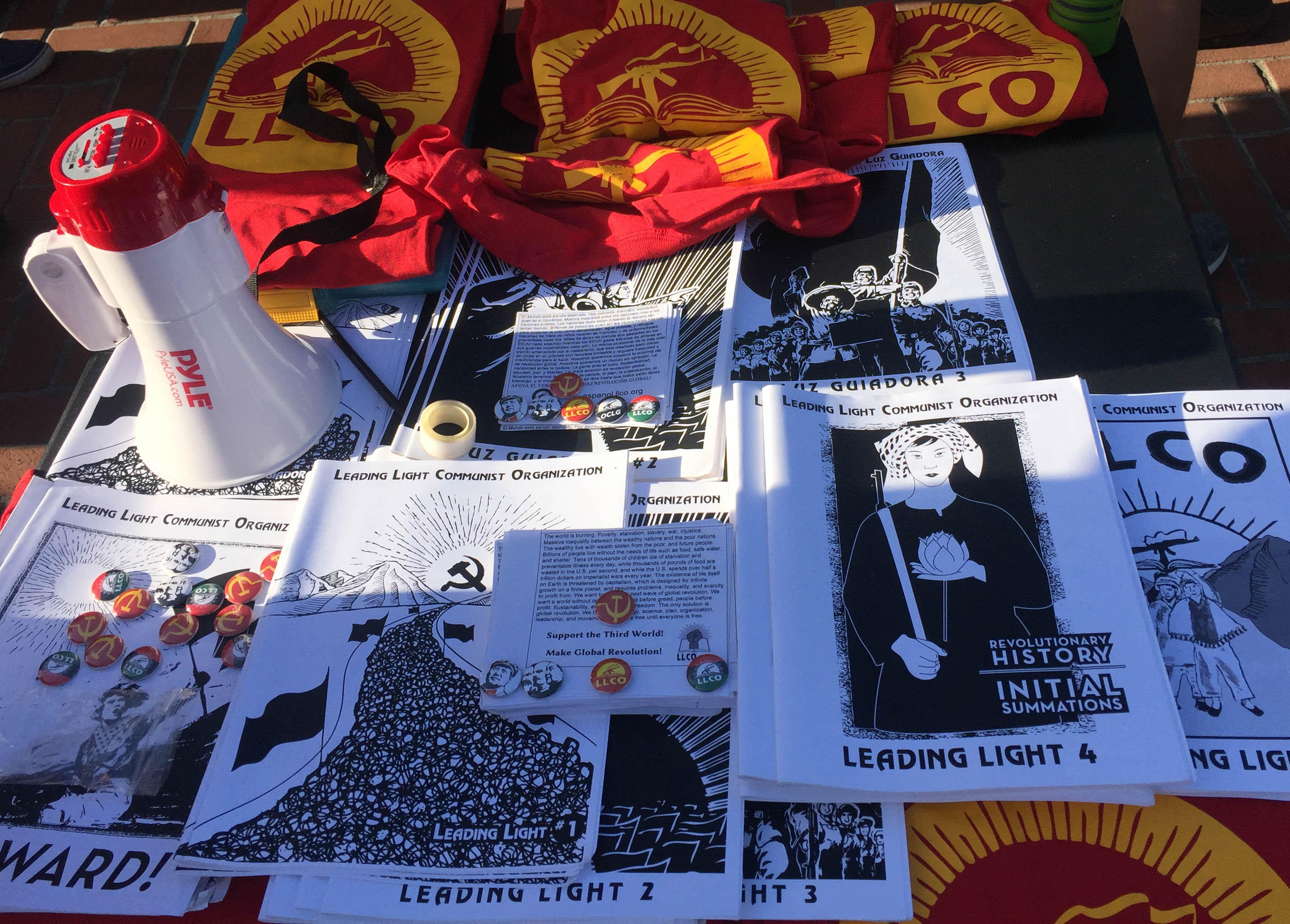 Right at the center of the protest area was this little display for the “Leading Light Communist Organization.” I asked the guy there if I could take one of his brochures. He said only if I made a donation.

“No, no, we don’t sell anything we’re communists.”

Once I stopped laughing I asked, “What’s the donation for?”

“It goes to our bases in the Third World.”

Yeah right. That guy was full of shit, but I gave him two bucks – which he put in his pocket – just so I could enlighten myself.

Here’s an excerpt, “Some ideologies are spoons. Some are knives. Some are guns. Lin Biao called Mao’s theories a ‘spiritual atomic bomb.’ The new breakthrough of Leading Light Communism is the hydrogen bomb of ideologies…”

Well there you have it ladies and gentlemen, faced with such a compelling argument I have decided to convert to communism – viva la revolution!

Just from my walking up and down the street, you can get a pretty good idea of what is going on. But what about the mainstream media?

Media Stooges hard at not work.

Are they reporting on the Communist rally up the street? Noooo…
Are they interviewing people attending the event? Noooo…

But don’t worry about what is actually happening, the media already knows the story they want to tell. Tune in and they’ll tell you what to think. Reality optional.

This guy looked like a lunatic, but turned out to be pretty sane. He didn’t really know what was going on and had just wandered in because he saw the helicopters overhead.

What about Antifa? Where were they? Nowhere to be seen, although the police did detain this guy for wearing a hoodie, bandana, and sunglasses in an obvious case of racial profiling… 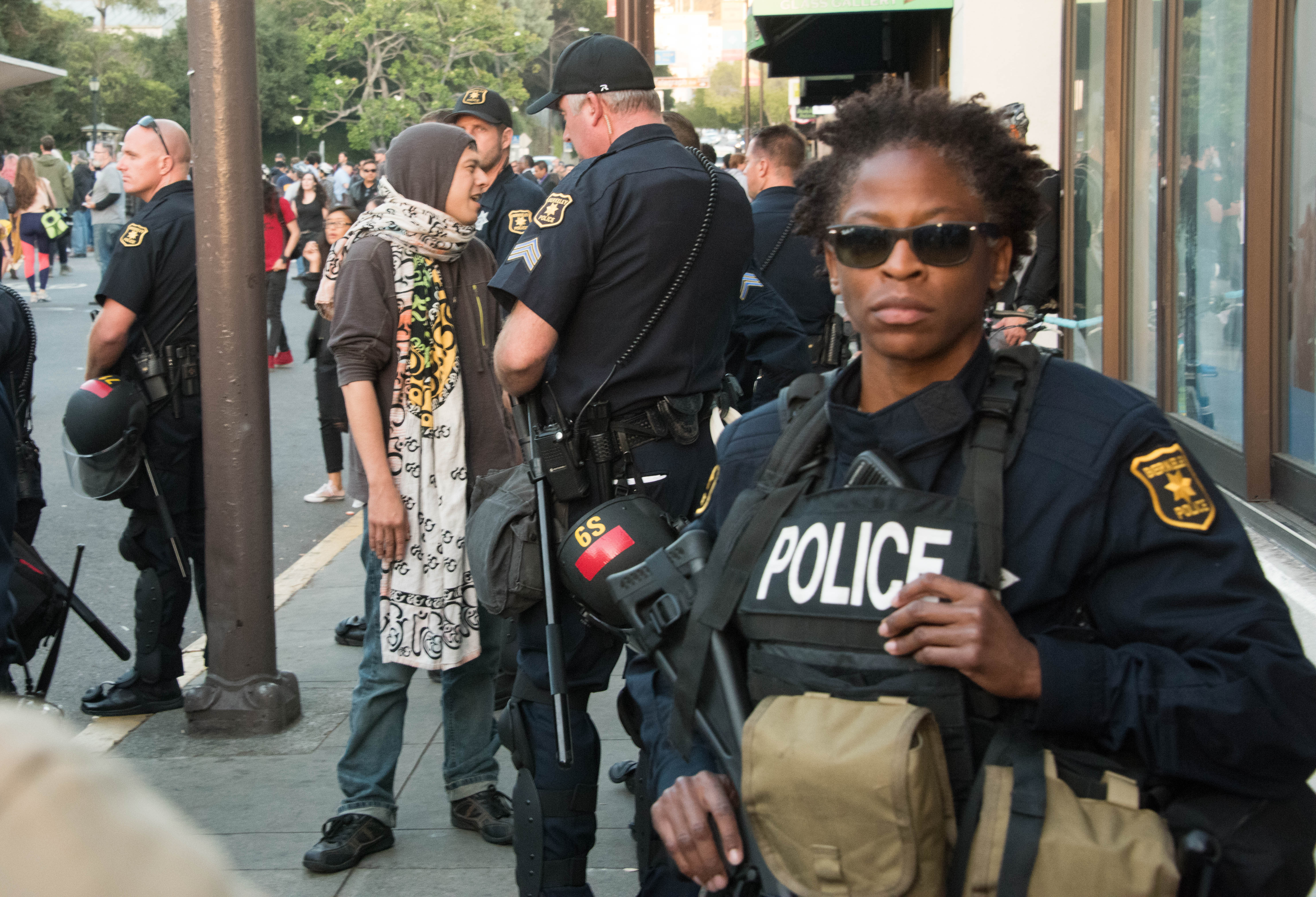 Oh wait, he’s white… oh well, scratch that racial profiling and insert fascist fashion police. I’d like to have heard what they were talking about, but about a dozen police were surrounding him and this nice lady with a big gun wouldn’t let me through.

I did talk to a number of other people, including a guy holding a sign proclaiming that speaker Ben Shapiro is a fascist. Conversation was friendly enough until I asked him, “Can you give me an example of Ben Shapiro saying something fascist?”

He couldn’t do it. Nor could anyone I asked. Their responses fell into the category of vague and unverifiable, such as “Everything,” or “He’s on the Internet.”

They knew nothing, but believed in it with all their heart. And where do they get this unwavering belief in nothingness? Back to the main stage, the speakers continued in two varieties:

The young lady in this video falls into the ‘useful idiot’ category. Oh, you think I’m being too harsh? Let’s examine what she says…

“But the free speech movement is, these fascists being given a stage…”

*** Umm, there are no fascists being given a stage. Ben Shapiro is not a fascist.

“Half a million dollars to make this campus into a police state. I don’t think that’s free speech…”

*** Well, she’s got that right, half a million bucks certainly isn’t free, but why is such an amount of money being spent, when the very same speaker was on campus last year without ANY security and without ANY incident? This girl and the mob surrounding her are the reason. She is the problem she wants to solve.

“I think that free speech is coming here and speaking out in front of all these people and telling you how I feel.”

*** Seriously? Her “feelings” are what free speech is all about? Okay, let’s hear it…

“Because Steve Bannon is not standing here.”

*** LOL. She doesn’t even know who is speaking, (Ben Shapiro not Steve Bannon), but she’s protesting anyways. No clue what the speaker is saying, certainly unaware that Shapiro doesn’t like Bannon either, but she’s up on stage expressing her ‘feelings.’

“He’s being protected by the school, by funds that are coming from our pocket. It’s a public university and I don’t think that’s right. Our taxes.”

(Actually I am laughing during her whole speech and you can see her glare at me occasionally in the video).

*** You know, I’ve had a bit of experience with fear, and I can tell you that when its real, you don’t pause to make a speech and tell everyone about it. As for her being pepper sprayed and beaten to a pulp… only if she does something even stupider than her speech.

It went on for awhile, and there was no meaningful content in anything she said. It was all feelings and falsities, but she got a nice round of applause from the mob and a smile of approval from the ‘community organizer.’

The crowd sees this unearned approval, and they want it too. For a young person still finding their way, this sort of approval and adulation, and being told that you are a hero fighting the forces of evil is like crack cocaine. It’s addictive.

It starts with something small and easy, like supporting equal rights for all races. But then it escalates, adding on more and more until arriving at full blown communism, in a package-deal made with the devil.

Given a choice between being an instant hero for nothing more than expressing feelings, the temptation is strong. It’s crack cocaine versus broccoli.

But the young lady and the mob do not see it that way, addicts never question their addiction. They see themselves as heroes, the stars of a David Bowie song…

And the shame, was on the other side
Oh, we can beat them, forever and ever
Then we could be heroes just for one day

Sorry kids, life is not a pop song and you are not heroes. Now go do your homework, and eat some broccoli while you’re at it.