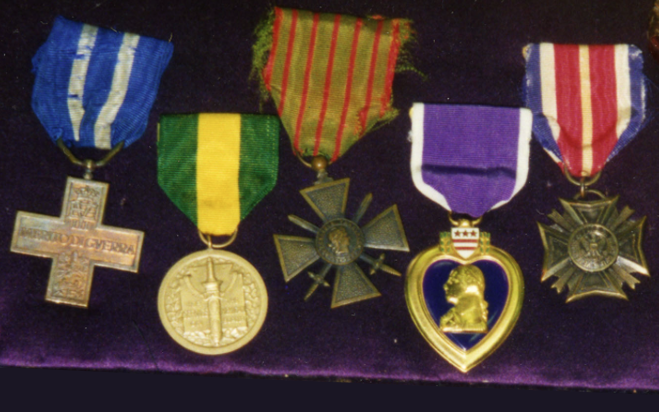 I’m pushing Mr. X down to Radiology in his wheelchair. He’s telling me the story about the time he drove Huntz Hall around Okinawa for a day on a USO tour.

I’ve heard it before, but I don’t mind listening again. He tells it so well.

“So Huntz Hall hadn’t made a movie in years,” says Mr. X, “and none of the guys knew who he was.

But I did; my Dad was a huge fan of the Bowery Boys. So Mr. Hall and me got on great. He signed a photo for me and I kept that until I lost the house in the flood.”

I believe Mr. X, even though any hard evidence of his day with Huntz Hall disappeared in the mud in 2008, because who would make that up? It just has the ring of truth, you know?

“I charged up San Juan Hill with Teddy Roosevelt” sounds like a lie; “I drove Huntz Hall around Okinawa on a USO tour” sounds like the truth.

But sometimes you just have to take what the veterans tell you with a grain of salt.

Imagine you’re in a room with three other veterans. They all won medals. You did the laundry on an aircraft carrier while it was parked in San Diego. Peer pressure is just as strong in men of seventy as it is in boys of seventeen.

When a man tells another man about the woman he had in Bangkok in 1971, that other man begins to sift through his memory for a similar woman to talk about, and if he had none he’ll make one up.

The veterans have a lot of time to talk, sitting in their rooms. A hundred channels on the TV and shelves of books and puzzles in the day room but you’re still going to get bored when you’re confined to bed.

Sometimes they are bold faced lies and everybody in the room knows it, but everybody laughs or cries or gets angry at the villain in the story just the same.

My father was a pathological liar. He made up phony Ph.D. certificates and hung them on the walls of his office. He had a plaque from the Phi Beta Kappa society, etched brass mounted on mahogany, upon which the word “scholastic” was misspelled. He also had a framed collection of military ribbons he claimed to have won in Korea. Among the ribbons was an Air Force Good Conduct Medal, an award that did not exist until 1961.

My Dad’s best friend was a real live decorated Korea veteran. I asked him after my Dad’s death if he knew Dad lied about his service record.

“Sure,” he said. “I asked him once what his service number was. He said he couldn’t remember. Man, you never forget your service number. But he was a great guy, a real saint, and my best friend. I’d never embarrass him by confronting him about it.”

Last year the Supreme Court considered the question of what we should do to people who lie about their service records. Not those with the intention of defrauding the VA, but those who tell the lie just to be admired.

The highest court in the land is considering the question of whether my father was a career criminal or simply a pathetic loser.

You can be sure that real veterans, real heroes, proud men and women who deserve our respect and our gratitude, will continue to sit around this hospital and tell each other tall tales and fish tales and shaggy dog stories and rumors and urban legends they got off the Web and the Readers’ Digest condensed version of the Truth and outright unabashed lies.

Because they may be heroes, but they’re also human.

2 thoughts on “To Tell the Truth”