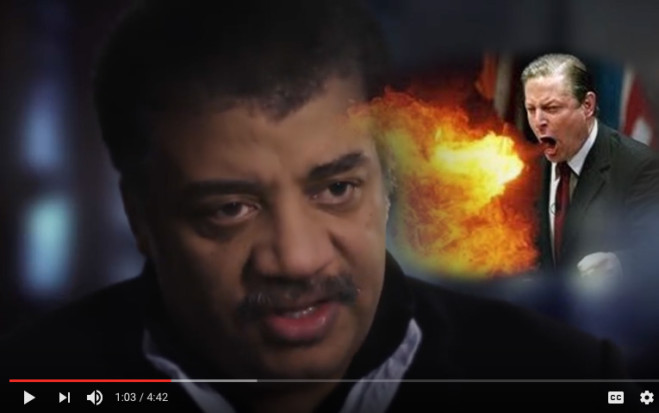 Celebrity scientist Neil Degrasse Tyson has a new video out on YouTube where he makes an impassioned plea for Science in America.

Not surprisingly, there is no science in the video whatsoever, instead a plea not for scientific skepticism, examination, and verification, but rather a command to conform and comply.

Our commentary on Tyson’s plea below. Neil DeGrasse Tyson quotes in bold.

“How did America go from being a backwoods country to being one of the greatest nations the world has ever known?”

By creating a society of unrivaled freedom, where people were able to pursue their own interests with the least amount of interference.

“And all of this required the greatest innovations in science and technology in the world. And so, science is a fundamental part of the country that we are.”

Yes. Science is great. No one disagrees.

Poor judgment is not a new phenomenon. Belief in things that are not true is perhaps more common today that it has been in decades. A belied in catastrophic climate change may very well be one of them.

“And when you have people who don’t know much about science, standing in denial of it, and rising to power, that is a recipe for the complete dismantling of our informed democracy.”

Is it? How? And do you seriously believe America is an “informed democracy?”

Video shows Mike Pence saying, “Let us demand, that educators around America teach evolution not as fact but as theory.”

Okay, let us suppose that children are taught that evolution is a theory. How exactly would that lead to the complete dismantling of democracy? There was democracy long before Darwin published his findings.

“An increasing number of parents show skepticism about vaccinations.”

Yes, so do many scientists and doctors.

“Voters have approved a ban on GMOs.”

Yes, and how exactly does whether people eat GMO corn or regular old corn threaten democracy? But this video isn’t really about evolution, vaccines, or GMOs is it?

Ah yes, here we go. All those other examples were just for conflation. Find some other marginal views and attempt to link them emotionally with the real subject.

“That’s not the country I remember growing up in. Not that we didn’t have challenges. I’m old enough to remember the 60s and the 70s, with a hot war and a cold war and civil rights movement.

Mr. Tyson’s memory isn’t a substitute for reality. The hippies and back to nature movements of the 60s were expressly anti-science. As Bertrand Russell put it, “Even more purposeless, more void of meaning, is the world which Science presents for our belief…”

“All this was going on, but I don’t remember anytime when people were standing in denial of what science was.

And who is standing in denial of what science is now? Who is saying, “Hypothesis, experiment, and observation are invalid.” No one, that’s who. Do some people disagree with things that are largely accepted as scientific fact? Yes they do. But disagreement is a part of science, without it people would still believe the world is flat.

“One of the great things about science is that it is an entire exercise in finding what is true.

Yes, this is true. And this exercise needs to continue, even after you’ve gotten an answer that appeals to your politics.

“A hypothesis, you test it. Get a result. A rival of mine, double checks it. Because they think I might be wrong. They form an even better experiment and they find out, “hey, this experiment matches.” Oh my gosh, we’re onto something here.

Yes indeed. And what if the rival comes up with a better experiment that contradicts your results? Do you then examine and discuss their findings, or do you declare that the ‘science has been settled,’ and make misleading YouTube videos?

“And out of this rises a new emergent truth. It does it better than anything else we have ever come up with as human beings.

Yes, but the process is neither immediate nor infallible. Among those emergent truths were the existent of the Ether, Phrenology, Cold Fusion, and that Pellagra was contagious. All proven wrong.

Actually you do have the right to not believe in E=MC2, just as many scientists did when that theory was proposed.

“When you have an established emergent truth, it is true, whether or not you believe in it. And the sooner you understand that, the sooner we can get on with the political conversations how to solve problems that face us.

“So once we understand that humans are warming the planet, you can then have a political conversation about that. You can say, “Should we order carbon credits, should we do this, do we put a tariff, do we fund, do we subsidize…” Those have political answers.

And once you understand that it has not been established whether human activity has a significant role on climate, on what time scale warming or cooling is best measured, how to even establish what a “global temperature” is, or whether warming is good or bad.

“And every minute one is in denial. You are delayin the political solution that should have been established years ago.

Oh, now Mr. Tyson know what solution should have been established years ago? What happened to political discussion?

“As a voter, as a citizen, scientific decisions will come before you, and isn’t it worth it, to go, “alright, let me at least become scientifically literate, so I can think about these issues and act intelligently apon them.”

Indeed, people should become scientifically literate, and they won’t achieve that by watching this video.

“Recognize what science is, and allow it to be what it should and can be, in the service of civilization.

Yes, please do recognize what science is: a methodology, a process, not an ideology or an authority.

That scares me more than anything else.

Neil DeGrasse Tyson’s plea is little more than an appeal to authority, his own, as a celebrity scientist. Mr. Tyson would do well to refresh his memory on what the scientific method actually is: