Where Marta Ortega’s family used to raise pigs is now being overtaken by jungle.

Instead of farming, her children have moved to New York or Panama City, and Marta now gets her food at the supermarket.

In tropical countries around the world, farms are reverting to nature, as people abandon their land and move to cities in search of a better life.

These secondary forests have set off serious debate about the legitimacy of efforts to “save the rain-forests.”

By one estimate, for every acre of rain forest cut down, more than 50 acres of new forest are growing on land that was once farmed, logged or hit by natural disaster — every year.

Marta Ortega sees the difference on the land where she grew up, saying, “There is far more forest here than there was 30 years ago.”

And it isn’t only the Amazon. In Asia and Central America, rainforests are booming.

Felipe Garcia’s shack backs up against a wall of forest. “My neighbors abandoned their farm seven years ago,” says Garcia, a farmer.

“Now the jungle has taken over their property once again.” He strokes his round belly, and says: “And if I don’t till my field, it’ll look the same way in a few years.”

Garcia is one of the few residents of the small town of Chilibre who still makes a living farming. Most of the local farmers abandoned their farms long ago. “Farming is too hard work for the young people,” Garcia complains. “They prefer to work in the capital.”

Globalization and more efficient industrial farming is having the counter-intuitive effect of greening the planet.

According to the most recent “State of the World’s Forests Report” by the United Nations, there were an estimated 2.1 billion acres of replacement forest growing in the tropics — an area almost as large as the United States.

The idea has stirred outrage among environmentalists who believe that efforts to protect native rain forest should remain a top priority.

But, “Biologists were acting as if only original forest has conservation value, and that’s just wrong,” said Joe Wright, a senior scientist at the Smithsonian Tropical Research Institute.

“Is this a real rain forest?” Dr. Wright asked, walking the land of a former American cacao plantation that was abandoned about 50 years ago, and pointing to fig trees and vast webs of community spiders and howler monkeys. 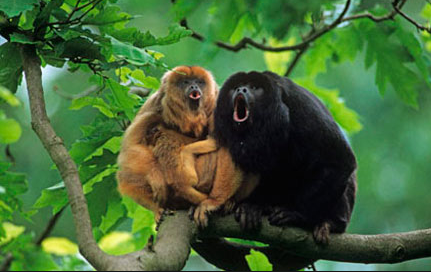 “A botanist can look at the trees here and know this is regrowth,” he said. “But the temperature and humidity are right. Look at the number of birds! It works. This is a suitable habitat.”

Dr. Wright and others say the overzealous protection of rain forests not only prevents poor local people from profiting from the rain forests on their land but also robs financing and attention from other approaches.

But other scientists, including some of Dr. Wright’s closest colleagues, disagree, saying that forceful protection of rain forests is especially important in the face of threats from industrialized farming and logging.

The issue has also set off a debate over the true definition of a rain forest. How do old forests compare with new ones in their environmental value?

Everyone, including Dr. Wright, agrees that large-scale rain-forest destruction in the Amazon or Indonesia should be limited or managed.

Just last month, the United Nations environment ministers agreed that developing countries would be rewarded for preventing deforestation. But little is known about the new forests — and they were not factored into the equation.

Dr. Wright said he knew he was stirring up controversy when he suggested that rain forests might not be so bad off.

But having lived in Panama for 25 years, he is convinced that scientific assessments of the rain forests’ future were not taking into account the effects of population and migration trends that are obvious on the ground.

Better farming techniques and access to seed and fertilizer mean that marginal lands are no longer farmed because it takes fewer farmers to feed a growing population.

Another factor in the regrowth of rainforests are increases in atmospheric CO2, which encourages plant growth.

According to Oliver L. Philips of the University of Leeds, “So if the nations of the world are truly concerned about the health of “old growth forests in Amazonia” — as they truly should be — they had better not be in too great a hurry to drastically curtail anthropogenic CO2 emissions.”