June 9th, 2015
Stupid Doctors & How I Cured My Persistent Cough 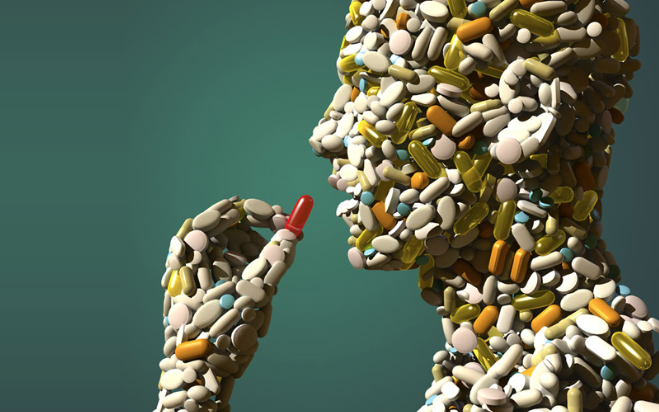 For two years I was hacking up a lung. It was interfering with my sleep, with my job, with my life, and there seemed to be no cure for it.

The funny thing is, I didn’t feel sick. I felt normal in every way except that I could not stop coughing. There was a little tickle in the back of my throat, and every time it tickled, I’d try to cough it away.

It all started shortly after returning from a trip to Cambodia. At first I thought I just had some sort of cold and it would pass. But after two weeks, after two months, it didn’t seem to be going anywhere.

At work it was a bit of a pain. I frequently had to attend meetings and trying to restrain myself from coughing just made it worse.

My girlfriend started nagging me to go see a doctor, and after about, ohhhh, six months I relented.

Clearly something was wrong with me, and it wasn’t getting any better.

So off I went to the San Mateo Medical Center – an award winning institution filled with super-smart doctors. Surely a cure was near at hand.

Well my doctor certainly looked the part, like a young George Clooney. He asked some questions, poked, prodded, ran some tests, and then told me what I did not have.

I did not have bronchitis, asthma, allergies, bacterial infection, virus, deviated septum, or Gastroesophageal reflux disease, whatever that is.

What I did have was a post-nasal drip. Fancy doctor talk for saying that I had a tickle in the back of my throat. 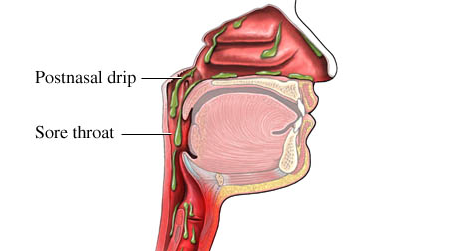 Since he basically just repeated back to me what I had told him using different words, I figured that meant he had no clue what my problem was either.

And then he confirmed it.

Even though he had ruled out a bacterial infection, he then prescribed an anti-biotic. Why I do not know.

Maybe he gets a kickback from the pharmaceutical company for every prescription written, maybe he just wanted to get rid of me, or maybe he thought, ‘what the heck’ lets give it a go.

I nearly called him out on it, but, having lived with this cough for six months already, I was very much ready to give anything a try.

So I filled the prescription and took the pills for the next ten days.

My goodness I thought. Is the way I’m going to be for the rest of my life?

After another couple of months my girlfriend was on my case about going back to the doctor. “What for,” I said, “He was useless. He had no idea what was wrong with me and showed no interest in finding out.”

After a year of coughing it was getting worse. It was becoming more and more difficult to sleep. As soon as I lay down the “drip” would act up with a vengeance and I was practically having convulsions trying to repress the cough.

It was time to take matters into my own hands. Well, it was way past time, but this is when I began.

If my problem actually were ‘post-nasal drip,’ basically mucus that drains out the back of the sinus into my mouth, rather than the normal route out the nose, then what could I do about it?

Well… how about “get that snot out of there?” Seemed like an obvious solution, but how to do it?

A little bit of websurfing later and I discovered a very old device that has its roots in ancient Hindu Ayurveda medicine. Many of you have probably heard of this thing, but it was completely new to me, and I couldn’t help but wonder why my doctor hadn’t mentioned it.

Basically a mini tea-pot that you put saline solution into, and then pour it into one nostril and let it drain out the other, washing out the sinuses as it goes. 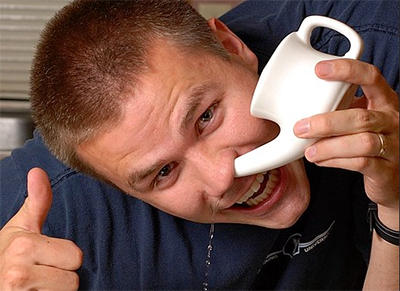 Under normal circumstances I never would have tried it. It seemed to me to be rather stupid, dangerous even to pour water into my nose. Wouldn’t I drown?

It turns out that I didn’t drown, and that for the first time in over a year, I could go for a couple hours without coughing. Enough to get to sleep, enough to get through a meeting, enough to be sort of normal, a few hours at a time.

That two-dollar piece of plastic gave me far more relief than George Clooney ever did, and though I was not cured I was thankful for whatever I could get.

Well, except for the big hunk of phlegm I’d cough up every morning, and the continued coughing attacks throughout the day between cleanses.

I figured that over time, these frequent cleanings would eradicate the problem, but I was wrong about that. Another year went by and still I was a coughing maniac.

You could say that the engine had a ‘post-nasal drip,’ and the frequent oil changes were the equivalent of my neti-pot rinse outs. It kept the thing running in the near term, but it did not fix the problem. 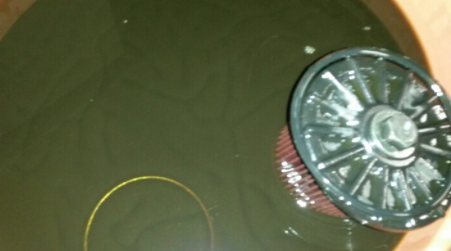 In the motorcycle’s case, it needed a new water-pump, a bushing had worn out and fluid was leaking into the crankcase.

As for my case, the actual cause was still unknown, so after much nagging, I decided to give the professional medical establishment one more try.

My new doctor was a young Asian guy, fresh out of med school and with all the eagerness of a young gun ready to prove himself. He seemed really interested to figure out my problem, but after exhausting all the same tests and questions, I could see by the look on his face that he didn’t really know the cause either.

He suggested that my situation might be a case of just managing the symptoms as well as possible instead of an outright cure. He prescribed me some nose spray and over the counter medicine.

I took the pills and sprayed the spray, and… I did improve.

The drip was still there, and so was the cough, but much less frequent. I reported back to doctor young gun and he seemed satisfied at a job well done.

He had prescribed drugs to me, and my symptoms improved. Case closed, right?

Don’t get me wrong, I was happy at some improvement. But I was really not thrilled at the prospect of depending on these drugs for the rest of my life.

What I really wanted to know is ‘WHY’ I was coughing? What was causing the post-nasal drip?

Taking these drugs was the equivalent of trying to fix the motorcycle engine by pouring some sludge into it to plug the holes up. Just repressing the symptoms, not really fixing anything.

The process of receiving a prestigious degree seems to shut down a part of their brain, the investigative, curious part is replaced by a kind of self-confident blindness.

With no further help expected from the professional medical establishment, I turned my attention back to the Internet.

Although I had told both of these doctors that as best I could recall, my cough began shortly after returning from Cambodia, neither seemed to give that any credence whatsoever. 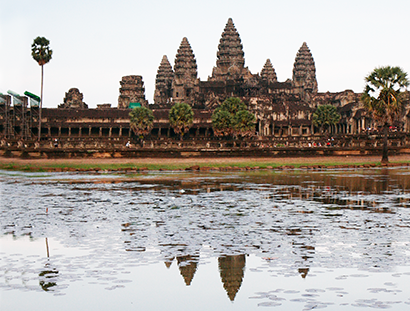 So I Googled, “Cambodia persistent cough,” and began wading through the results for something I hadn’t already heard.

Somewhere way past the commercial medical websites, the mayo clinic, the endless advice to ‘go see your doctor,’ I found a report of a woman who had a persistent cough for three years after a vacation in Southeast Asia.

And what’s more, she had been cured, CURED, by a doctor in New York who had identified her problem as a fungus, and prescribed an experimental drug.

This seemed to be a very likely cause of my problem, after all, I had spent a lot of time exploring ancient ruins, often in dark damp spaces filled with molds and fungus.

Of all the tests and possibilities brought up by my doctors, the idea of a fungus had never come up.

Do I get on a plane and track down the New York doctor? Do I print out the article and show it to one of my own doctors?

If there is a natural solution to my problem, I want to try that first, and natural solutions are not the modern doctors point of departure. Their educations are based on prescribing drugs, and thus, that is what they do.

That hasn’t been working out so well for me, and so, before throwing myself at the mercy of ‘the experts,’ I’d first try to do it myself.

No one cares more about my health than me, and besides, when I was hiking around Cambodia, I did not see people coughing and hacking everywhere.

Nature has already found a solution. I just needed to find it too. Back to Google to search for, “Anti-fungal foods.”

These foods, along with apple cider vinegar and grapefruit seed extract became my medicine.

Within a week my cough was gone. Vanished. Cured. After two years of coughing hell, I could breath, sleep, and be my normal self again.

I wondered, is there any Western doctor that would prescribe coconut oil, ginger, vinegar, and grapefruit seed extract?

Is anything at all about the healing properties of food taught in medical school?

If it hadn’t been for a little persistence and curiosity I’d likely be on some kind of drugs for the rest of my life, instead I’m just eating healthy delicious food, and feeling great.

4 thoughts on “Stupid Doctors & How I Cured My Persistent Cough”