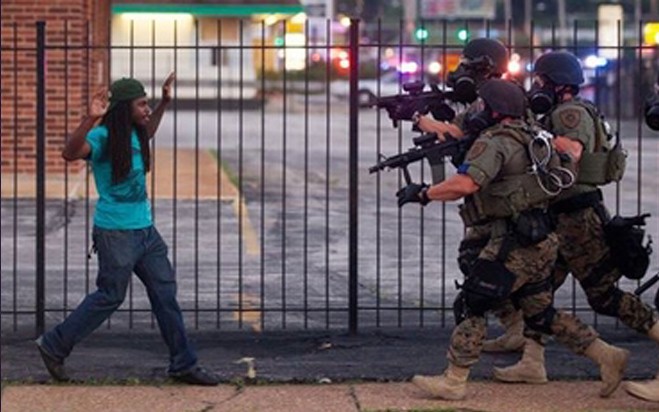 The “narrative” of Ferguson, Missouri changed somewhat. But, amid the confusion, the blundering stupidity of the city’s police department remains consistent.

So the 18-year old shot dead by Chief Jackson’s officer was no longer a “gentle giant” en route to college but just another crappy third-rate violent teen n’er-do-well.

Then the chief gave a second press conference. Why would he do that?

Well, he’d somehow managed to create the impression in his first press conference that the officer who killed Mr Brown was responding to the robbery. In fact, that was not the case. The Ferguson policeman was unaware that Brown was a robbery suspect at the time he encountered him and shot him dead.

So we have an officer who sees two young men, unwanted for any crime, walking down the middle of the street and stops his cruiser. Three minutes later one of them is dead.

On the other hand, Jackson further confused matters by suggesting that he noticed Brown had cigars in his hand and might be the suspect.

It’s important, when something goes wrong, to be clear about what it is that’s at issue. Talking up Michael Brown as this season’s Trayvonesque angel of peace and scholarship was foolish, and looting stores in his saintly memory even worse.

But the most basic problem is that we will never know for certain what happened.

Why? Because the Ferguson cruiser did not have a camera recording the incident.

Ferguson Police Department apparently has at its disposal tear gas, riot gear, armored vehicles and machine guns …but not a dashcam.

It’s about as cheap and basic a police expense as there is. And, if we have to have federal subsidy programs for municipal police departments, we should scrap the one that gives them the second-hand military hardware and replace it with one that ensures every patrol car has a camera.

And speaking of military hand-me-downs, of what possible use could “camouflage” fatigues be in a concrete strip-mall?

Indeed. To camouflage oneself in the jungles of suburban America, one should be clothed in Dunkin’ Donuts and Taco Bell packaging.

This is not a small thing.

“The police” is a phenomenon of the modern world. It would be wholly alien, for example, to America’s Founders.

In the sense we use the term today, it dates back to the founding of the Metropolitan Police in 1829. Because Londoners associated the concept with French-style political policing and state control, they were very resistant to the idea of a domestic soldiery keeping them in line.

So Peel dressed his policemen in blue instead of infantry red, and instead of guns they had wooden truncheons.

When the police are dressed like combat troops, it’s not a fashion faux pas, it’s a fundamental misunderstanding of who they are.

Forget the armored vehicles with the gun turrets, forget the faceless, helmeted, anonymous Robocops, and just listen to how these “policemen” talk.

Look at the video as they’re arresting the New York Times and Huffington Post reporters. Watch the St Louis County deputy ordering everyone to leave, and then adding: “This is not up for discussion.”

You may be carrying on like the military commander of an occupying army faced with a rabble of revolting natives, but in the end you’re a constable. And the fact that you and your colleagues in that McDonald’s are comfortable speaking to your fellow citizens like this is part of the problem.

The most important of the “nine principles of good policing” (formulated by the first two commissioners of the Metropolitan Police in 1829 and thereafter issued to every officer joining the force) is a very simple one: The police are the public and the public are the police.

Which brings us back to the death of Michael Brown. Let’s assume for the sake of argument that everything the police say about this incident is correct.

In that case, whether or not the fatal shooting of Mr Brown is a crime, it’s certainly a mistake. When an unarmed shoplifter in T-shirt and shorts with a five-buck cigar box in one hand has to be shot dead, you’re doing it wrong.