While I was in Egypt this past summer, my local tour guide brought me to a fancy resort for a rest between the Pyramids and the Museum.

We sat on lounge chairs by the pool. A waiter arrived and I ordered a beer. The occasion seemed to call for it. After all, what could be more refreshing than an ice-cold beer after hiking through the desert?

He looked at me like I had lost my mind, and I took that as a ‘no.’

The waiter returned with our beverages and I explained, “I don’t usually drink beer, but today is a special occasion.”

And then my guide spoke in a low tone, “I drink beer when I’m back home with my friends sometimes,” like he had just confessed a mortal sin.

And then I realized, that he had. 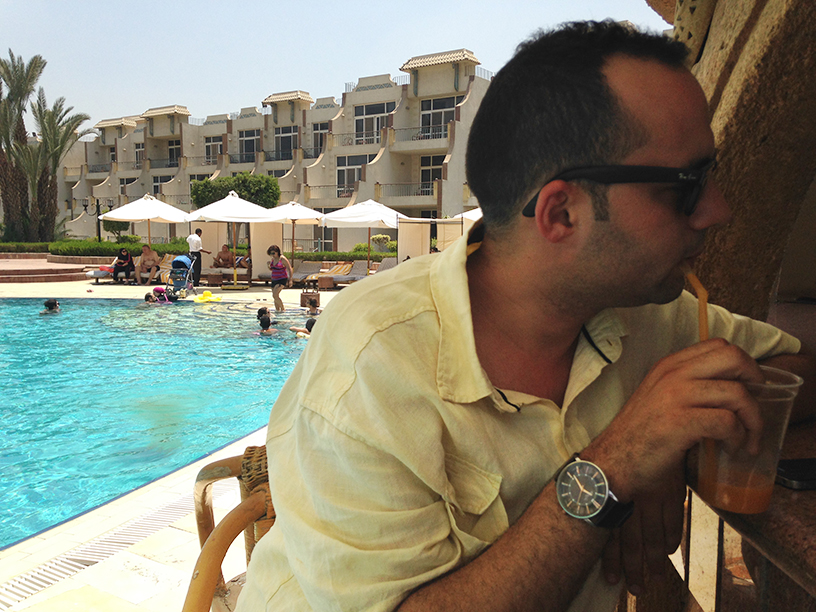 Egypt is a Muslim country and alcohol is forbidden.

Oh sure, alcohol is served to infidels like myself with a big smile. Morality and judgment set aside when it comes to separating tourists from their money.

But in a weird sense, I was more free than my guide in his own country. Although he might enjoy a beer, he would not order one, nor even let it be known that he might want to.

It cannot be because he fears for his mortal soul, as he’s already told me that he drinks while at home.

Instead, he denies himself because he is afraid of the scorn of less liberal Muslims than himself. Perhaps the waiter, or the towel boy, or one of the splashing guests in the pool.

What would they do? Maybe give him a dirty look, or call security, or leap up with a sword yell Allah Akbar and chop off his head. Who knows?

More likely, none of them would do a thing. Perhaps they might even look at him in envy and wish that they were brave enough to sip a cool one too, like they do at home in secret.

What I do know, is that moderate Muslims like my guide, are ruled by the radical ones, wherever they are.

The reason is quite simple.

When a true believer, a fundamentalist, a radical, believes that you can justifiably be killed for sinning against Islam, then, well, you do what you must to keep your head intact.

The moderates may even be the vast majority, but it doesn’t matter.

Most Muslims are moderate, but it doesn’t matter.

Moderate Muslims do not matter.

Not in their own country, not in yours.

As Mark Steyn once put it, “You can’t say that Muslims are crazy and murderous, otherwise they might go nuts and kill you.”

The kind moderate Muslim knows it’s true, and acts accordingly. This is why you do not see a mass protest of the kind, moderate, peaceful Muslims against the frequent atrocities of their radical cousins.

I don’t blame them.

But at the same time, this fearful silence, or the cheerful rebuttals of Islam being a religion of peace, provide useful cover for the radical to continue their rule.

For this, I do blame them.

The person who hands their lunch money over to a bully may save themselves harm, but they merely pass along the harm to the next person to be bullied, and the next, and the next.

I feel no empathy for such a person. Their behavior is the height of selfishness.

And here we come full circle to the plight of the Syrian refugees.

No doubt many, perhaps most, but certainly not all, are kind moderate people who are just seeking an escape from the horrific violence in their own country.

But among them, are radicals, true believers, the rulers of the moderates.

And if they have their way, neither will your grandchildren.