April 2nd, 2014
Unless we Change our Ways… The Future Looks Awesome.

A recent NASA study predicted that civilization would end in the next 20 years if we do not change our ways.

The study made the rounds on social media as such sensational predictions are apt to do. But there were a couple problems with the “study.”

First of all, it was not a NASA study. A few days later NASA released this official statement saying that they did not author, nor approve the conclusions of the authors.

“A soon-to-be published research paper… Modeling Inequality and Use of Resources in the Collapse or Sustainability of Societies’ by University of Maryland researchers Safa Motesharrei and Eugenia Kalnay, and University of Minnesota’s Jorge Rivas, was not solicited, directed or reviewed by NASA. It is an independent study by the university researchers utilizing research tools developed for a separate NASA activity. As is the case with all independent research, the views and conclusions in the paper are those of the authors alone. NASA does not endorse the paper or its conclusions.”

It was those author’s conclusions, rather than any scientific findings, that made the rounds on Facebook and Twitter. And they sound a lot more like political science than just science. For example:

“Elite power, the report suggests, will buffer “detrimental effects of the environmental collapse until much later than the Commoners,” allowing the privileged to “continue ‘business as usual’ despite the impending catastrophe.”

It’s really nothing but Marxism dressed up as science. Here’s another one:

“The two key solutions are to reduce economic inequality so as to ensure fairer distribution of resources, and to dramatically reduce resource consumption… and reducing population growth.”

In his 1968 book The Population Bomb, scientist Paul Ehrlich declared: “In the 1970s the world will undergo famines — hundreds of millions of people are going to starve to death.”

In 1977, President Jimmy Carter, confidently predicted that “we could use up all of the proven reserves of oil in the entire world by the end of the next decade.”

Yet 20 years later, proven oil reserves are more bountiful than ever, all the minerals that the U.N. said would be gone are plentiful and cost less, and there is less hunger and malnutrition nearly everywhere in the world.

The end of the world has had to be rescheduled.

The latest estimated time of arrival for the apocalypse is 2032. The United Nations Global Environmental Outlook predicted:

“the destruction of 70% of the natural world in 30 years, mass extinction of species, and the collapse of human society in many countries… More than half the world will be afflicted by water shortages, with 95% of people in the Middle East with severe problems… 25% of all species of mammals and 10% of birds will be extinct…”

Etc., etc., for 450 pages. But let’s cut to the chase: As one eco-reporter put it, “Unless We Change Our Ways, The World Faces Disaster.”

Ah, yes. The end of the world is endlessly rescheduled but the blame always rests in the same place: It’s your fault. Along with that contemptible free market that provides every known improvement to human well-being.

And yet, the UN Environment Program believes that “under the ‘markets first’ scenario the environment and humans did not fare well.”

The absence of a “markets first” approach in the Soviet Union resulted in more environmental devastation, including the complete vaporization of the Aral Sea, and human suffering than the wildest fantasies of the sinister Exxon/Walmart/Koch brothers axis of excess.

In Haiti, use of renewable fuels has resulted in nearly every tree in the country being cut down, while the neighboring Dominican Republic enjoys not only lush forests but inexpensive fossil fuels. 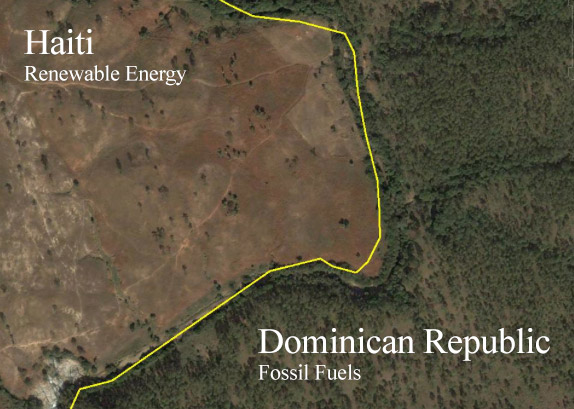 And what has North Korea gotten for its lack of a “markets first” approach? Human suffering, and ecological blight. According to a Dutch scientist who visited the regime, “Wildlife is scarce in the country, and the landscape is basically dead.”

And what of the rest of the world?

In richer countries water and air pollution are down, species have been restored to the wild, and forests are increasing in size.

Forty years after the first doom-mongering eco-confab in Stockholm, it should be obvious even to the UN frequent-flyer crowd. Markets aren’t the problem, markets are the solution.

The best way to clean up the neighborhood is to make people wealthier. To do that, you need free markets, democracy, the rule of law and public accountability. None of those things exist in the Middle East, nor in the last few nations silly enough to actually try to do what the U.N. advises.

Since 1970, when a small forest was chopped down to print Paul Ehrlich bestseller, the U.S. economy has grown by 150%, traffic has increased by 143%, and energy consumption has grown 45%.

During this same period, air pollutants have declined by 29%, toxic emissions are down by 48.5%, and airborne lead reduced by 92%.

Behold the “disastrous” path of the free market: 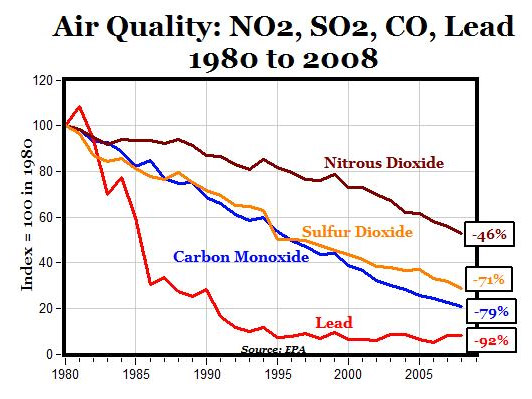 For anywhere other than Antarctica and a few sparsely inhabited islands, the first condition for a healthy environment is a strong economy.

President Carter and the other doomsayers made a simple mistake. In their predictions about natural resources, they failed to take into account the natural resourcefulness of the market.

The government regulates problems, but the market solves them.

So if, as Kyoto does, you seek to punish capitalism in the West and restrict it in the developing world, you’ll pretty much guarantee a poorer, dirtier, unhealthier planet.

It’s a cult, and, like most cults, heavy on self-righteous and time-consuming rituals like “recycling,” an activity of no benefit other than as a visible profession of faith.

But, in fact, environmentalists, like most cultists, are crippled by tunnel vision. They cannot or will not “think globally” because they refuse to see what is happening in the real world. In the real world, things are getting better for almost everyone almost everywhere (including ‘the planet’).

Unless we change our ways, the future looks awesome.

One thought on “Unless we Change our Ways… The Future Looks Awesome.”