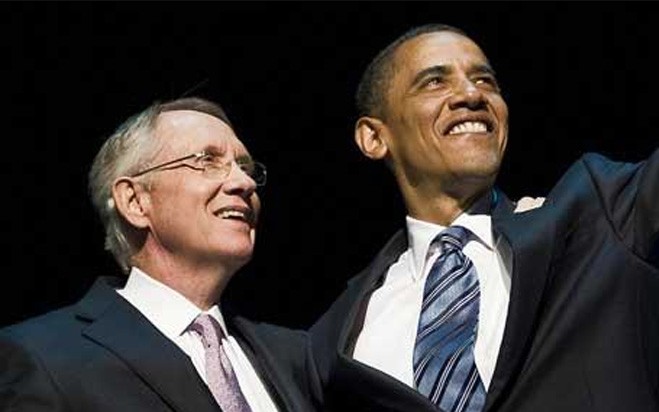 It’s a shame that smacking people upside the head is socially unacceptable, since suitable occasions so often present themselves.

Yesterday was one such occasion, when I overheard a conversation that went like this:

“Did you hear that the government might shut down?”
“Yeah, it’s those stupid Republicans.”
“I hate those Tea Partiers.”

Perhaps you’ve heard or participated in a similar conversation. And I suppose that people can’t be blamed for simply repeating the opinions that were “given” to them by newscasters.

But it’s just not true.

A little fact checking reveals that House Republicans have voted unanimously to fund the U.S. government —TWICE— in the past week.

So why the confusion and outrage?

Well, it turns out that the House of Representatives is trying to do their job of representing the will of the people, who according to recent polls oppose both a shutdown and Obamacare.

So who is shutting the government down?

Both would rather shut the government down than accept any resolution from the people’s representatives that does not fund Obamacare.

Like 6 year-olds throwing temper tantrums, if they do not get their way.

What is at stake in this showdown, is whether the next great entitlement program will be imposed on the country against its will.

Both are well aware that if Obamacare were again put to a vote, it would fail in both Congress and the Senate.

Few disagree that if put to a popular vote by the American public it would be buried in a landslide.

Not even the unions that supported Obama want the damn thing.

So why is the outrage in the press towards Congress for doing its job? For using its power of the purse, to defund a program that the majority does not want?

“We would hope that Mr. Boehner would have compassion for thousands of moderately paid breadwinners who would find themselves in very difficult circumstances. We would hope he would be troubled by how a shutdown would disrupt research at the National Institute of Health and safety inspections at the Food and Drug Administration.”

But since it is Harry Reid and Barack Obama who are shutting the government down, why doesn’t the Post “hope” for compassion from them?

The answer is simple. The Post is part of the “Liberal” press, in which the left is never to blame for anything.

Assume that John Boehner came out and said: “I read the Post’s concerns and I share them. Therefore, at my direction, the House will vote this afternoon to fully fund both agencies.”

Does anyone seriously think that the Washington Post would celebrate Boehner’s compassion the next morning?

The Post, MSNBC, The New York Times, etc. are more interested in whipping up political animosity, and blaming Republicans for a government shutdown they have voted twice to avoid.

This struggle confirms a couple of things.

1. On issues where fiscal conservatives oppose big spending liberals, the Washington press corp. acts like a PR firm for the Democratic Party.

2. The average liberal is about as obedient to what they are told by the press as an obedient poodle. Sit, Stay, Obamacare, Shake a Paw, Rollover.

A bigger problem however, are the number of spineless Republicans, who like to talk a big talk, but scurry for cover as soon as actual fighting breaks out.

Their excuses are always the same.

Some even suggest that they should let Obamacare take effect, as it will prove such a disaster, that it will help their election chances in 2014.

Such people do not belong in the governing of a nation.

And yet the fact remains, House Republicans have twice voted to fund the U.S. Govt, while Harry and Barry have done just the opposite.