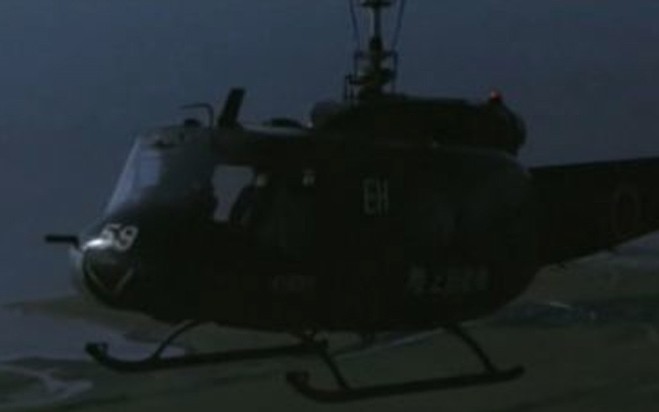 An Army Reserve helicopter nearly collided with a UFO over central Ohio on the night of October 18, 1973.

As they returned to Cleveland that night it was clear and the helicopter was flying at 1,700 feet above rolling terrain. At about 11:00 p.m., over Mansfield, Ohio, one of the crew noticed a red light on the southeast horizon and told Coyne, who said “keep an eye on it.”

A few seconds later the crewmember said the light was moving toward them on a collision course. Coyne put the UH-1 into a 500-feet-per-minute descent. He called the Mansfield control tower to check on nearby traffic but got no response (a follow-up found no other civil or military airplanes in the area).

The red light kept approaching, and Coyne kept the ship in a descent until they had just about reached the ground—about 650 feet up. As the object reached the UH-1, it stopped and hovered above and in front of the helicopter.

A cigar-shaped, domed object almost filled the front windshield. It had a red light at the bow, a white light at the stern, and a movable beam that swung from the bottom of the object over the nose of the helicopter and into the cockpit, filling it with green light.

Figure 5 is a drawing of what Coyne and his crew saw. 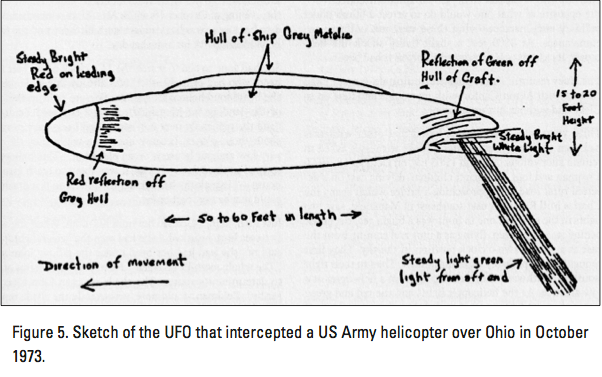 The object stayed over the helicopter for an estimated ten seconds and then sped off to the west and eventually out of sight to the north in the direction of Lake Erie. As the object left, the heli- copter’s magnetic compass swung wildly and the UH-1 climbed to an altitude of 3,500 feet even though Coyne was still holding the control lever for descent.

Nearby, a family of four was driving on the road below. They saw a red and a green light descend rapidly toward their car and they stopped and got out of the car to look at it, when they also heard and then saw the helicopter approaching from the south.

They then saw the red-and-green lighted object, which they said looked like a blimp and was as big as a school bus, hovering over the helicopter. The green light suddenly got brighter and lit up the helicopter as well as the family on the ground beneath, who, now thoroughly frightened, scrambled back into their car and drove off.

Was this a misperception or a hoax? Military officers and flight crew who want to keep their jobs do not report hoaxes. The UFOs and the Cold War 9independent ground witnesses and the flight report filed by Lieutenant Coyne agree about the details of the encounter.

Was the UFO a secret military or civil aircraft?

Only if the United States or a foreign power was testing a secret aircraft over Ohio in the middle of the night and while doing so, dangerously interfering with a routine military helicopter flight. It was seen at close range and was not recognized by any of the witnesses as a military or civil aircraft.

Its performance was extraordinary. Forty years later, no existing aircraft can do what that UFO did.