There’s a video making the rounds on Facebook and YouTube that seems to be making quite an impression on people.

Unfortunately, it is so filled with false assumptions that the impression it makes is not only wrong, but potentially dangerous.

The video shows that the way people think the wealth is ‘distributed’ in America, and the way that it is actually distributed is quite different.

If you have not seen the video, here it is:

But even in its simple proposition, it makes three key errors.

Wealth is not “distributed.” There is no big pile of money or goods awaiting ‘distribution’ by the presenter or anyone else.

Instead, the wealth making “process” is distributed, albeit unevenly. But by focusing on the “outcome” the video creates the false impression that the outcome can, or should be managed.

The video defines wealth as ‘money,’ but in reality the wealth of a nation is made up of the goods and services people enjoy. Wealth is the fresh food at the supermarket, reliable phone service, and the TV set that can be purchased for less than two days labor at the average wage.

If a person has $200, we may say that his wealth is $200, but if that person then buys an iPhone, they have not become less wealthy. They have traded a financial asset for something that ‘enriches’ their life.

The notion that an outside observer, whether a kind-hearted genius or 5000 random people, can design the ideal society made up of hundreds of millions of individual people, each with individual dreams, talents, and intentions, is a false one.

Beside these three basic errors, there are numerous other misrepresentations in the video. Here are some of them:

At one point, the presenter shows an equal distribution of the existing wealth in America across all people, and proclaims, “Here is the dreaded Socialism.” 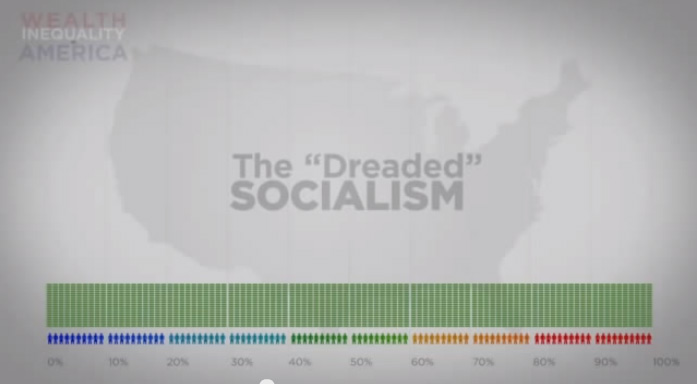 To his credit, he quickly adds, “We all know that won’t work,” although I got the distinct impression that he wishes it would. And if the “dreaded socialism” were anything like his chart I’d wish it would too.

In Soviet Russia, North Korea, Cuba, and every other socialist country the curve looks much more like this: 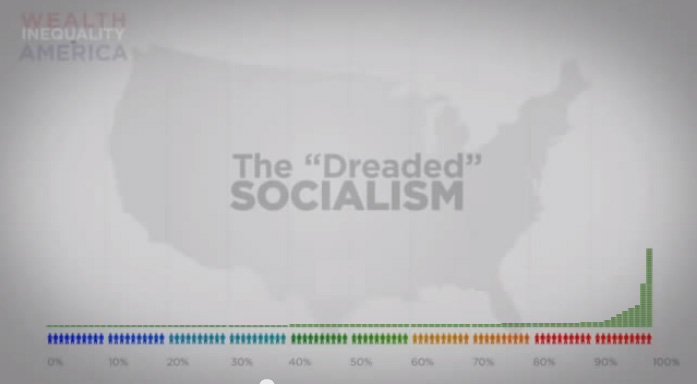 Not only is the distribution curve skewed to the “rich” administrators of such societies, but the total amount of wealth to be “distributed” is so dramatically lowered that the average person lives in austerity – albeit more equally.

The presenter, and the 5000 polled, assumed that the amount of total wealth remains the same regardless of system or outcome, but that is false, and can be demonstrated to be false.

The dreaded socialism anywhere outside of a University classroom or YouTube video much more closely resembles a system of monarchy and serfs.

What about Sweden? Ask a Swede.

The presenter avoids the experience of the real world, leaving the viewer with the idea that the dreaded socialism is ‘not so bad,’ and then moves on to the so called “ideal” curve: 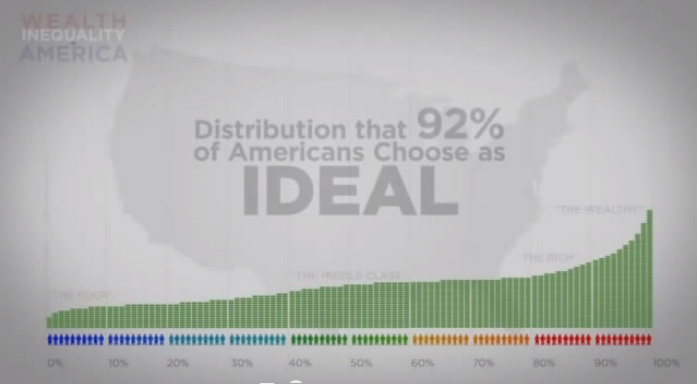 The video says the wealthiest people are 10 to 20 times better off than the poorest American and adds that, “This isn’t too bad.”

Isn’t too bad? Compared to what?

The shape of a curve tells nothing whatsoever about the condition in which real people live. Pol Pot was about 10 to 20 times better off than the poorest Cambodian who lived in misery before dying in a labor camp.

The presenter seems to be quite impressed that 92% of Democrats and Republicans thought this curve was ideal, but why should it?

Wealth should not be decided at the ballot box. But rather by individual people who vote with dollar bills in a free market.

If that market is free and fair – which ours unfortunately is not – then whatever the curve ends up being is the right curve.

The outcome that matters is in the ‘real’ world, not a curve on a chart.

The video then moves on to discuss the “real” curve, describing it this way:

Here is the actual distribution of wealth in America. The poorest Americans don’t even register. They’re down to pocket change, and the middle class is barely distinguishable to the poor. 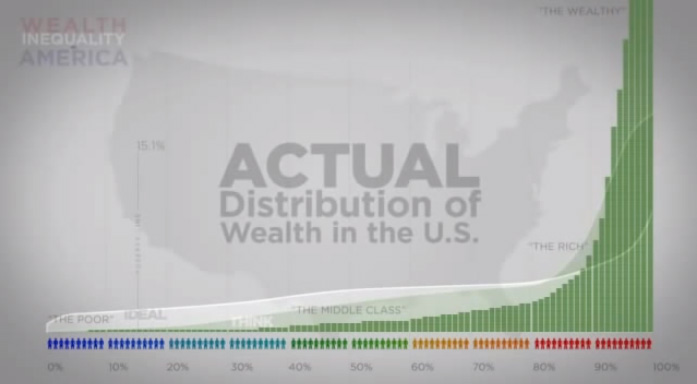 It’s a good thing that people do not live on charts.

Although the video laments that the “curve” has kept getting worse over the past 30 years, in the real world life is getting better across the economic spectrum.

These are all vast improvements in the real world for real people over the past 30 years. 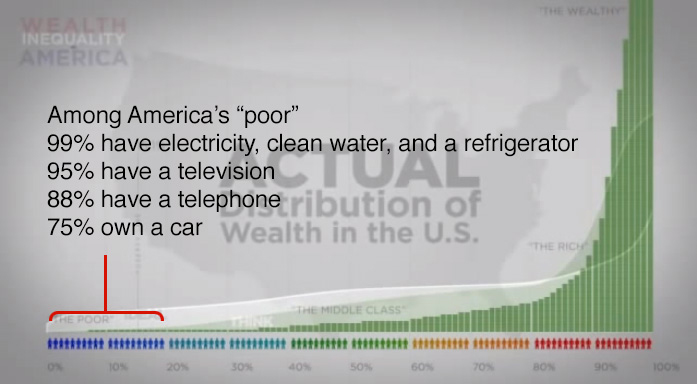 The video continues with this popular fallacy:

And the top 1%, this guy, his stack of money stretches ten times higher than we can show. Here’s his stack of cash restacked all by itself. So much green in his pockets that I have to give him a whole new column of his own, because he won’t fit on my chart.

Oh my God! He won’t fit on the chart, people! This is a chart emergency!!!

Okay, take a deep breath. No where but in cartoons and in this video do very wealthy people have a big pile of money that they are selfishly hoarding.

In fact, most of their wealth is held in some other form of asset, whether in businesses (that employ people), or real estate (that gives people a place to live or work), or in other assets that serve society in some way.

The video breaks these assets down to a dollar value to make a point, but the point is wrong.

Even supposing a ‘worst case’ scenario, lets say some rich guy has an offshore bank account in the Cayman Islands with a billion dollars in it. What do you suppose the bank does with the money?

If you think that they pile it in a vault and lock it up for safekeeping, you are very mistaken.

First of all, the vast majority of money does not exist in a paper form that could be put in a vault. Most money today is just an electronic ‘credit’ in a computer.

A Bank will lend some of the billionaires credits out to other people or businesses, to build a house to live in, or a factory to create stuff and jobs. Much of the rest will be used to purchase bonds, most likely U.S. Treasuries.

And what are those bonds used for? Oh things like building bridges, veteran’s benefits, welfare, warfare, food stamps, Pell grants, and every other thing that government wants to spend money on.

The wealth is already being distributed, whether rich greedy people want it to be or not.

This is not to say that all rich people are saints.

There are great fortunes being accumulated right now by fraud, corruption, and larceny. It is these immoral practices that are the enemy of society, and need to be opposed wholeheartedly and weeded out.

Its not the money, stupid.

But by simply focusing on money, the video disguises the distinction, providing cover for fraud and replacing it with class warfare. This video is hate speech.

I’m sure many of these wealthy people have worked very hard for their money. But do you really believe that the CEO is working 380 times harder than his average employee?

Although many do, CEOs are not compensated for “working hard.” They are compensated for responsible decision making, and risk management that can involve billions of dollars, often their own.

If the average earner does not like it, then he should quit and become the CEO of his own company. The fact that so few do, tells us something very important about the real inequality in society.

The video concludes that the ‘solution’ to its fictional problem is somewhere in between what we have now and socialism:

We certainly don’t have to go all the way to socialism to find something that is fair for hardworking Americans.

But to presume to know what is “fair” and to implement it by decree is, “The Fatal Conceit.”

No one knows what a “fair” outcome is.

Not me, not you, not the man in the moon.

The best we can strive for is a “fair” playing field. Unfortunately, we are quite far from it at the moment, and sadly, videos like this one are a step further away.