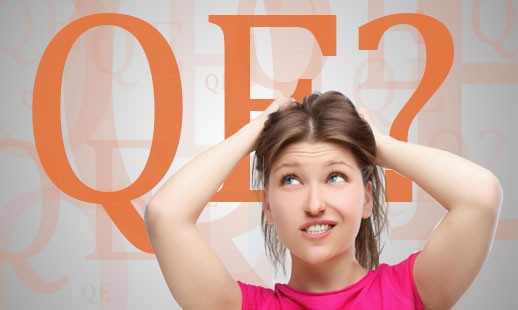 The Fed has been hinting that it might bring an end to QE sometime soon. Markets have been panicking at that prospect.

Since most people don’t have the foggiest notion of what the heck QE is, this article will attempt to explain it in plain English, along with some thoughts about the ensuing panic.

It can be either good or bad, depending on one’s point of view.

If you happen to be a ‘too big to fail’ bank that bought a truckload of mortgage-backed securities that are now worthless, then you will be VERY happy to sell this trash to the Fed. These purchases are in effect, an ongoing bank bailout to the tune of $40 billion per month.

If you happen to be the head of Goldman Sachs, JP Morgan, and gang, then you will be very pleased that the average person has no clue what is happening. You will laugh and laugh as the ‘occupiers’ protest Exxon, Walmart, and “capitalism”, while money is being shoveled into your accounts for not providing any service at all.

When the banks get this money it has to go somewhere. Since they are still unloading the crap mortgages that got them into so much trouble, lending it to people is not very appealing. So this money is going mostly into the stock market, precious metals, and other commodities – driving prices up.

If you are invested in stocks or gold or silver, then QE has probably given you a nice little boost, and will probably continue to do so – for a while. But here’s something to keep in mind: although the ‘numbers’ are going up, the actual value of things is not.

The Fed is aware of this. Its what they want to do. They even have a cute name for it, they call it “the wealth effect.” Its an ‘effect’ because no new wealth is created, but when the numbers go up, people ‘feel’ wealthy. People who feel wealthy are more likely to spend their money, and the Fed hopes that the spending will create jobs.

It probably will – for a while.

QE is also good news for homeowners, especially those who took a hit with falling prices over the past few years, because it will keep interest rates low, which basically props prices up, and lowers the pressure on banks to dump their inventory of foreclosures.

QE is fantastic news for incumbent politicians, as they will be able to point at the artificial QE boom as an ‘economic recovery’ and claim their wise policies are to be credited, although in reality they had practically nothing to do with it.

So what’s the problem?

As the inflation in financial instruments trickles down to the consumer economy, people on fixed incomes, like pensioners, those holding large amounts of cash perhaps hoping to purchase a home, and even children with piggy banks, will be losers.

This may take awhile, or it may happen quickly. No one really knows for sure, but they do know it is happening. The rating agency Egan-Jones recently lowered the credit rating of the US from“AA“ to “AA-“

The US is losing credibility and purchasing power.

This will have short-term benefits for exporters (creating jobs) but cause long-term harm to everyone else (less purchasing power).

The vaunted “wealth effect” is sort of like the “energy effect” of using amphetamines. It creates activity and good feelings, but it is neither healthy nor sustainable. Once the high wears off, the good feelings are gone.

Economically speaking, the ‘wealth effect’ simply creates a ‘boom’ that must eventually be followed by a ‘bust.’

In the short term, QE is going to be a party, but in the longer term, it is going to result in one hell of a hangover.

But if QE were the path to prosperity, then Zimbabwe would be the wealthiest nation on earth.