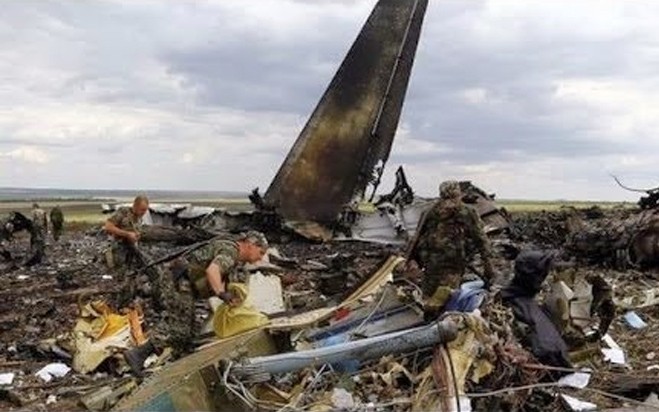 Not surprisingly, the Russian Union of Engineers accuse the Ukrainian Air Force of shooting down the Malaysian passenger jet.

And equally without surprise, the Western media has nothing to say about the report. There is no interest in anything other than pre-ordained, self-serving conclusions among Western journalists. They simply report what they are told by their bosses.

But the Russian report doesn’t leave open the option that MH17 was downed by a ground-to-air missile, something all other sources have labeled the most likely explanation.

Instead, The report claims the plane was attacked by a fighter jet, and that, since the east Ukraine rebels have no such jets, and multiple sides have confirmed there were no Russian jets in the vicinity, this jet had to have been Ukrainian air force.

At the very least the report should be broadly discussed in western media, and western experts asked to refute what parts of it they find fault with.

The full report can be downloaded here.

9.1. In relation to the circumstances of the crash of the Malaysia Airlines Boeing 777 jet.

The Malaysia Airlines Boeing 777 was carrying out the 17.07.2014 flight Amsterdam – Kuala Lumpur in the flight corridor established by the dispatchers. At the same time, it is likely that manual control was turned off and the plane was on autopilot, flying in a horizontal plane along the route laid out and adjusted by air traffic controllers on the Ukrainian side.

At 17.17-17.20, the Boeing 777 was in Ukrainian airspace near the city of Donetsk at the height of 10100 m. An unidentified combat aircraft (presumably a Su-25 or MiG -29), which was a tier below, on a collision course, in the cloud layer, sharply gained altitude and suddenly appeared out of the clouds in front of the civilian aircraft and opened fire on the cockpit, firing from a 30 mm caliber cannon or smaller.

The pilot of a fighter jet can do this while in “free hunting” mode (using onboard radar) or with the help of navigational guidance using airspace situation data from ground-based radar.

As a result of multiple hits from shells there was damage to the cockpit, which suddenly depressurized, resulting in instant death for the crew due to mechanical influences and decompression. The attack was sudden and lasted a fraction of a second; in such circumstances the crew could not sound any alarm as the flight had been proceeding in regular mode and no attack was expected.

Since neither the engines or hydraulic system, nor other devices required for the continuation of the flight were out of commission, the Boeing 777, running on autopilot (as is standard), continued on its horizontal flight path, perhaps gradually losing altitude.

The pilot of the unidentified combat aircraft maneuvered to the rear of the Boeing 777. After that, the unidentified plane remained on the combat course, the pilot provided a target tracking aircraft equipment, took aim and launched his R-60 or R-73 missiles.

The result was a loss of cabin pressure, the aircraft control system was destroyed, the autopilot failed, the aircraft lost the ability to maintain its level flight path, and went into a tailspin. The resulting overload led to mechanical failure of the airframe at high altitudes.

The aircraft, according to the information available from the flight recorders, broke up in the air, but this is possible only in the case of a vertical fall from a height of ten thousand meters, which can only happen when the maximum permissible overload is exceeded.

One reason for stalling and going into a tailspin is the inability of the crew to control the aircraft as a result an emergency in the cockpit and the subsequent instantaneous depressurization of the cockpit and the passenger cabin. The aircraft broke up at a high altitude, which explains the fact that the wreckage was scattered over the territory of more than 15 square kilometers.

9.2. In relation to the party responsible for the death of 283 passengers and 15 crew members.

On 17.07.2014, the armed forces of the self-proclaimed Donetsk National Republic had no relevant combat aircraft capable of destroying an aerial target similar to the Boeing 777, nor the necessary airfield network, nor the means of radar detection, targeting and tracking.

No combat aircraft of the Armed Forces of the Russian Federation violated the airspace of Ukraine, which the Ukrainian side confirms as well as third parties who conduct space surveillance over the situation in Ukraine and in its airspace.

To establish the truth, it is necessary to objectively and impartially investigate all the circumstances of the destruction of the Malaysian Boeing 777, to interview the thousands of citizens who may have seen something. Naturally, experienced professionals should conduct the surveys. To ask the right questions – this is a rigorous science, and a great art in advancing the truth. Important information is contained in the wreckage of the aircraft and the remains of the dead, but this precise information is easy to destroy, distort and hide. And there are plenty of parties interested in concealing the real facts.

Procrastination and the evasion of an objective investigation by all sides, with the participation of prestigious international organizations, raises doubts whether the concerned parties will make public the true circumstances surrounding the crash of the Malaysia Airlines Boeing 777.