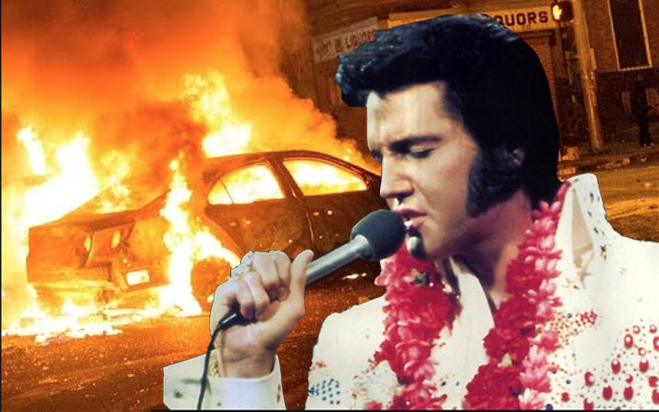 Baltimore burns, that much is sure, but who is to blame?

In this world of plenty, there is more than enough blame to go around. But in pointing the finger, people forget that three fingers are pointing back at themselves.

There is nothing moral or just about looting and violence – yet, the mobs in the streets are understandable.

It is a predictable reaction, to the policies of both the Right and the Left.

The Right says that if you don’t want problems with the police, then don’t break the law.

But that’s not what Baltimore is about. The issue is that the police can kill without consequence.

Wearing the badge offers immunity to the gun-bearer. There are examples of this almost every day, yet only a few draw attention – and usually only after video evidence contradicts the official story.

Supporting law and order is a just cause, but what if the enforcers are above the law?

And it isn’t only within the police; what of the prosecutors, the judges, who look the other way?

When guilt is beyond denial, when punishment inevitable, what is the outcome for murderers with a badge?

One woman in Baltimore gave voice to the hypocrisy, “The police should be under the same law as the rest of us.”

A nation of laws, not men. There was a time when this was true, when even the President was below the law with only the duty to uphold it – nothing more.

The Right offers sentiments such as: obey orders and you won’t get hurt; if you don’t do anything wrong, you have nothing to fear.

Of course, even these aren’t completely true – what of the SWAT team breaking down the wrong door? What of throwing a grenade into a baby’s crib?

Yet, what if the world you live in is one where those you are told to obey often kill with immunity?

I suspect if this happened as often in upper-middle-class white communities we would have heard about it – I suspect something would even have been done about it.

Elvis Presley gave voice to this notion, “People, don’t you understand, the child needs a helping hand, or he’ll grow to be an angry young man some day. Take a look at you and me, are we too blind to see, do we simply turn our heads, and look the other way…”

And so, in this moral crusade, led by the perpetrator of the Vietnam War and a drug addicted singer, trillions of tax dollars were plunged into programs of social uplift.

In Black America, where the illegitimacy rate was 23 percent in 1965, it is 72 percent now. And the dropout rate, crime rate, drug use rate and incarceration rate are all far higher now than in 1965.

Guaranteed income for simply having a baby, without any need for responsibility, is a recipe for disaster. Every study yet conducted shows that children raised without fathers are at higher risk for drug use, criminal behavior, and problems in school.

When legal employment is out of reach, other opportunities are secured, like dealing drugs.

The work ethic has been eviscerated by an endless flow of social welfare benefits – with pay raises offered for promiscuity.

Property without effort results in no respect for property.

Life without effort results in no respect for life.

Don’t point to individuals that have found a way to break out of this hell that the left has created for them – there are always exceptions to any rule.

Far more often than not – incentives have a way of achieving what they incentivize.

The right demands law and order, and thus police are free to kill with immunity.

The left demands compassion with your money, hence generations grow without any idea of respect for life and property, and no knowledge of how to productively contribute to society.

There is nothing surprising about Baltimore.