September 5th, 2015
Who Gave Us the Weekend & Saved the Children? 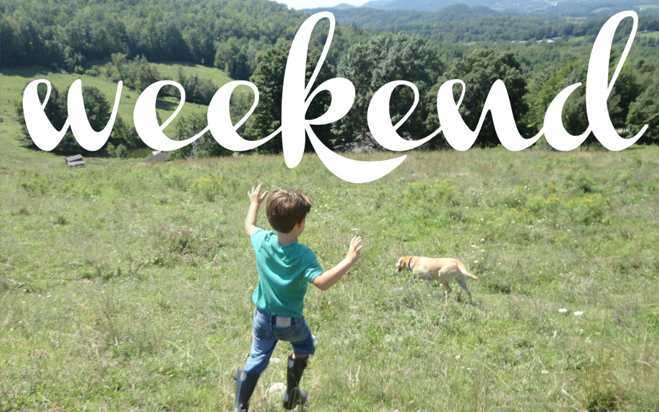 Way back in the old days, sometime in between the dinosaurs and the Miley Cyrus, people had to work really hard just to survive.

Men, women, and children were chasing buffalo, picking berries, fighting off lions, and doing it all without smart phones. Yes, it was that tough.

Well some wise gal noticed that if they planted a few berries instead of eating them all, then there’d be a whole lot of berries in one place next year. The fancy-schmancy name for this is ‘savings and investment.’ 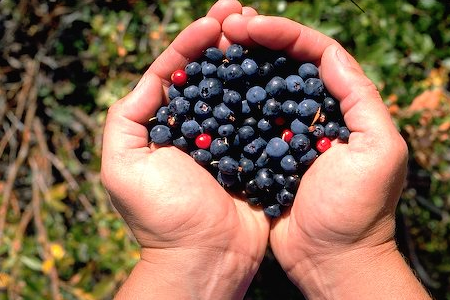 Well the rest of the berry pickers liked this idea a whole lot. For one thing it meant that they didn’t have to move their tents around so much, so now they’d have more time to decorate.

But not everyone was happy, Johnny Hunter said, “This berry picking idea is putting hunters out of work. We have to create a Hunter’s Union to protect our way of life!”

Ms. Wise gal then said, “Why don’t you take some sticks and build a circle around the animals you hunt? That way they won’t be able to run away.”

Well, Johnny Hunter didn’t like this idea at all, I mean, it could destroy the hunting industry that the economy had depended on for millions of years. The other hunters agreed, “Yeah! Think of all the unemployment it’ll create.”

Well, Frank Schlebrock never did much like taking orders from Johnny Hunter, so he built a circle out of sticks and called it a fence. In fancy talk, this is called ‘technological innovation.’ 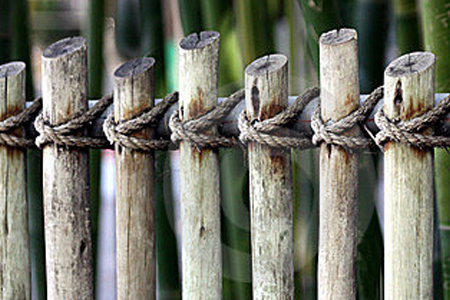 Well, that fence worked so damned well that the tribe never had to move again to chase their food down. It was truly amazing how much time could be saved with just a bunch of sticks.

Over time that settlement grew into a town, and then Johnny Hunter ran for mayor, promising that ‘he’ would provide prosperity for all.

The people did grow prosperous, though it wasn’t entirely clear what Johnny Hunter had to do with it.

There was so much food that people didn’t have to work all the time to get it. But then something strange happened… they kept working anyways.

It all started when Marsha Cratebarrel came home from visiting her neighbor. She explained to her husband, “Do you know what Agatha Stonebottom has in her hut? A glass bowl.”

Well her husband didn’t even know what glass was. But after Marsha explained it to him and that there would be no more smoochey games in their hut until she too had a glass bowl the consumer society was born.

Some wise apple was always coming up with some sort of new thing that everyone else seemed to want, and he could then use these things to get more of whatever he, or Marsha Cratebarrel wanted.

To make things easier all these peddlers of glass bowls, horse stirrups, iPods, and wicker baskets set up a big area to make this trading easier, they called it a market.

The people loved it.

But Johnny Hunter was alarmed as he didn’t really have anything of value to trade with all these producers of goods. So instead, he came up with a speech, “Good people of Townsville, it has come to my attention that the market is creating obscene inequalities between the people.”

The crowd gasped in astonishment. Why there were people on the outskirts of town who were still using stone bowls. Spurred on by their reaction, Johnny Hunter threw in, “And… she has a color TV!”

Well the crowd didn’t really know what a color TV was, but they knew it was way too unfair for Agatha Stonebottom to have one when they didn’t.

Johnny Hunter rallied the crowd, “Do you know how many people live in this village?”

“That’s right, and Agatha Stonebottom is just one person. What percentage of us does that make her?”

But the crowd was silent, for the pocket calculator had not been invented yet.

One guy said, “I don’t want to pay you to regulate me.”

Well Johnny Hunter was ready for that guy. “Good people of Townsville, one man among you all hates children so much that he refuses to cooperate in our grand plan. Do any of you others hate children so much?”

Well, no one wanted their neighbors to think that they hated children, so they just kept quiet. And Johnny Hunter started getting all of his stuff in exchange for hot air. A few people didn’t like this so much, but they stayed quiet too.

One day, Billy Cartpuller had an idea. He told his wife, “You know, if I were the only person allowed to pull carts, I could charge a lot more for pulling them.”

His wife said, “Don’t be stupid, anyone can pull a cart and there isn’t a damn thing you can do about it.”

Well, Billy didn’t like that at all. ‘I’ll show her’ he said to himself, and went to talk to Johnny Hunter about it. Johnny Hunter knew just what to do, “What you need Billy is to form a ‘team’ of cart pullers.”

Billy said, “I don’t really have time to organize a team, I barely make enough money pulling my cart.”

“Billy, Billy, you can charge a membership fee to join the team and then you won’t have to pull a cart at all.”

Billy liked that idea a lot. Then he could just sit around like Johnny Hunter all day. But he wondered, “Won’t that cost people more to pay for a cart to be pulled and to pay for the membership that goes to me?”

“Then why would anyone do it?”

“Well Billy, me and my friends can pass laws to regulate cart-pulling, for the sake of the children of course. And you can use your team members to get in the way of anyone who ‘unfairly’ competes with you.”

“And you’ll go along with that?”

“Yes I will Billy. All I ask in exchange is that you ask the team to vote for me. I am for the working man after all. Say, what do you use to pull the carts anyways?

“Hmm, a team of teams, well then, you can call it the ‘Teamsters.’”

Billy put his team together, and he did some real nice things for the members of the team, like free clubs to beat up non-members with as well as free band-aids should any hit back. Naturally, clubs and band-aids don’t fall off of trees, they had to be paid for, but the cost was just passed along to people who hired carts.

It was a win for cart-pullers, a win for Billy, and a win for Johnny Hunter too. Not so much for the people who hired carts, but screw them, they weren’t on the team anyways.

Well, this worked so well that the stone cutters started up a team too, as did the clockmakers, the brick pilers, the shit shovelers, the medicine men, the boat builders, the wire melters, and so on.

At the same time as all this teambuilding was going on, more and more work saving innovations were happening too. So much time and labor was being saved that most of the children didn’t have to work anymore, but some still did. 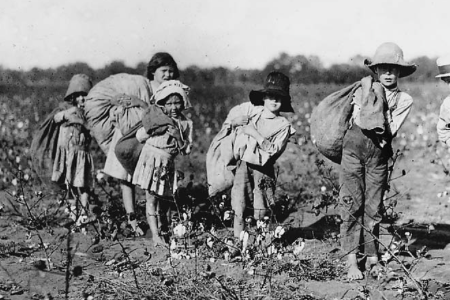 But these new time saving thing-a-bobs were almost never invented by the “teams.” It was always some wise-ass who was trying to put them out of a job, and who probably hated children too.

Just like back when Frank Schlebrock invented the fence.

Well, Johnny and Billy and all the other team leaders were ready for them this time. Every time a new labor saving device was invented, they’d make a new team for it. So if someone invented a new button, the International Team of Buttonpushers would soon be formed to push it.

Although all the team members now had fences and glass bowls of their own, they still didn’t like the Schlebrock’s and Cratebarrels of the world. In a few places the workers hated them so much that they chased those fancy folks right out of town, creating worker’s paradises where for some reason there was never enough food or toilet paper.

As all these new time-saving devices kept being invented, people were spending less and less time working, and more and more children were going to school. There they could learn reading, writing, rithmetic.

In one town, hillbilly Henry invented a big machine that took steel, rubber and leather in on one side, and spit automobiles out the other. Well the Teamsters had a good laugh at hillbilly Henry, “Who would want an automobile when all the roads are built for horses?”

Yes indeed. Who would want such a thing?

Well, Henry just ignored the teams and started making automobiles as fast as people wanted them, and that turned out to be pretty quick. Henry’s factory saved so much time that in 1926 he gave his workers a gift.

You see, Henry was a religious man, and he wanted his workers to attend church on Sunday and to be presentable before God, so Henry gave them Saturday and Sunday off.

And so the weekend was born.

Brought to you not by Billy Cartpuller or Johnny Hunter, but by a Bible-thumping hillbilly who made cars for profit.

Well, that was a big problem for the other teams, and for Johnny Hunter too. I mean, if that hillbilly could just give people weekends off, they why would anyone want to join a team? or vote for Johnny Hunter?

This is when teams started demanding weekend’s off too. Not because they were so darn productive in serving their fellow man, just, well, you know, because, it’s more fair or something.

Well Johnny Hunter’s great grandson Frankin D. Hunter saw how popular this weekend thing was and had a law passed giving everyone the weekend off so he could be popular too. Franklin was really good at staying popular, which was a good skill to have since the country was in a mess the whole time he was in charge.

Of this law Franklin said it made him, “happier than any other one thing…since I have come to Washington, for the code abolished child labor in the textile industry.”

See, he really did do it for the children.

And so the legend of how unions and government, err, I mean teams and Johnny Hunter brought you the weekend was born. You can learn all about it in government schools staffed by union employees, so it must be true!

And if you don’t agree, well, I guess you hate children.